The 2021/2022 fire season in Australia looks a little different this year with regards to the Type 1 helicopter fleet. Traditionally the domain of the S-64 Air-Crane, there is now a new type available to Australia’s fire agencies. The National Aerial Firefighting Council (NAFC) in conjunction with the Australasian Fire and Emergency Service Authorities Council (AFAC) announced the awarding of two contracts to Coulson Aviation Australia to supply the CU-47 Chinook to both the New South Wales Rural Fire Service and the Victorian State Government with a single example.

The next evolution of Type 1 Helicopters in Australia began with the arrival of Coulson’s N40CU and N42CU CH-47 aircraft arriving for use in New South Wales and Victoria respectively. The two machines arrived at the docks in Melbourne, Victoria where they were assembled and flown out to be positioned at their new operating bases at RAAF Richmond for N40CU and Essendon Fields Airport for N42CU.

When Coulson-Unical took possession of the CH-47D, the aircraft went into heavy maintenance, consisting of structure mods, avionics upgrades, and the installation of the Retardant Aerial Delivery System (RADS), capable of carrying 3000 US-gal. (11,356. lt.).  The RADS-L is an internal tank system with controllable doors to disperse firefighting fluids at a constant flow rate and desired quantity through the belly of the aircraft. The Coulson Boeing CH-47Ds is fitted with a retractable snorkel which does not place any restriction on the forward speed of the helicopter. The CH-47D also has the ability to be ground filled with retardant and any other approved suppressant through the installation of a delivery system capable of injecting Class-A foam and polymer (Gel).

Modifications to the controller employ the latest digital processing technology to optimize the flight crew interface keeping it simple, clean, and intuitive while customizing and optimizing every aspect of the payload delivery.   Some of the unique features of the RADS Next Gen Controller are: 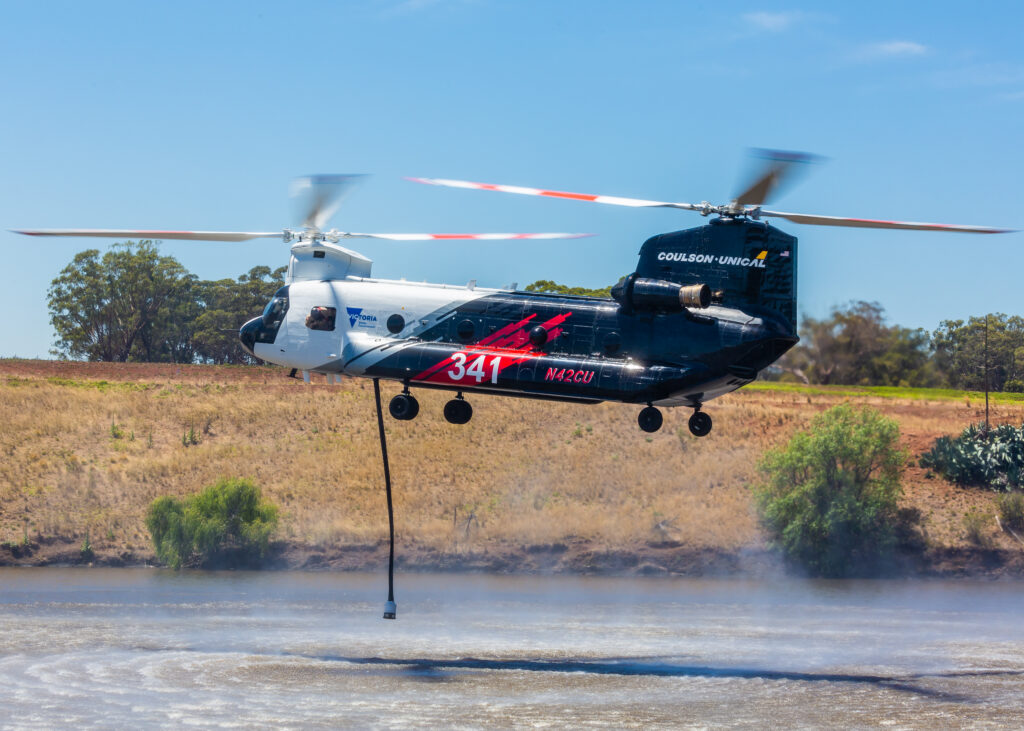 All Coulson flight crews are equipped with ANVIS-7 night-vision goggles and the cockpit are night-vision-goggle (NVG)-compatible.

Going forward the Coulson CU-47s will be a fixture in New South Wales and Victorian skies during fire season with the company securing a four-year contract to operate them in support of firefighters on the ground.

The two Chinooks, are joined by a single Sikorsky S-61 on contract in Victoria with the Lockheed C-130Q covering New South Wales, along with the NSWRFS/Coulson operated Bell 412, Cessna Citation, and Boeing 737 Fireliner fleet. Western Australia is also covered with a 737 Fireliner based there currently with the support of the Australian Federal Government.

Dave Sodestrom
Dave Sodestrom is a writer and photographer based in Victoria, Australia, and is one of the founders of Aviation Spotters Online.

Comments
Previous articleThe Aerial Firefighting Industry: A Voice in the Wilderness
Next articleThe Drop – Why Stay Silent: It Could Save a Life