The 2021 fire season saw Greece at the forefront of the world stage as the most devastating fire season in many years to hit the country. The largest fires occurred in the Northern part of Evia Island and Western Attica, causing severe ecological destruction for the small Hellenic nation.

The 2021 firefighting season in Greece saw a 632% increase in areas affected by wildfire compared to the 2008-2020 seasons, including a 130% increase in wildfire activation throughout the country. This resulted in the burning of 1,550,000 acres, according to published data from the Greek Forestry Service. Compared to the rest of Europe during the 2021 season, Greece ranked first in the severity of wildfires, followed by Turkey and Italy. 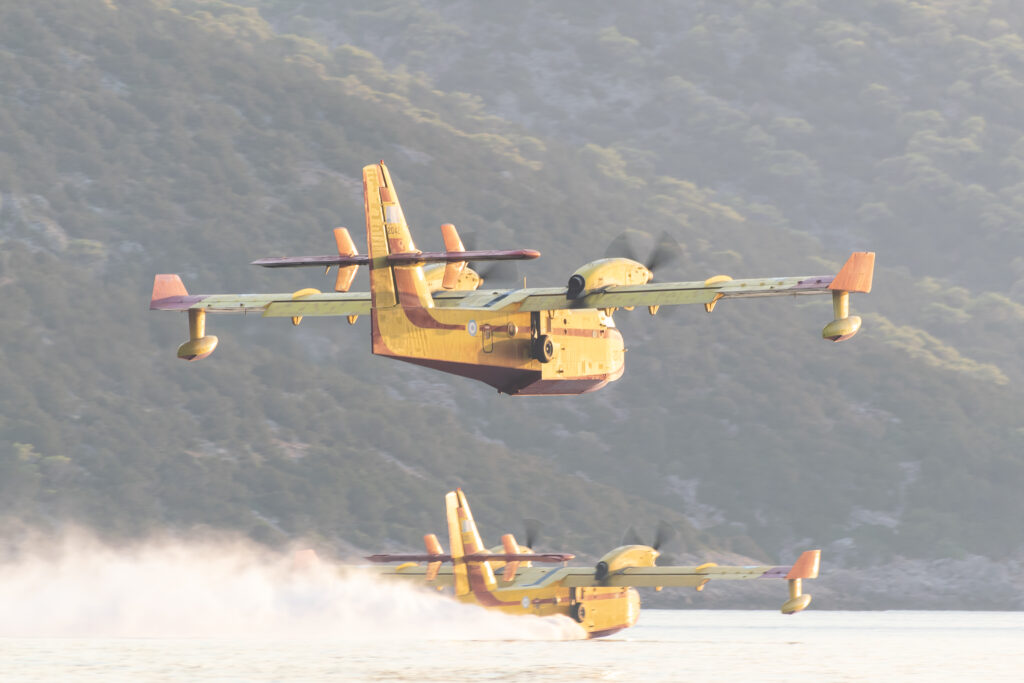 This year’s megafires in Greece, along with the total burnt area:

According to Greek authorities, arson was sadly one of the major causal factors of the 2021 fire season. Seventy-eight suspects were arrested in forested areas during the 2021 season, 56 cases related to negligence, and 22 cases attributed to deliberate acts of arson. Through published Greek data, authorities attributed 64% of wildfire-affected ignitions in Greece to human factors, with  26% attributed to unknown causes and 10% to natural causes.

Meteorological forecasts in Greece had warned of increased temperatures and fire risk brought on by climate change, the total area of wildfire affected throughout Greece in 2021 was 324% higher than the 2020 season, with a 220% increase in forest fires, with the greatest occurrence of wildfires in 2021 occurring throughout August.

Aerial firefighting operations in Greece are usually conducted by various squadrons of the Hellenic Fire Corps, the Hellenic Army Air Corps, and Hellenic Air Force, along with significant contributions by civil contractors including Erickson Air Crane Inc., who provided a fleet of S-64Es along with engineers and pilots stationed throughout Greece. 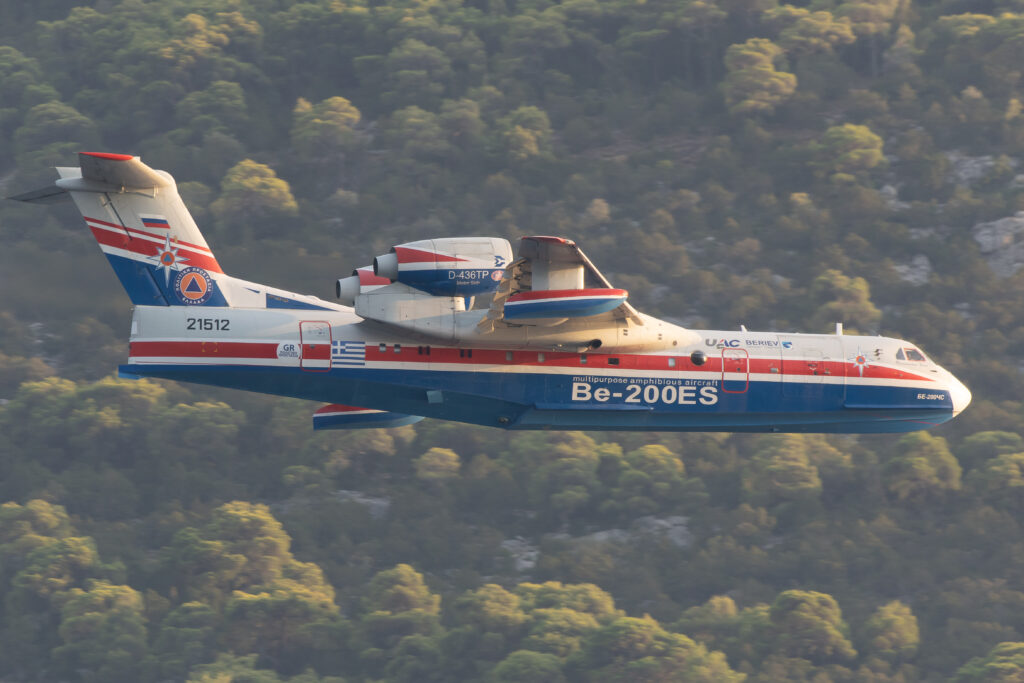 Fixed-wing assets in Greece consisted of a fleet of  PZL (Mielec) M-18B “Dromader” aircraft, affectionately known as “camels,” the original version of the Canadair CL-215s and two variants of the CL-415, CL-415GRs, and CL-415MPs, with the latter being also capable of undertaking SAR missions. Rotary assets used in Greece include CH-47 Chinooks from the Hellenic Army Air Corps and 2 Super Pumas from the Hellenic Fire Corps who use a Bambi bucket.

In 2021, Greece leased assets from Russia, Australia, and the U.S. in anticipation of the increased fire danger. Apart from the annual leasing of a Skycrane fleet from Erickson, Greece leased two Bell helicopters (with Mitilineos Group leasing an additional 4 Bell Helicopters) from McDermott Aviation, 6 Air Tractors from Pay’s Aviation Services including 4 Fire Boss aircraft, 1 Beriev Be-200ES from Russia and a fleet of Mil Mi-171s.

Greece’s first responder aircraft, the PZL (Mielec) M-18 Dromader aircraft, manufactured in Poland intended for export, were purchased by Greece in 1983 and replaced an aging fleet of Grumman biplanes. The aircraft was initially used in crop-dusting and firefighting, and they now are exclusively used as firefighters. They can carry 2500 liters (660 Gallons) of water.

To conduct efficient fire operations, Greece’s fleet of piston-engined CL-215s, limited by ambient temperature during startup, were forced to relocate assets to island airports offering a cooler environment to allow the aircraft to take off. Combining a top speed of 157 knots and the ability to load 5000 liters (1350 Gallons) of water in 12 seconds, the CL-215s have been a firefighting asset in Greece for more than 45 years.

Greece later invested in the CL-415GR model, which, with two Pratt and Whitney PW123AF engines, lifted the restrictions of the previous model while increasing the aircraft’s top speed to 194 knots. The CL-415GR is a further improved version from the original Super Scooper, with a higher load capacity of more than 6000 liters (1585 Gallons) of water. Comparing the two aircraft, the CL-415 can operate on-site until the last light of the day, while the CL-215 is limited in not being able to operate at night in Greece. At the same time, the 415 has night landing capabilities and can return after civil sunset. 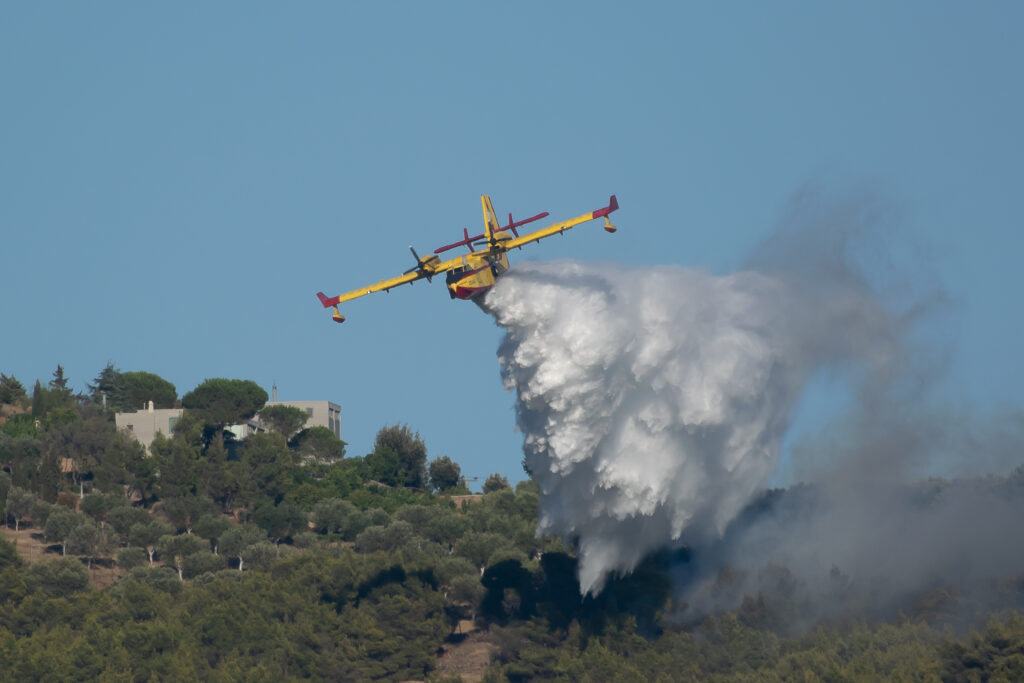 Regarding the modernization of the firefighting fleet, Greece’s former secretary of Civil Protection mentioned the possible evaluation and purchase of 8 Viking Air CL-515s in the future, which would allow nighttime operations. This investment would come through the funds of the AEGIS program, along with the imminent replacement of the aging PZL fleet.

After the devastating fires in Varimpompi and Northern Evia broke out, Greece requested assistance from any country that could assist, resulting in a massive international response. Qatari, Romanian, Ukrainian, Polish, and French firefighters traveled to Athens and immediately jumped into action. Swedish, Cypriot, and Israeli Fire Bosses, Croatian and Spanish Canadair CL-415s came from neighboring Turkey, assisting in the large Antalya wildfire. Russia supplied three Mil Mi-8 helicopters and 2 Illyushin Il-76TDs. Unlike the other aircraft, these operate like VLAT aircraft, reloading at the airport, capable of dropping 1333 Gallons of water each.

“To effectively manage and tackle the problem of forest fires, the specific characteristics of each region, such as fuel types, landscape, weather, and even the social or economic aspects have to be taken into consideration,” said Dr. Miltiadis Athanasiou, an expert in forest fires who holds a Ph.D. in Wildfire Science from the National and Kapodistrian University of Athens.

“In ideal conditions, after assessing the threat to the natural and anthropogenic environment, we have to act with preventive public policies. Agroforestry fuel management that matches the green and circular economy and public awareness objectives will help prevent mega-fires. Those efforts reduce fire hazards in strategic locations, mitigate the fire risk, and facilitate fire suppression. There are no ‘cure-all solutions’ to the fire problem. We have to help the public learn and act to build community wildfire resilience,” he continued. 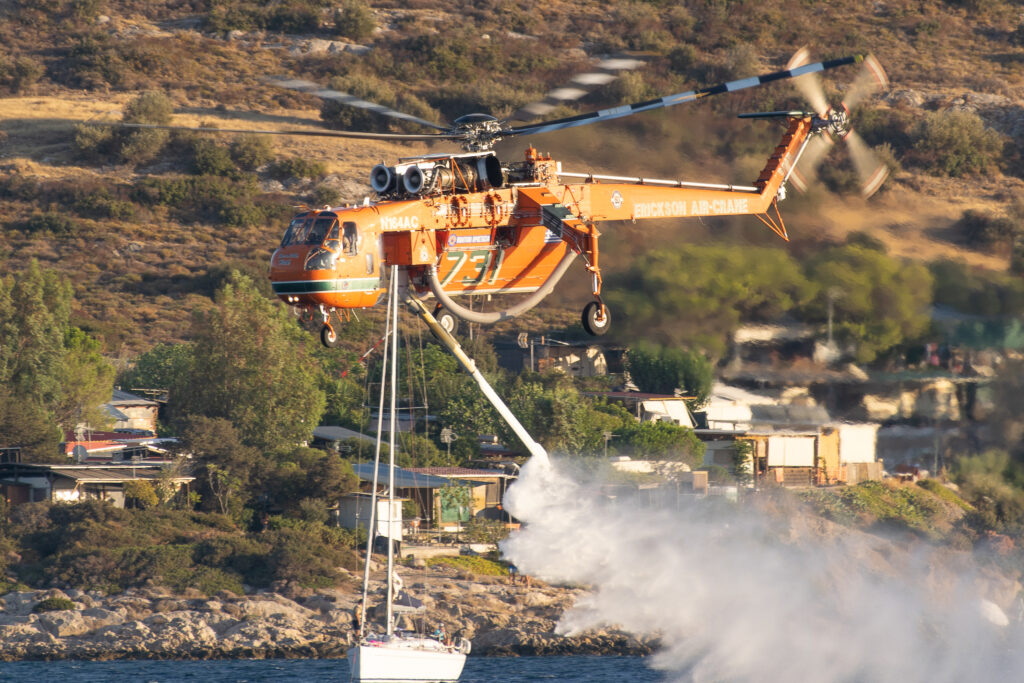 “The fire broke out at noon on the outskirts of the village of Ziria and quickly escalated due to the strong winds that day. The Fire Department rushed to the area and quickly attempted to contain it with the help of the local people. The aircraft arrived roughly three hours after the fire began. The residents attempted to put out the fires, contain them, and keep them outside the village. The Civil Protection Authority’s EAS sent an evacuation order for the villages, including mine and a sports camp located in the region, as the fire was moving towards their locations. It was certain that the fire could not be contained and would reach the shorelines, burning everything in its way. After soaking outhouses with water and locking windows and doors, we moved towards Aegion, hoping that our house wouldn’t be burnt down.” said Nikos Giannopolis, a resident of Loggos village.