As wildland summer fire seasons extend into autumn, and the fires, themselves, become increasingly destructive and widespread, aerial tankers must be ready to fly on a moment’s notice.  For Neptune Aviation Services, that mandates a 99+ percent dispatch reliability rate for its fleet of nine BAe 146-200s tankers, converted from regional airliners to retardant dropping aircraft by the company.  Neptune, in fact, became the world’s first operator of the BAe 146 in an aerial firefighting role, with the deployment of its first one as an air tanker in 2010.

The near-perfect dispatch rate, which would be the envy of most commercial airline operators, is due to Neptune’s aggressive winter maintenance program, carried out at its Missoula Montana Airport (MSO) headquarters and maintenance complex.  Another major contributor is the aircraft itself, but in order to appreciate that, it is necessary to have some understanding of why Neptune selected the BAe 146 to replace its fleet of 11 Cold War Era, ex-Navy P2V Neptunes. 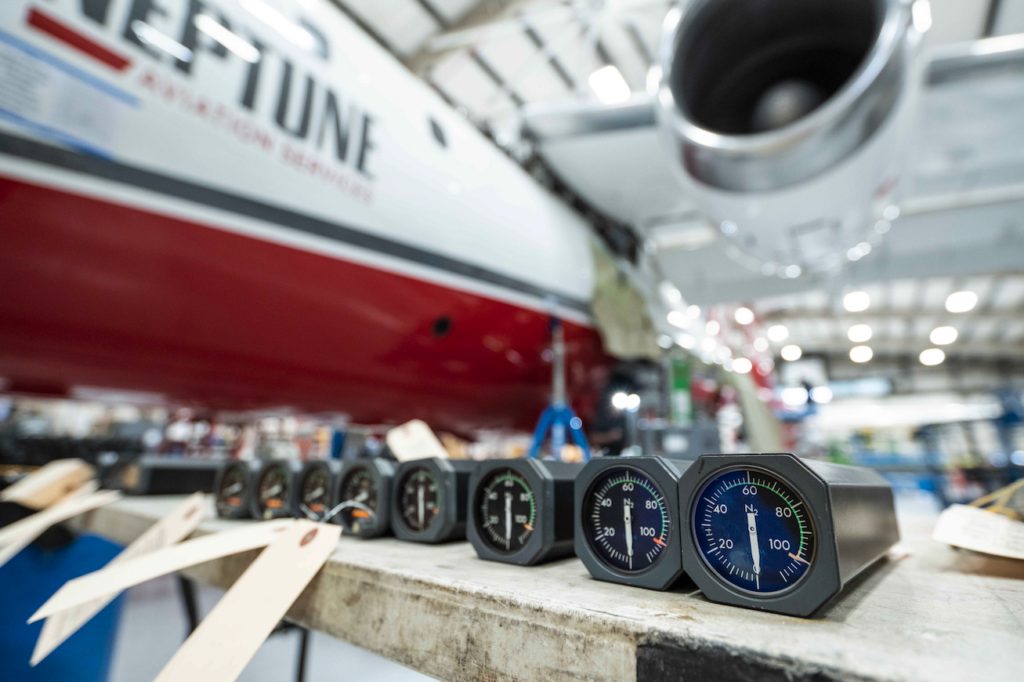 As far back as 2006, Neptune realized that the aging Lockheed-built anti-submarine patrol aircraft could not be kept in service indefinitely, and a replacement would have to be found.  Since the P2Vs were no longer supported by Lockheed-Martin, successor company to the original equipment manufacturer (OEM), Neptune, itself, took over the responsibility for all airframe maintenance, as well as 90 percent of the parts and labor support for the engines, which also had no OEM support.  Each P2V was powered by twin Curtiss-Wright R3350 radial engines, and two Westinghouse J34 jet powerplants.

At the same time, in the wake of a series of high profile fatal air tanker accidents, the US Forest Service (USFS) indicated that it would no longer put aging military and commercial, legacy aircraft—typically operated by the airtanker industry—under contract after 2018.  Effectively, it was telling the industry it wanted a next-generation large air tanker.

With no purpose-built air tankers capable of carrying a minimum of 3,000 gallons of retardant in existence, Neptune turned its attention to the commercial airframe pre-owned market.  According to Greg Jones, Neptune’s Vice President, Project Development, while both the BAe 146 and the Boeing 737 were considered leading candidates, the BAe 146—powered by four Honeywell ALF 502 jet engines—was eventually selected.

“The next-generation tanker, by government specification, had to carry 3,000 gallons of fire retardant, and have manufacturer support for use in the aerial firefighting environment,” he explained.  “The size of the aircraft had to fit current USFS air tanker base infrastructure, have a robust design, and meet all USFS next generation tanker requirements.  What it came down to was supportability, maintainability, and available airframes at a reasonable acquisition cost.” 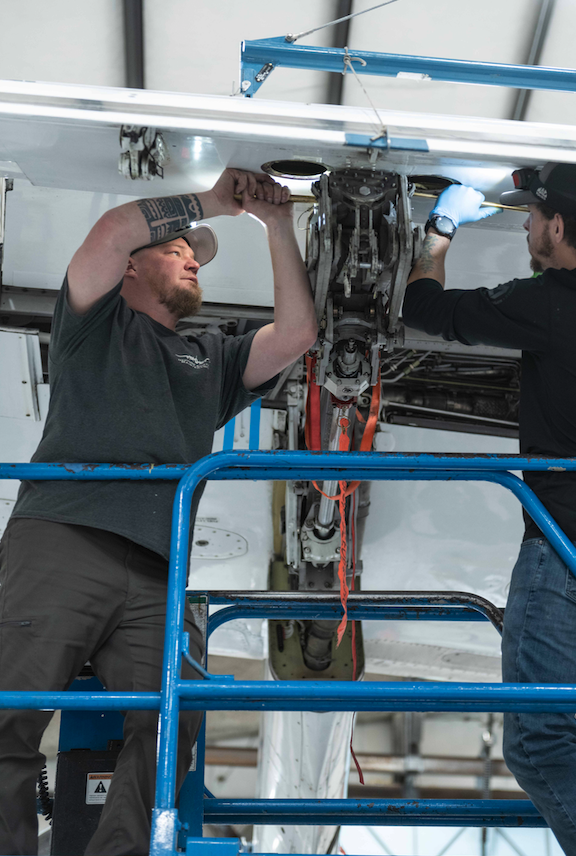 Jones pointed out that Tronosjet Maintenance of Prince Edward Island, Canada, developed an internal tank and held a supplemental type certificate (STC) for what he called “the basic first generation” of the BAe 146 internal tank drop system.

“We quickly learned the 1st generation Tronos tank needed improvements to meet IAB (Interagency Airtanker Board) requirements,” Jones pointed out.  “Neptune took over the program, purchasing the original STC from Tronos, and made the necessary changes to improve tank performance to the level it is today—a 3rd generation system, with full IAB approval.”  The 3rd generation drop system was successfully fielded in 2013.  Neptune, added Jones, has a continuing relationship with Tronos, but mostly on an as-needed basis.

“We implemented technologies that have never before been utilized in the airtanker industry, particularly in the tank and gating system, and monitoring of the aircraft,” Jones noted.

Asked if the tankers have met the operator’s expectations, Jones is emphatic.  “We’ve had these aircraft for 12 years and they have performed as expected.  There have been no surprises, the BAe 146 airframe is robust, the pilots like its simplicity, and it flies and maneuvers well in the firefighting environment,” he said.

Clifford Lynn, Neptune’s Director of Maintenance, cites the company’s highly structured winter maintenance program as an important contributor to the reliability of the next-generation air tanker.  According to Lynn, Neptune’s maintenance team designed the FAA-approved airframe inspection program (AIP), which builds upon BAE Systems’ OEM maintenance protocol for the aircraft as a commercial jet. 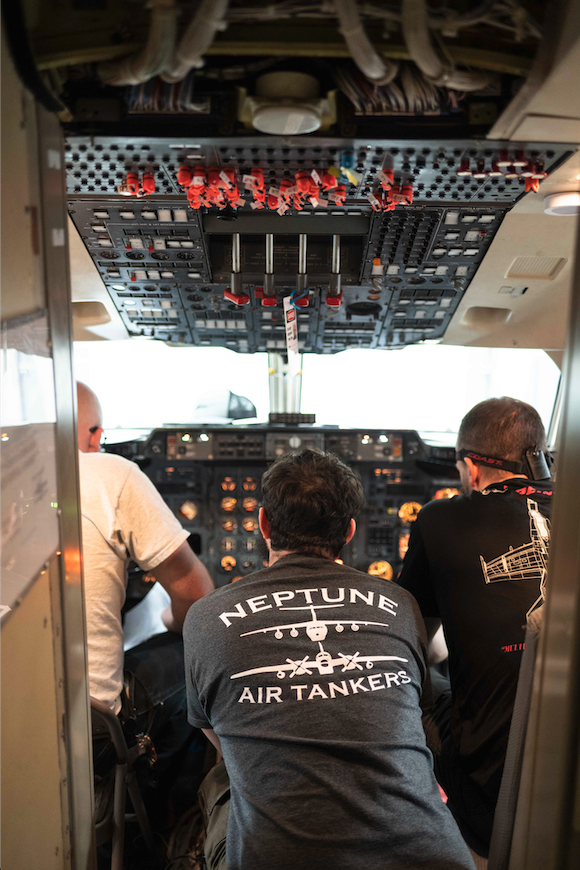 Neptune had procured a fleet of well-maintained airliners with a fleet-wide average of 34,355 cycles, on acquisition. (A cycle encompasses one take-off and landing).  As Lynn stressed, this was not out of line for an airliner which had been in service since the 1980s and 90s.

As he described it, every year, each aircraft gets an A Check, a C phase check, and a D phase check.  Every two years the C check is completed and every four years the D check is completed.  These C and D phase checks include a corrosion control and structural inspection program.  The airframe, retardant tanks, and the engines are what the winter maintenance primarily targets.

“We schedule our winter maintenance, so anything due in the next 12 months, 400 hours, and/or 600 cycles is complied with during the heavy (C and D) check,” said Lynn.  “To date, the nine air tankers are averaging 300 cycles per year.  Some line replaceable units (LRU) are not changed during the checks if they have significant time on them remaining.”

Lynn added that for most life-limited components such as the landing gear, oxygen, and fire bottles, Neptune follows the OEM maintenance protocol.

Because of the stressful environment in which the aircraft fly, some components have to be inspected at more frequent intervals, he noted.  “Also, we have some additional tank-related inspections.”

In that regard, Neptune has equipped one aircraft with Curtiss-Wright strain gauges, under USFS contractual requirements.  The strain gauges generate data, which Neptune can use to make sure its calculations for fatigue are correct.  All aircraft also have a monitoring system that alerts the company’s maintenance control staff about what Lynn termed “over-G-events,” which are rare.

Winter maintenance on Neptune’s BAe 146 airframes is carried out exclusively in-house, the only exception being an occasional component X-ray for corrosion control.  Similarly, all inspections and maintenance on the ALF 502 powerplants are done by Neptune’s technicians, with the exception of a few specialized subcomponent inspections and tests, which are outsourced. Neptune owns six hangars, plus three additional support buildings at Missoula, with total hangar space encompassing 140,000 square feet.  Of that, the 33,000 square foot main hangar is dedicated to tanker maintenance.  Lynn reported that his team has the capability to run three maintenance lines simultaneously, but Neptune usually runs only two at a time.

Lynn cites the dedication, skill, and drive of its maintenance staff as the primary reason behind the success of these one-time regional airliners as repurposed air tankers.  “It is the Neptune team that drives that success,” he said.

“We look for airframe and powerplant (A&P) certified mechanics with the heavy airframe, as well as avionics experience; however we do not shy away from uncertificated or entry-level mechanics with the right attitude,” said Lynn.  “Experience on the BAe 146 and the Honeywell ALF 502 engine is nice to have, but not a must-have.” 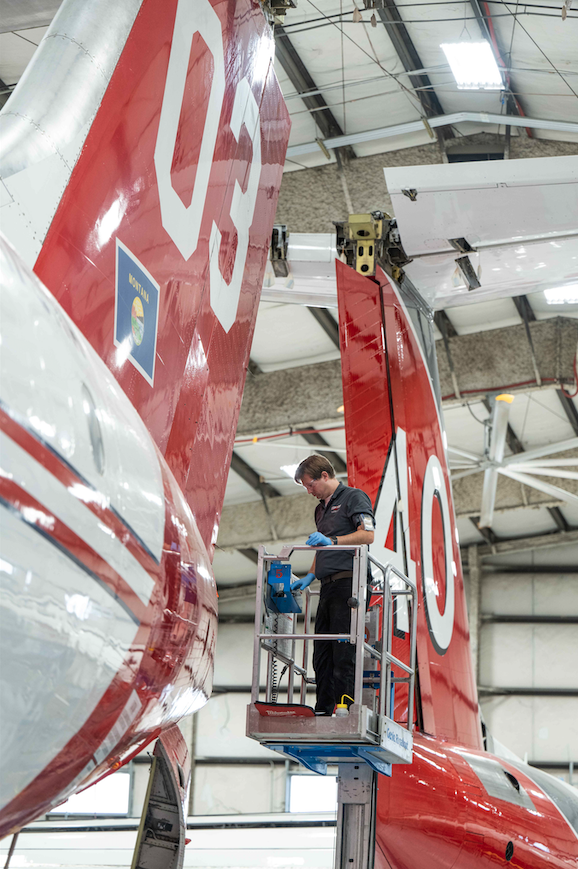 He added that about 60 percent of the current maintenance cadre worked for Neptune when it still flew the P2Vs.  All of them transitioned to the successor airplane through completion of a BAe 146 familiarization course, which Neptune runs itself.  Specifically, that includes multiple online BAe 146 system-specific courses as well as a 40-hour in-person class. New employees, said Lynn, are assigned to a shop lead.  “The shop leads are the coach mentors of their team for professional development,” he pointed out.

The familiarity of Neptune’s maintenance team with the BAe 146 extends from depot-level inspections and repairs to field-level service, utilizing Neptune-owned business aircraft to fly parts and mechanics to the air tanker’s location if the aircrafts dedicated support van does not have the specific part needed.  Usually, a field repair—and aircraft return to service—can be accomplished within hours, or a day at most. As with many businesses today, Neptune has been impacted by the COVID-19 pandemic.  Fortunately, as Lynn explained, the initial COVID restrictions came to Montana towards the tail end of the winter maintenance period in 2020-21.

“Those positions that could work from home–such as those focused on records, and the Maintenance Control Center (MCC), as examples–were allowed to work remotely,” said Lynn.  “Overtime in the shop was voluntary.  As sick days increased from the usual 10 percent to as much as 30-40 percent at times, everyone pitched in where and when they could as far as supporting different shops people were not assigned to.  Vendor supply shortages have been mitigated by Neptune’s extensive inventory of parts & equipment.”

Nicholas (Nic) Lynn, Neptune Aviation’s Vice-President, Operations (and Clifford Lynn’s brother), cites BAE Systems customer support as a contributor to Neptune’s successful BAe 146 operation. “BAE Systems has been a great partner,” said Lynn.  “Their level of support is outstanding, especially given the size of the remaining operational fleet.  They have maintained a group dedicated to supporting the BAe 146 fleet worldwide.  As the global fleet diminishes (currently about 90), that group has gotten smaller, but the level of support from our view has remained top-notch.”

As Lynn explained, as with many BAe-146 operators, the OEM provides Neptune with technical, engineering, and spare support.  “There was definitely a learning period for both sides early on, but now we are a little over 10 years into it, and things run very smoothly,” he noted.

Currently, according to Lynn, approximately 35-40 percent of replacement parts come from BAE Systems, while the rest are sourced by Neptune from various other vendors through its internal spares and logistics departments.  “BAe primarily provides us with engineering support for the airframe and systems as things pop up,” he pointed out.

Neptune’s Vice-President, Project Development Jones, reported that for now, the company plans to keep its BAe 146 fleet at its current level.  “But, you can never really predict what will happen the next year regarding the need for more resources, since aerial firefighting has become more of a worldwide operation,” he said.

Comments
Previous articleConair’s Q-400AT- The Right Place at the Right Time
Next articleProposed Changes to USDA Contracts, are you ATU Ready?

Looking to ease summer demand, the Spokane County Sheriff’s Office is taking on firefighting with a new piece of equipment