Ventura County, situated north of the Los Angeles Basin, is known for its varied terrain, farming, and beaches. The county is home to over 846,000 residents, and its 2,200 square miles are overseen by one of the more unique aviation units in the country. The county’s aviation unit is made up of aviators and crew members that come from both the police and fire departments, providing needed skill sets to the team for their many and varied mission types that span everything from police patrol, search and rescue, and aerial firefighting operations throughout the county. 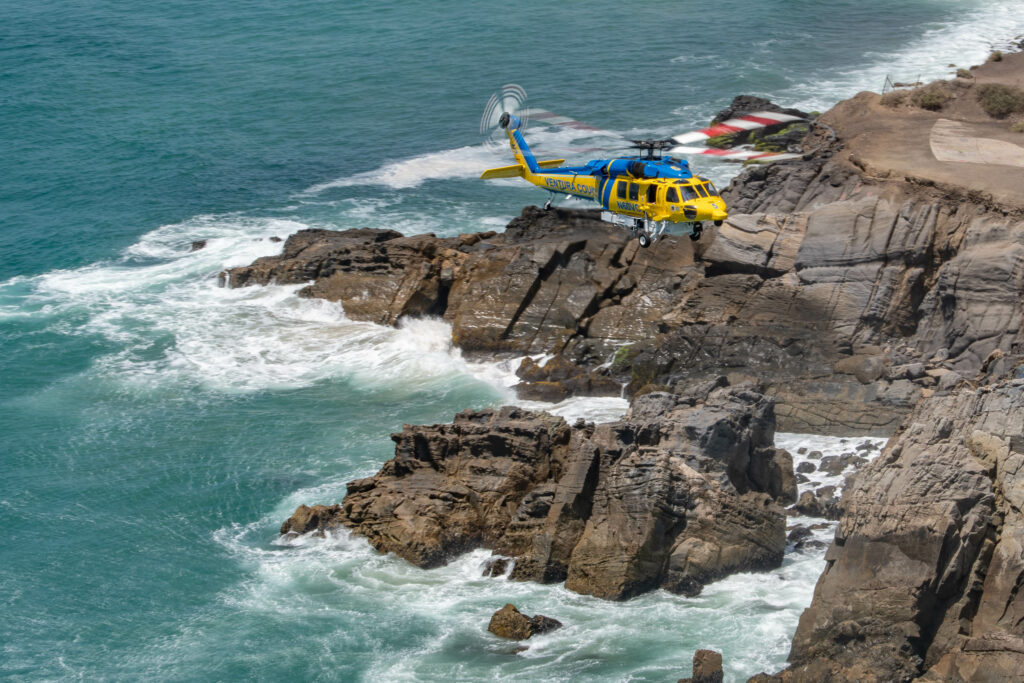 The county aviation unit was founded in 1971 with a single Bell 47 aircraft, progressing to the Bell 205 in 1973, eventually securing three of the aircraft through the 1033 military surplus program. Until 1994, when the unit picked up a UH-1H, progressing through the years to now have nine airframes, including a Bell 206L acquired in 2010, a Bell 212, and three Blackhawks, which began arriving in July of 2017.

Unlike similar programs that began acquiring the Sikorsky S-70i and outfitting it as a Firehawk, Ventura County took a unique approach to upgrading its firefighting and rescue capabilities by securing three HH-60L model aircraft from the Army National Guard, which used these aircraft in combat search and rescue configuration. The HH-60L models secured by Ventura were three of only ten available at the time, unlike the much more common UH-60A models, which are becoming extremely popular acquisitions by contract firefighting companies.

Unlike their Alpha-model brothers, Ventura was fortunate to secure Lima models that had only logged between 1400-1600 hours of flight time on each aircraft. Significantly increasing the overall lifespan of the aircraft with the agency when compared to the much higher timed Alpha models that are now being released into the market. The Lima models, of which only 28 were produced, have larger engines than the Alpha model, along with an upgraded gearbox. Although not as complex electronically as the Army Mike model, the Lima does have some digital switchology in the cockpit, with several MFD’s, although it still has a mix of analog cockpit information systems.

Thanks to some significant groundwork put in by the aviation unit and the county management on the Sheriff and fire department sides, along with county supervisors. The county purchased and picked up two helicopters through the federal government BEST program within ten days of agreeing to buy the aircraft—the third helicopter arriving a year later in 2018.

Once the HH-60L helicopters were on site, the more significant task of outfitting the aircraft began. While type training started on the aircraft for the pilots, the first aircraft to be transitioned into a fully-fledged rescue and firefighting helicopter was flown to United Rotorcraft in Colorado, where completion services included adding a Kawak tank extended landing gear to accommodate took place.

“Our goal was never to run buckets operationally. We purchased three Blackhawks with the idea we’re going to tank each one, but as budgets allowed, build time turned into three years, so out of necessity, we put a bucket on an aircraft until we received the first tanked aircraft,” said pilot Alex Kelly.

During the selection process that led to the purchase of the Blackhawks, Aviation Unit Manager Mel Lovo detailed that they did look at the value for money of other aircraft, including the Bell 412, the AW139, and the stock S-70i Firehawk. Still, when it came down to budgets, they had to get creative, which led to the acquisition of a non-standard aircraft type that is now outfitted with equipment on par with the much more costly S-70i while still staying within their annual budget spends.

Because the HH-60L was not a standard S-70i airframe, this led to some design challenges, said unit member Jim Dalton. “There were many things on this build that had to be custom created by United Rotorcraft; they removed 527 pounds of existing wiring throughout the stripping process of the aircraft before the complete refit took place. Custom equipment fitted for the Ventura 60s included dual Garmin GTN 750s, 500 TXI displays, and multiple changes made to the cockpit configuration that benefit single-pilot operation versus the dual pilot configuration that the UH-60 previously operated as in its military configuration. 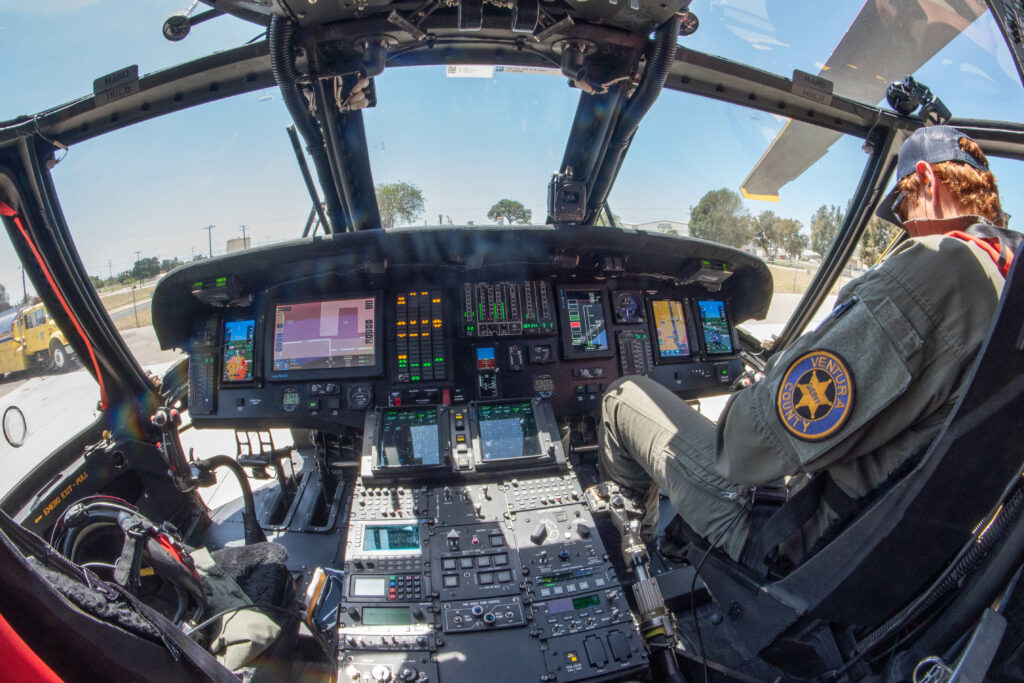 Moving from the much smaller airframes of the UH-1H and Bell 214, pilots needed to be trained to fly the new airframe as the aircraft was being fitted out, and maintenance checks took place in Alabama. The training of pilots was conducted by the former chief test pilot for Sikorsky, Kevin Bredenbeck, who now does a great deal of work on the United Rotorcraft led S-70i program that includes pilot training and aircraft check flights before acceptance as one of the most knowledgeable people in the industry on the Sikorsky airframe.

As a unit with multiple airframes, the newly revamped HH-60L’s are the future of the unit’s progression, although each aircraft still play a part in the day-to-day operation of the unit. The county’s two Bell 205’s are nearly 50 years old with 30,000 flight hours, along with the other aircraft, including the Bell 206L, which was refurbished just a few years ago, will see the unit through the next 20 years.

Even as the unit grows its aircraft fleet with the addition of the new hawks, it is evident that both halves of the joint unit have longevity and budgetary concerns at the forefront to ensure the long-term survival of the unit. “Maybe 50% of our rescues may be one person lost in the woods, we would not necessarily send the hawk out for that mission when it can be completed by an equally capable 205 with a hoist, so in that case, we would use a legacy aircraft and dispatch one of our smaller aircraft unless there was a maintenance issue preventing that,” said Lovo in regards to dispatching aircraft for missions.

Ventura County is one of six counties in California where CAL FIRE has a contract to provide aerial firefighting services, including L.A County, Orange County, Santa Barbara County, and several others that relieve CAL FIRE from the need to provide immediate resources or provide aircraft and bases to those counties to fight wildfires. Ventura and other counties receive reimbursement through the FC107 program through the US Forest Service and CAL FIRE for their participation in firefighting operations, which was explained as Ventura County acts as somewhat of a “contract” or chartered aerial firefighting operation when needed to fight large scale wildfires and work in conjunction with other aerial firefighting assets on large fires in any of the state and federal land located throughout their large response area. 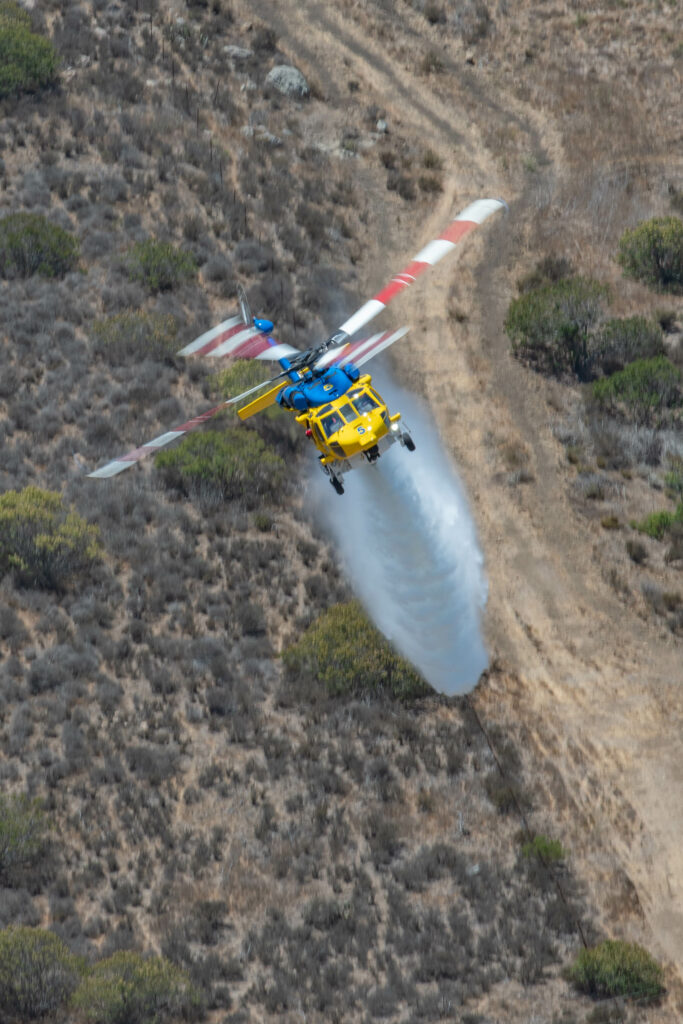 If mutual aid is requested for firefighting, Ventura aircraft will respond to surrounding counties like Santa Barbara and Orange Counties or others nearby. Still, unlike some other counties that will be deployable statewide, Ventura aircraft will stay within a reasonable distance of their home county as the department does not see a benefit to providing statewide support, nor does the county factor in state or federal reimbursement for firefighting operations into their annual operational budget.

As a large aviation unit with multiple mission profiles and aircraft, the unit flies approximately 120 hours on fires a year, with a total average of flight hours each year between the nine aircraft fly between 1000-1200 hours annually. 30% of those hours being training flights that can vary for more significant fire seasons. With the hawks only coming online recently, there is still an unknown quantity of hours the hawks will be flown on both fire operations and other missions that include flights to offshore locations within the county, such as the Channel Islands National Park and Santa Rosa island that sit 16 nautical miles off the coast of Ventura County that the county is responsible for. The unit requires a twin-engine aircraft to fly to.

Keeping a large agency air unit with multiple flying assets operational is no small task for Ventura County. To do that, the agency has spent years building up a parts inventory for its Bell products and is now in the process of doing the same for the Blackhawks that are new to the agency in the hopes that as problems arise, there will be sufficient parts to keep all aircraft operational for when they are needed. As far as the Blackhawk maintenance goes, internally, the agency can do 40-hour services on the aircraft. Still, larger maintenance tasks will be sent to outside vendors such as Arista Aviation in the past. The agency is working on a master agreement with United Rotorcraft for PMI’s and all other large maintenance tasks.

Although the agency currently operates the older Starfire FLIR system currently on both Blackhawks, they have taken delivery of two L3/Wescam LX-15 units that will be fitted as the fire season winds down. The demand for the hawks lowers, allowing the agency to fit the two new EO/IR units that will give them the ability for both day and night usage. In contrast, the older Starfire units were previously only capable of night use. The new camera units will be used across the spectrum of the unit’s missions, from search and rescue to law enforcement missions, with unit members looking forward to what the new system will provide for night firefighting missions, providing additional safety and vision to night loading of water during fire operations. 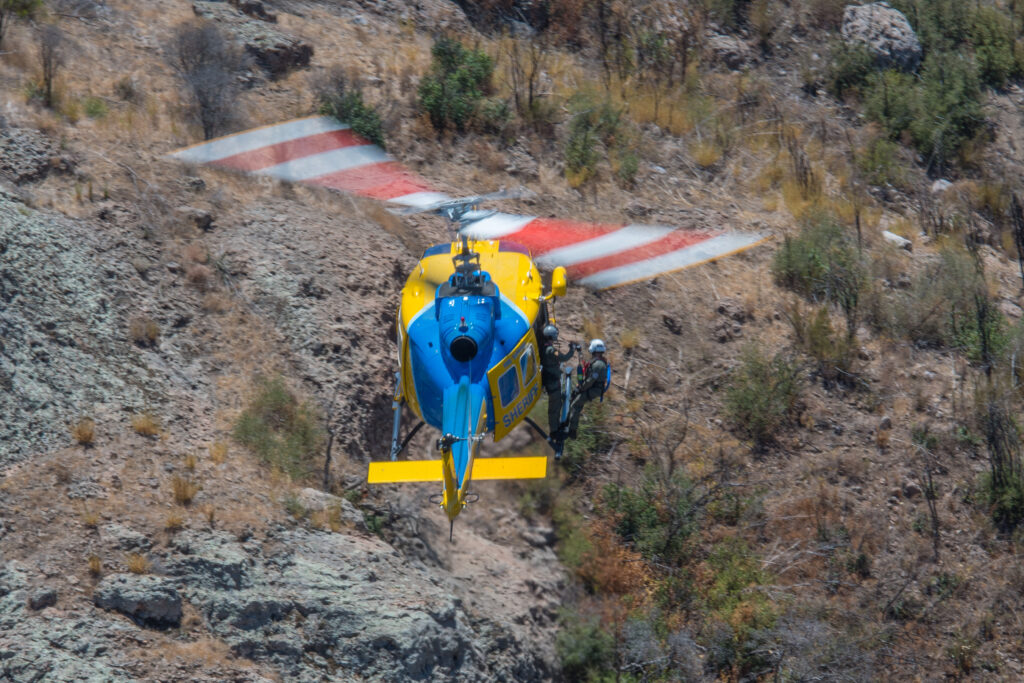 The unit employs two senior deputies and a sergeant as crew chiefs, in addition to two firefighter-paramedics and a fire captain who function in that role consisting of 22 crew members that are a mix of staff from both agencies that serve as crew for each flight as needed for daily staffing in addition to five pilots and one reserve pilot. 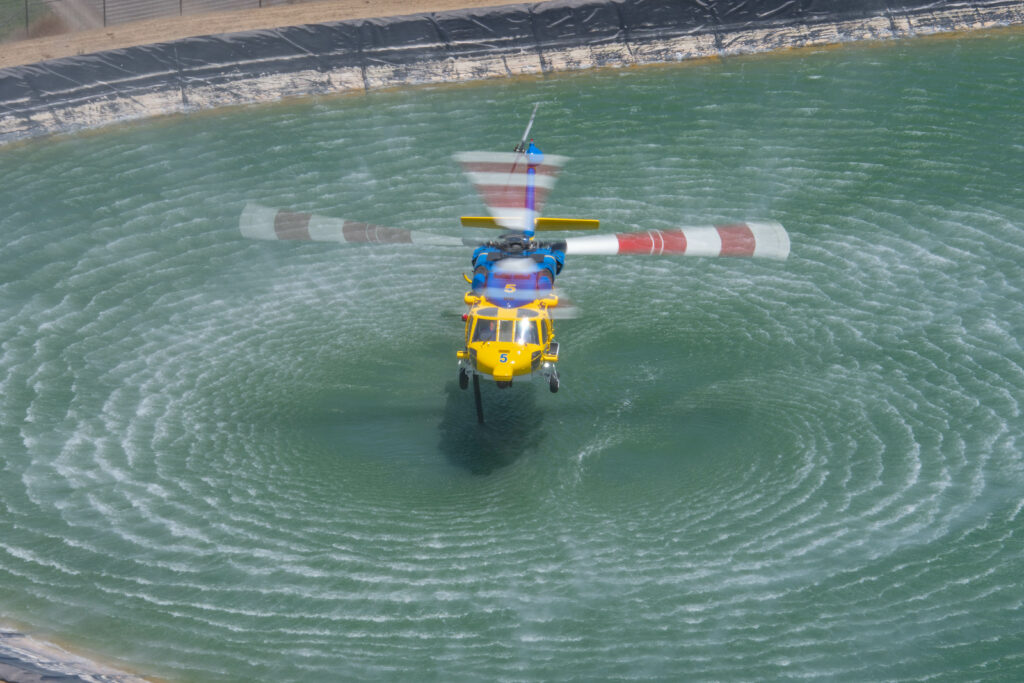 While training for pilots and full-time staff is an ongoing monthly requirement for unit staff members and is sometimes conducted daily, the unit also focuses on the training and certification of its volunteer medical staff in hoist operations, water egress (HUET), and helicopter offloading drills every month that keep all of the crew’s skills sharp and focus heavily on crew resource management to keep their operations smooth, precise and as safe as possible for both aircrew members and those in need of assistance during rescue evolutions. 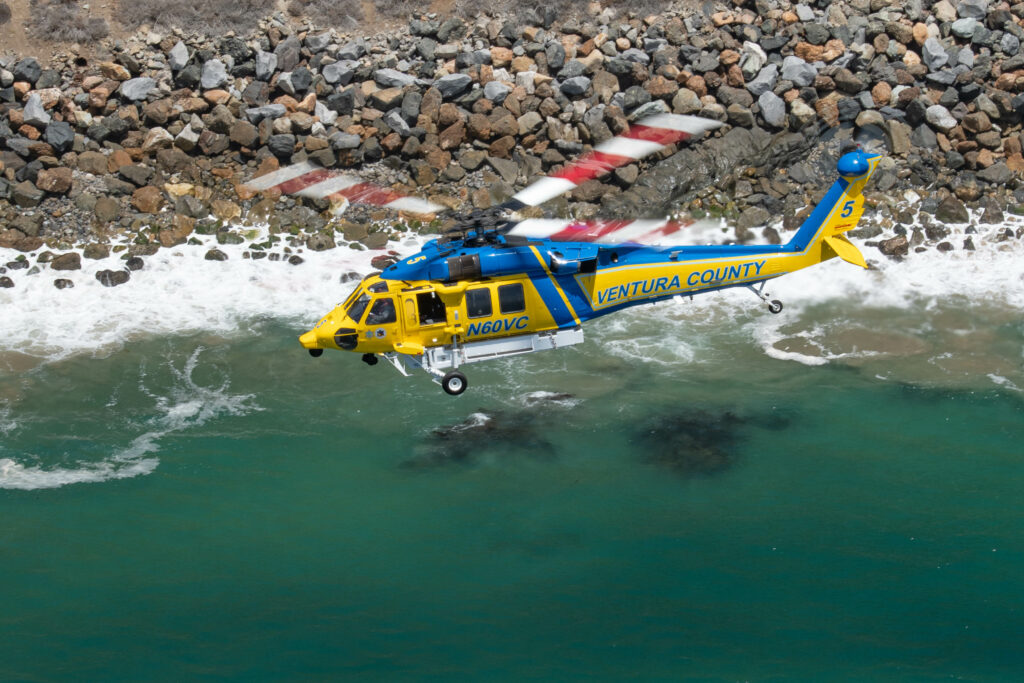 The Ventura County aviation unit is currently staffed with eight staff able to respond anywhere in the county within 25 minutes from 7 am to 7 pm for everything from a standard law enforcement flight to provide overwatch on a scene to a significant fire or rescue situation and provides on-call flight crews every day for the hours outside of their regular coverage periods. Over the nearly 50 years of operation of the unit, while aircraft may have changed, improved, and become more capable, the passion for providing a high level of support and response is evident in the drive of every member of the unit as they continue to provide a high-quality service to the citizens of Ventura County.

Comments
Previous articleA Texas “Hump” Pilot Builds an Aviation Legacy
Next articleCNC Technologies Highlights Capabilities of CNC.LIVE in Support of Super Bowl LVI and Customers Across the US