When Neptune Aviation Services planned to replace its legacy fleet of piston-driven Lockheed P2V Neptunes with BAe 146 regional jets, reconfigured as air tankers, the Missoula, Montana-based aerial firefighting company had to develop its own pilot training for an aircraft that was initially designed for passenger transport, and not low-level retardant dropping.

With nine BAe 146 tankers currently in the fleet, and the last of its 11 former US Navy, Cold War Era P2Vs retired in 2017, Neptune’s pilot training is carried out primarily at its Missoula operating base. The exception is simulator time, of which only two locations for the BAe 146 remain, and both are off-shore. According to Chief Pilot Ryan Baer, Neptune has 35 pilots on its team but likes to train enough pilots yearly to maintain a cadre of 40. He pointed out that recruiting pilots, as well as maintainers, is Neptune’s biggest challenge.

“The global pilot—and maintainer—shortage won’t disappear anytime soon,” he stressed. “Consequently, we are drawing from a very small pilot pool for training as an industry.”

While these factors make pilot recruiting that much harder, Baer stressed that the company has maintained a vigorous training regime and an extensive screening process in which most applicants fail to make the cut.

Each year, Neptune receives approximately 50 resumes from pilot applicants, mainly due to word of mouth through the operator’s current pilot group. “Referrals are essential to Neptune. Our pilots are a great resource for finding new hires, as is the aerial firefighting industry itself,” said Baer. “For example, a lead plane pilot might know of someone who would make a good tanker pilot and suggest that he or she speak to Neptune.”

The prerequisites for consideration by Neptune are 2,000 hours of total time, of which 1,000 hours must be pilot in command and multi-engine time. A second-class FAA medical certificate is also required. Neptune, Baer reported, also looks at firefighting experience, mountain flying knowledge, and flight experience diversity. “Aerial firefighting experience makes a difference, but that is not mandatory,” he explained. “We have hired pilots from various backgrounds, including military, commercial, freight, and charter—to name a few. However, I think the fit (into our company and the mission) is more important than a specific kind of flight experience.”

The Chief Pilot and the Flight Administrator will peruse the resumes and choose the initial candidates. Those selected for further interest are then referred to a group of current Neptune air tanker pilots, who will contact the applicants for an initial interview by phone. On average, maybe 16 are contacted for the phone interview. 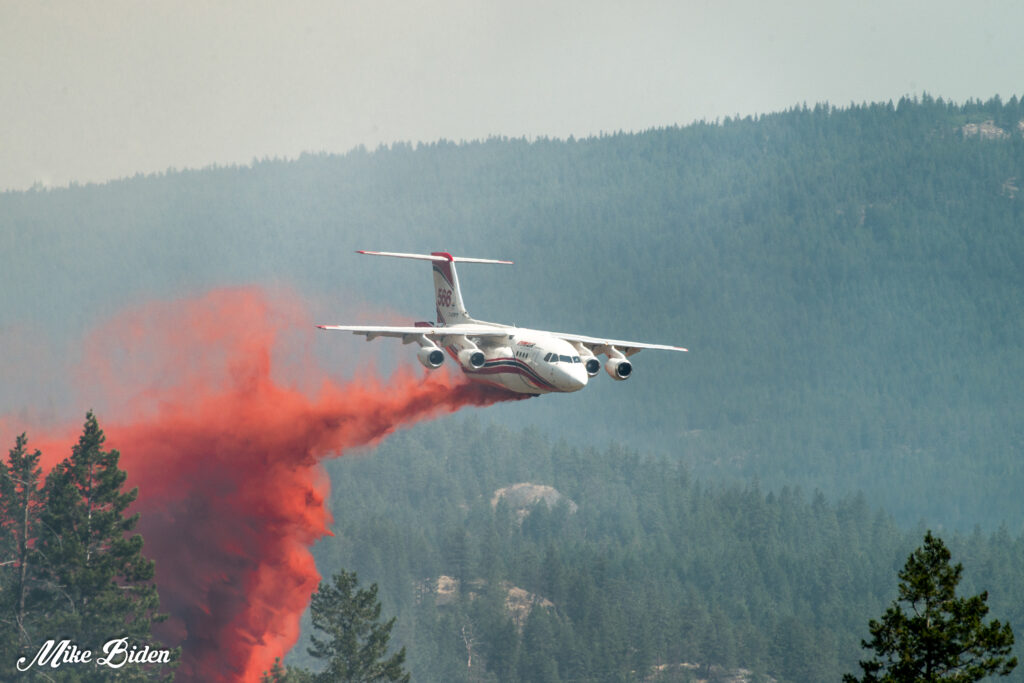 “During the phone interview, which several Initial Attack Captains conduct, the potential new hire is learning as much about Neptune as we are learning about the candidate,” Baer noted. “We stress that piloting a larger air tanker is a unique experience, and the job isn’t right for everyone – not just in terms of skill or the mission, but the lifestyle. You never know where you will go or end up on any day. That is why the phone interview is an important learning experience for everyone. It helps us determine if the candidate will be a good fit with the rest of the pilot group.”

Baer pointed out that phone conversation plays a considerable role in determining if the candidate will be invited to a formal in-person interview. “We don’t invite someone to a face-to-face meeting without our being very interested in learning more about them. Before inviting them for a face-to-face interview, we already know about a pilot’s flight experience, hours, and job history.”  He added that of the roughly ten candidates contacted for the phone interview, about six make it to the onsite interview, which is carried out over a few days with Neptune’s Chief Pilot, Flight Administrator, and a current pilot. “All three interviewers play an important role in the selection process,” Baer said.

When the pilot candidate arrives for the in-person interview, they will have a working knowledge of Neptune’s history, flight procedures, and aerial firefighting. “The interviews help us learn about their skills and how they would fit with the Neptune team,” Baer explained. “The in-person interview process is critical to hiring new pilots at Neptune.”

Another component of the screening process is a simulator-based evaluation of the pilot’s instrument abilities, decision-making, and stick and rudder skills. The evaluation, which uses a Citation, takes place at SimCheck International near Sacramento, California.

Baer reported that roughly 70 percent of those who make it to the formal interview process are selected for training and put on the payroll. While the number varies by staffing needs, roughly four candidates are selected for initial training by the end of the screening process.

As Baer explained, BAE Systems provided support for the pilot training program with the flight manuals and much of the basic operational flight information, which was readily available. Neptune then needed to translate that information to apply to aerial firefighting, including the unique nature of operations in a fire traffic area (FTA).

“Every one of our air tanker pilots has been trained to operate in the FTA and knows what altitudes and directions to orbit,” said Baer. “It is essential for a pilot to have multi-tasking skills since operating within the FTA means dropping retardant at an altitude of 150 feet above the ground—often in mountainous terrain—under conditions that combine poor visibility from heavy smoke and bad turbulence.”

He stated that those conditions are considered normal within the FTA and are a dynamic and challenging part of the job. “At the same time, flight crews might be communicating on as many as three radios while maintaining separation from other aircraft operating in the FTA,” he noted.

In that regard, said Baer, pilots are also trained to coordinate with an air attack aircraft, which functions as an air traffic control platform when more than four aircraft are operating within an FTA. Specifically, its task is to assure separation and traffic flows of aircraft and interface with ground-based firefighting personnel to decide on the tactical means of fighting the fire.

Pilot training at Neptune begins with 80 hours of classroom instruction at Missoula. Baer pointed out that the program is structured to include more in-depth systems training than is typical at some commercial airlines. “Training commences with 10-day sessions—every eight hours per day–focusing on every major aircraft system and an introduction to FTA operations, he explained. “Interim exams, as well as a final one, are all system focused.”  He added that throughout the entire calendar year, pilots take online, company-assigned training, concluding with an exam.

According to Baer, the ground school pass rate is almost 100 percent, thanks to small class sizes, affording near-individual instruction.

Upon completion of ground school, new-hire pilots transition to simulator training at CAE’s London-Gatwick facility or at Ansett Aviation’s Melbourne, Australia, which has the only remaining full-motion simulators for the BAe 146, due to the ongoing retirement and shrinking number of the global commercial fleet.

Neptune worked retardant training modules into the simulator training process. “That includes everything from simulating a drop on a grass fire in flat terrain to a more complex drop-in mountainous terrain. We try to cover everything a pilot could encounter during a busy fire season. At the same time, the training encompasses precision and non-precision approaches, along with specific systems-related failures meant to reinforce the training received in the classroom.”

Every simulator training day concludes with a simulator check ride, and the pilots are graded on how they performed that day. “The evaluation is a Type Ride or 61.58. We try to cover actual conditions that Neptune, other BAe pilots, or other aerial firefighting aircraft have encountered in the real world,” said Baer.

The simulator companies, Baer added, provided the visuals to the extent possible. However, he pointed out that there is some limitation to the capability of the visual system can reproduce the conditions of a firefighting environment.

With the onset of the COVID-19 pandemic and resulting travel restrictions, both simulators were out of reach for a year, reported Baer. However, the use of a Boeing 737 simulator at the Pan Am International Flight Academy in Miami was made available and proved to be an adequate workaround. “We used that simulator for training that was not aircraft specific, such as crew resource management, wind shear, and instrument proficiency, which we also include in the BAe simulators,” he said.

Now that travel restrictions to the United Kingdom have eased, Neptune has once more begun to use the CAE simulator. While CAE and Ansett instructor pilots initially provided the simulator portion of training, Neptune now uses its training cadre of initial attack pilots and at least one BAe 146 instructor pilot on contract at CAE.

”We train to proficiency,” said Baer, who added that  Neptune’s pilots essentially complete a type-rating course. “But since the simulators are outside the US and not FAA certified, a BAe 146 type rating will be earned once the pilot goes through training on the BAe 146 in the US,” he said.

The airplane phase of the training takes about two to four hours before a check ride under a check airman’s supervision. The final training component is initial operating experience during real-world fire-retardant dropping missions. Here the pilot begins by observing, then occupies the first officer’s seat while being supervised by a senior first officer and captain—completing Neptune’s proficiency requirements. Baer added that Neptune conducts line standard checks on as many crews as possible throughout the fire season to ensure compliance with company standards and facilitate learning.

Over the past two years, Neptune, like other aerial firefighting businesses, has confronted the twin challenges of especially bad fire seasons, overlaid with a global pandemic. Neither, explained Baer, required Neptune to make substantial changes to its pilot training.

“The pandemic posed logistical challenges, but it didn’t change the scope of our training,” he stressed. “The increased severity of the fire seasons is a reminder that safety and training are of paramount importance in the aerial firefighting industry—and Neptune keeps safety at the core of its training and operations. Neptune is committed to adhering to the most stringent safety and training procedures in the aerial firefighting industry.”

Also, Baer confirmed that Neptune is seeking growth in the global firefighting market, given the opportunity to utilize the longer-range ferrying capabilities of its BAe 146 fleet. “Our training will reflect the unique requirements of the countries where we could be operating and their approach to aerial firefighting,” he said.

For Neptune, according to Baer, every year of operations is a learning experience in which the collective knowledge is incorporated into pilot training.

“Our pilots—as a whole—have more than 35,000 hours of flight time on fires alone. We have built that collective experience into our training manual. And every year, we learn new things and share that experience with the pilots on our team,” Baer explained. “I also believe that Neptune’s hiring process has improved, as we are hiring better pilots who know the unique demands of aerial firefighting.