The sound of aircraft engines echoing over the vast forests and lakes of northern Saskatchewan dates back to 1924 when the Royal Canadian Air Force flew the first aerial photography flights in the region. This produced detailed area maps critical for air navigation, and soon aircraft were being used in forest fire suppression, with the province developing a highly efficient air attack system in the 50s and 60s operating from a chain of bases located at Prince Albert, La Ronge, Meadow Lake, Hudson Bay, and Buffalo Narrows. First were fire patrols and water bombing with Beavers and Otters, and eventually, Grumman Trackers, Cansos, and CL-215 water bombers formed the backbone of the fleet.

As the newly appointed Chief Pilot for the Flight Operations Unit of the Saskatchewan Public Safety Agency (SPSA), Fred Jorgensen grew up in the north, where aircraft was a principal means of transportation and commerce. From an early age, Fred’s interest was drawn to the skies. 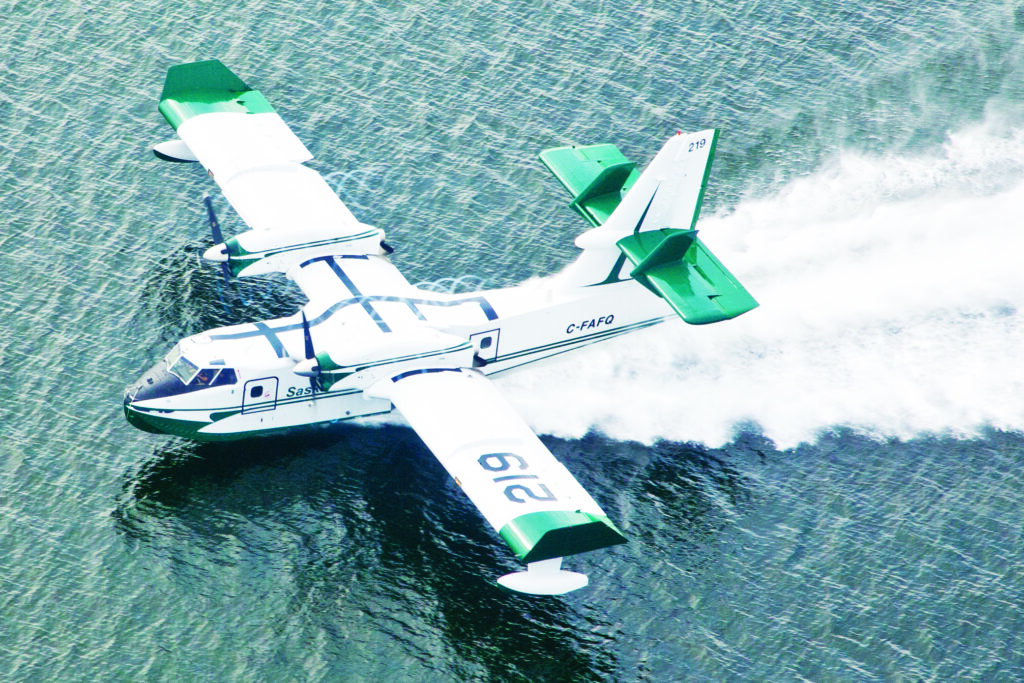 “Ever since I was a little kid, I remember coming to the La Ronge airshow with my model airplanes and pretending to fly through the air with the airshow participants. I always had a fascination with aircraft and the ability to fly and thought that was something that not everyone had a chance to experience, so I wanted to be up there and be a part of that.”

Even though today, where many of the province’s northern communities are linked by road and improved communications, aviation continues to play a critically important role in the region, not only in fire suppression but also in mining, recreation, resource management, and other commercial activities.

“Aviation is a big part of the La Ronge community where I was born and raised. Our house wasn’t far from the airport, so every summer, I’d see the floatplanes fly over, and you could hear the growl of the radial engines of Tracker and CL-215 aircraft, and you’d know that springtime was in the air, and not long after that, the aerial attack fire season was on the way.”

“I started my private license in Ottawa when attending university, taking an aerospace and engineering course. Still, halfway through my third year, I decided I’d rather be out there driving aircraft than sitting behind some desk designing them. I took a break that Christmas and moved back to Saskatchewan, and finished my Private Pilot License course in Saskatoon at Mitchinson Aviation Centre in 1997.”

An old adage says the opportunity is where luck and preparation meet. For many pilots, that also meant starting as a ‘ramp rat,’ refueling aircraft, handling baggage, and doing whatever was required outside of flying the aircraft. For Fred, it meant continuing his flying career and finishing his aerospace degree.

“In the summer of 1996, I worked the docks at Athabasca Airways, so the spring after I got my commercial license, Athabasca offered me a position on the Cessna 185. Soon after, they shipped me to Stony Rapids, where I spent two summers. For the winter months, I figured I needed that fourth year of university, so, over the next two years, I was flying in the summer on the floatplanes and then finishing my university degree in the winter. I graduated in 2000 and returned to flying in Saskatchewan, and I’ve been doing that ever since.” 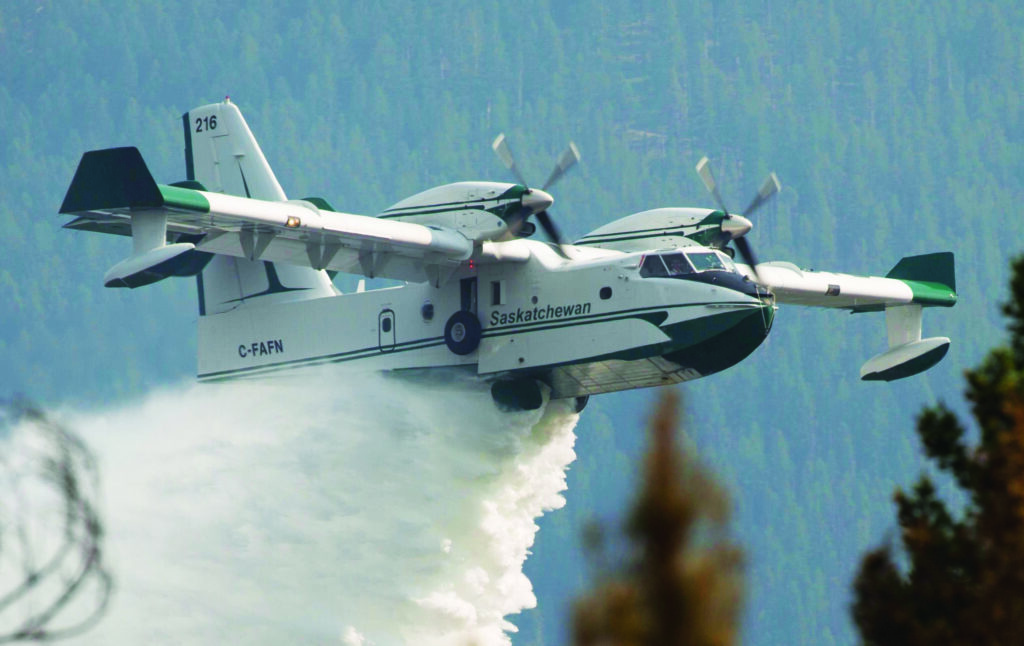 Making a move to aerial attack demands a lot from pilots. The companies and organizations providing water bombing services are very selective in choosing aircrew and ground crew. The job is appealing from the flying point of view and because they are virtually on the job for the entire season and at times in other jurisdictions.

Over the years, the job has taken me to New Mexico, Washington, Oregon, Idaho, and Alaska. I started in the CL-215 as co-pilot in 2006, held that position for four years, and then on to the Turbo Commander as Birddog. Since then, I’ve flown as Captain on the Commander, the 215, and the Convair. I enjoy flying all of them, but I would say the Turbo Commander is my favorite because of its high speed; and you get to fly at treetop level doing the Birddog work, but you still get to fly at a high level and get some IFR flight time.

The move to Chief Pilot has also brought changes in his overall role. I’ve been acting Chief Pilot for the last year and a half, and as of April 1 of this year, the assignment became official. I won’t be flying as much, but I must keep current on the Birddog and the two tankers so I can fill in for guys on their days off or as needed. But I also realize there will be increased managerial or administrative duties.

An essential part of the new assignment involves managing aircrew and ground crew, ensuring they are in the right place at the right time, and scheduling work periods with as few conflicts as possible. The uncertain nature of the timing and location of fires can often mean a plan one day becomes a different plan the next.

The crews come back in late March to late April, where we stagger the groups just a little, so we have more coverage and flexibility throughout summer and have coverage in the spring and late fall.

In any industry, keeping pace with technology is always part and parcel of strategic planning. With regards to aviation, in particular, the advent of the Global Positioning System (GPS) has revolutionized the way aircraft navigate around the world.

“I started on a Cessna 185 that didn’t have GPS, and it was all Mark One eyeball map reading wherever we went. You had to get to know every lake and bay and island. Over the years, GPS has tremendously increased our situational awareness, not just locally but when we have to help out in other jurisdictions. That also means we can do the job more efficiently and economically than ever.”

GPS is also of particular importance in aerial attacks because, in a lot of areas, the aircraft need to work, there are no other navigation aids, and when you’re flying over thousands and thousands of square miles of forest country, that looks a lot the same, it becomes more and more challenging to navigate in a direct line from point A to point B.

“In our situation, you’re not just going from the airport to airport, you’re going all over the place, and whether it be our land-based aircraft operating from airstrips or our skimmers refilling in lakes, the quicker we get to a location, the better we can help combat a fire. And many of our experienced pilots can pass along exact GPS information they’ve learned over the years about specific lakes, whether they are suitable or not, if there are any dangers like sand bars, logs, or the like.”

Accurate GPS information also allows the dispatch center to send out an aircraft in response to a call from a camp or cabin owner who may be concerned over a nearby fire and to check out the location and wind direction to ascertain the degree of danger to buildings and other structures.

In all areas of aviation, safety has become more and more a central and strategic part of any operation. It makes good sense not only from a personnel and equipment point of view but also because avoiding accidents or incidents means having more resources at your disposal.

“We do everything we can to improve what we do and how we do it. We’ve greatly enhanced our Safety Management System (SMS) operations in how we communicate within the organization and with other organizations such as Transport Canada and those in other jurisdictions. The more efficient we become in our interactions, the better, where we work together to develop options to do everything safely and as best we can.”

For Fred Jorgensen, being a northerner has meant that community service is an integral part of living and working in the north, where communities need to pull together when faced with the challenges of dealing with emergencies brought on by a temperamental Mother Nature.

“I enjoy giving back to the province, of being part of emergency services. On the side, I’ve spent 20 years as a local firefighter from La Ronge, so I feel that being in the fire service as part of the provincial air attack team is just an extension. And part of the job is being ready to react quickly on a 24/7 basis when people, property, or resources are directly threatened by fire. So, we’re all there to serve and protect the public to the best of our ability.”

Comments
Previous articleDown to the Last Drop!
Next articleThe Drop – Innovation is the Key