The 2022 summer fire season opened in Macedonia in a rather unexpected way. On May 30th, 2022, the most significant fire this year erupted not in a forest but in downtown Tetovo, Macedonia. A large fire broke out Monday morning, engulfing the former Makedonija Tabak factory, producing an enormous amount of smoke covering the city and parts of the Polog Valley, located in the north-western part of Macedonia.

The initial response to the fire included a Macedonian Police Helicopter Unit first on the scene, executing the unit’s first real-world aerial firefighting operation. The Unit’s Agusta-Bell Agusta Bell 212 utility helicopter, utilizing the newly-acquired 1,000-liter/265 Gallon capacity IMS New Zealand produced Cloudburst Fire Bucket that executed 28 drops of water on the burning factory. The 212 retrieved water from a private pool in the village of Sarakjino, some 6km southeast of Tetovo. 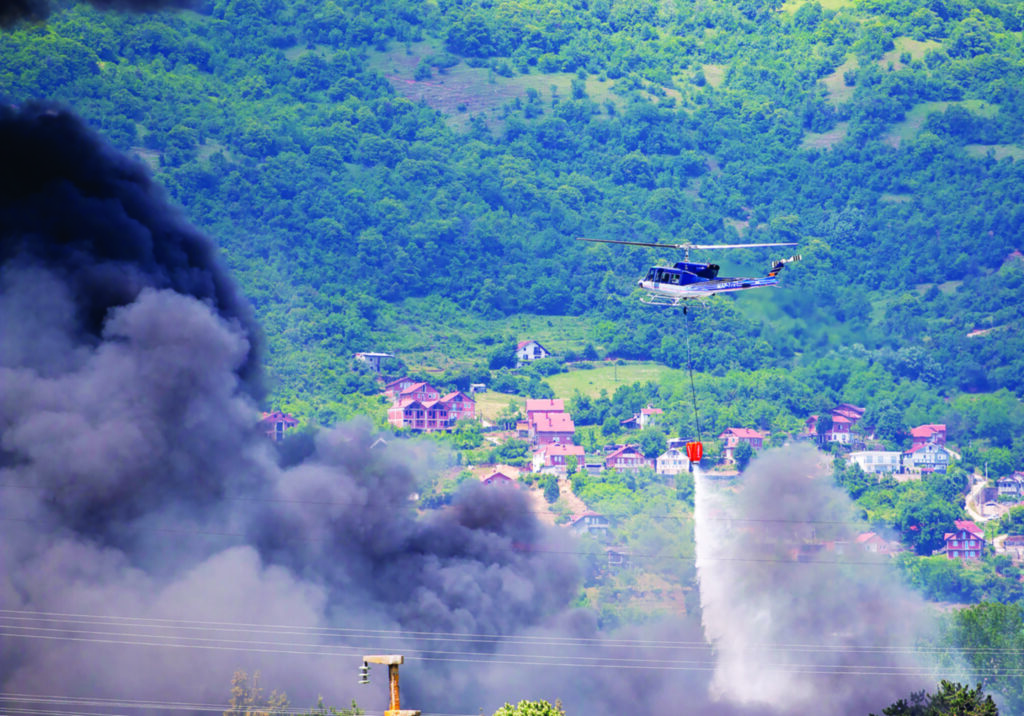 Due to the severity of the blaze, the Police 212 utilized hot refueling at the nearby Tetovo military barracks, spending as little time as possible away from the intense fire.

The Macedonian Police helicopter was also joined by a Macedonian Air Force Mi-8MT helicopter to assist, executing eight salvo’s, dropping 2,500 liters/660 US Gallons utilizing their SEI Industries Bambi Bucket multiple-drop underslung system. Unlike the police helicopter, the army helicopters collected water from the Vardar river between the villages Palatica and Siri?ino, some 9.5km east of Tetovo.

The fire was finally under control in the early afternoon thanks to the enormous effort of ground firefighting units from Tetovo, Gostivar, Kievo, and Skopje, as well as the involvement of the army and civil protection aviation units. 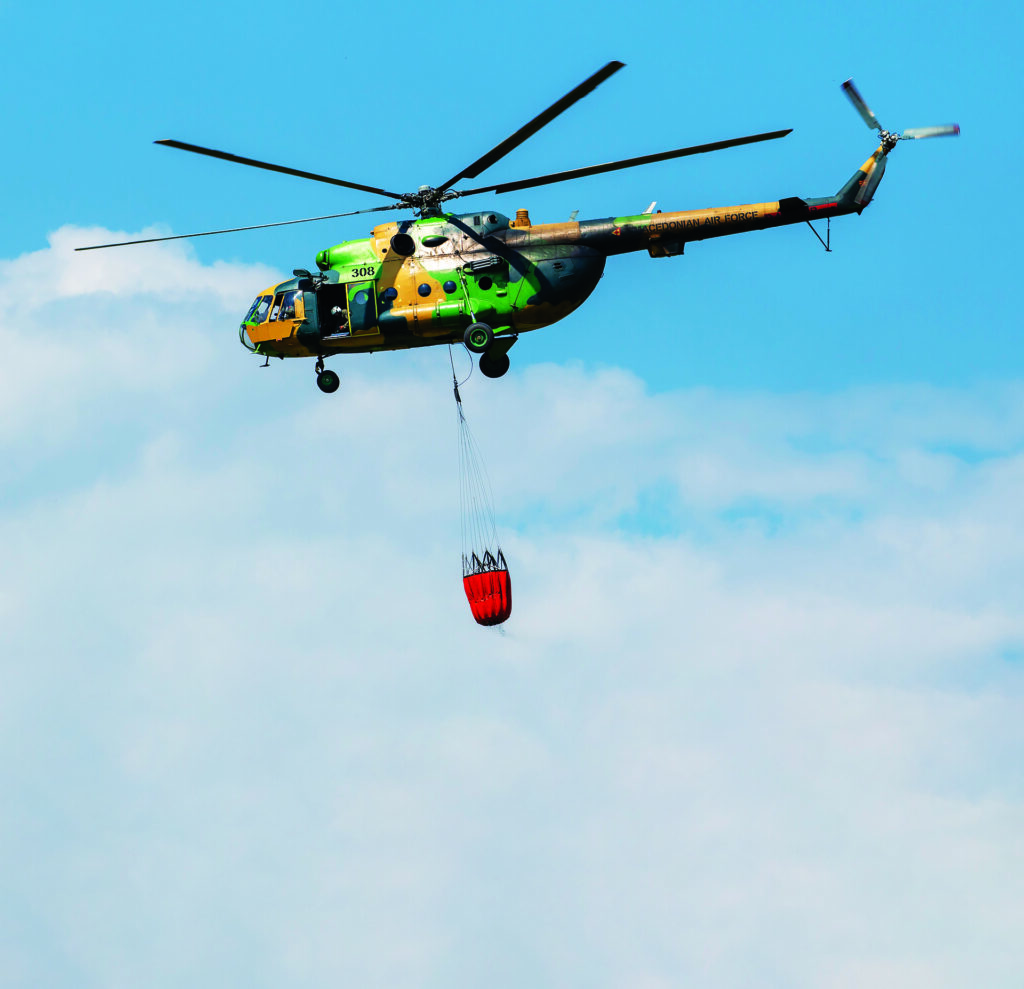 “The helicopters were used to cut the fire down and prevent it’s spreading further to the rear of the factory where there were flammable gases,” said Stojane Angelov, the Director of Macedonia’s Crisis Management Center (Centar za Upravuvanje so Krizi, CUK).

One Macedonian AT-802A Fire Boss (registered Z3-BGT) is flying in Macedonia this season and will join another two Fire Boss aircraft upon returning from service performed by Titan Aircraft.

“The third aircraft, Z3-BGU, is still in Skopje, and we are assisting the Protection and Rescue Directorate to repair and prepare that plane for departing to Spain these days. This year we faced engine oil leaking problems on all three Macedonian planes, and we suspect this is due to the aircraft being non-operational for more than a year and a half. We solved the problems on two planes, and one of them, Z3-BGT, passed maintenance in Spain, has already returned to Skopje, and is ready for the summer. The other one, Z3-BGV, is now passing maintenance in Spain, and we expect it back in Macedonia in June, while the third one is yet to come to Spain and, all going well, it should be back in Macedonia late in July at the earliest,” said Hugo Arceo, Titan’s Sales Manager. 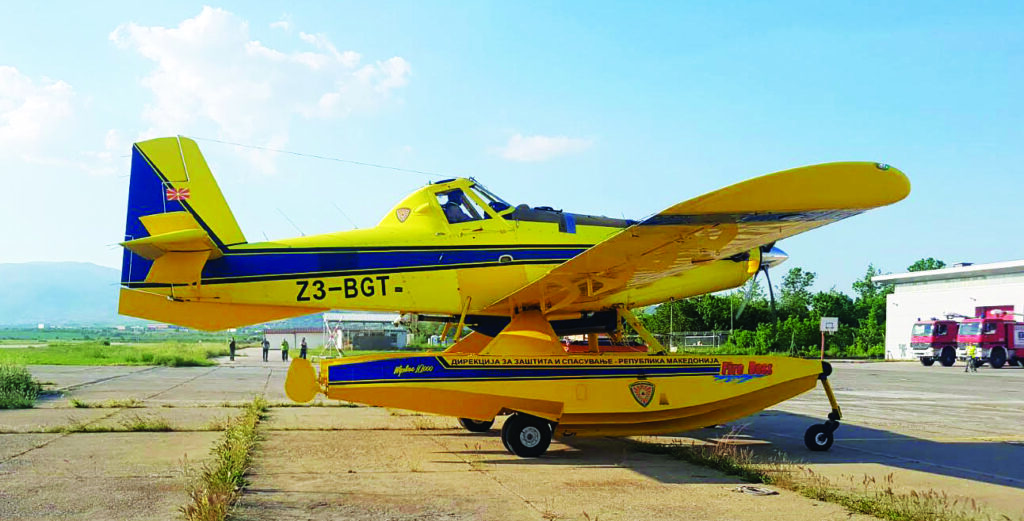 Asked if Macedonia will be better prepared this summer, Arceo said that his company is working hard to assist the government in Skopje to avoid last year’s scenario when Macedonian AT-802s were grounded. At the same time, assistance was requested and came from Serbia, Romania, and Montenegro. 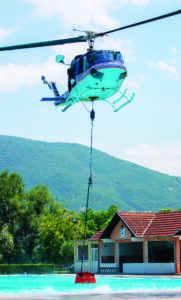 “Apart from restoring the Fire Boss aircraft, we are also working to ensure that three Air Tractor pilots will be operationally available to Macedonia this summer. It is little known that our company recently decided to donate additional training flights urgently and to organize recurrent checks for two Macedonian pilots. Both passed the necessary flight checks in Viseu, Portugal, on May 27th and have already returned to Macedonia. So, Macedonia will have three AT-802 pilots this summer. This, however, will further change for the better when before the end of the year, as per agreement with the Macedonian government, we will complete the training of an additional two Macedonian AT-802 pilots,” Arceo said.

Macedonia has had three 3,100-liters AT-802A Fire Boss fire fighting planes since 2009. Titan Aircraft Company has supported the Macedonian Fire Boss fleet’s logistics since its establishment. Macedonia should be in a better position for firefighting with the future assistance of the nation’s Police and Army aircraft, the Mi-8 & 17 helicopters, and the AB-212. This June, Macedonia’s Ministry of Internal Affairs expects to receive back from its scheduled 5-year/5,000-hours inspection a modernized Bell 412EP helicopter to bolster the national fleet of firefighting aircraft.