Even before the summer’s hottest, driest weather has arrived, wildfires have taken a heavy toll in some parts of the U.S. This spring, in collaboration with fire response teams, NASA researchers tested their prototype tools to help make the demanding job of wildland firefighters safer.

Drones are able to capture thermal images of the landscape below, which can help determine the safest, most effective approach to fighting a particular fire. Activities in the airspace above such a disaster become complex, with multiple types of aircraft performing operations. STEReO’s prototype device, called the UAS pilot’s kit (UASP-kit), notifies drone pilots where crewed aircraft are positioned, allowing them to safely stay out of the way.

The NASA team evaluated their UASP-kits in real-life settings at two field tests this spring – one with multiple stops across the southern United States, the other in Northern California 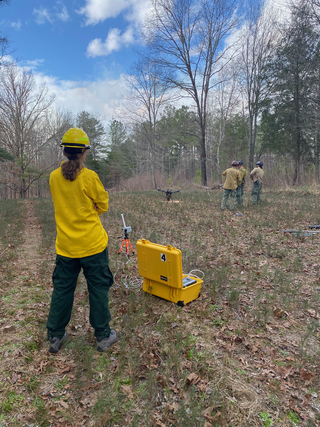 In March, STEReO team members observed U.S. Forest Service personnel working at prescribed burns in eight national forests across Georgia, Alabama, and Mississippi. These intentional fires are a land management strategy used to reduce the amount of vegetation available for unintentional fires to burn. They’re started with aerial-ignition platforms, drones that precisely drop small incendiary balls while under the control of a remote pilot. Forest Service trainees were learning the ropes.

The NASA team brought four of their UASP-kits to these events, taught Forest Service personnel how to operate them, and then observed as the firefighters used the technology during two weeks of real-world missions.

The prescribed burns provide a way to practice for fire emergencies. But they also come with their own challenges, which STEReO can help meet. Unlike wildfire disaster responses, prescribed burns don’t have the protections offered by a closed-off airspace meant to keep other aircraft out of the way. That means anyone can fly through the area. STEReO’s UASP-kit gives operators greater awareness of nearby aircraft, making it safer to conduct these helpful kinds of burns.

From this field work, NASA researchers gathered important data and feedback from fire teams’ extended use of STEReO’s concepts in a real-world setting.

“It was great to see them incorporate the UASP-kit into their workflows and hear how it affects their situational awareness,” said Joey Mercer, STEReO’s principal investigator at NASA’s Ames Research Center in California’s Silicon Valley, where the project is led. “Any time spent in the field with firefighters is super valuable – we get to see more of their world and see who we’re building this technology for.”

On the other side of the country, in early May, STEReO researchers joined a training course related to aerial firefighting hosted by the California Department of Forestry and Fire Protection (CAL FIRE). In Redding, California, trainees were learning to direct the intense airspace activity of an emergency response, with numerous aircraft flying over a simulated fire. On the ground, NASA’s STEReO team was testing new features of their UASP-kit.

While no drones were flown that day, STEReO team members played the role of the UAS pilot and tested how the UASP-kit performed with their latest software in this complex environment.

“We were able to see right away if a new feature was working well, or if it needed immediate attention from our team’s software engineers,” said Mercer. “This rapid prototyping approach, when validated in these operational settings, is the fastest way for us to be sure we’re giving these users the capabilities they need.”

As fire season progresses, the STEReO team will keep learning how to improve the UASP-kit from their partners on the front lines of wildfires. Forest Service and CAL FIRE staff will continue to operate the UASP-kits throughout this fire season, giving the STEReO team many opportunities to observe how drone operators use their technology during wildfire disaster responses.