A Burning Issue – Does the UK Need Aerial Firefighting Aircraft?

Republished with permission from the Royal Aeronautical Society

During the middle of July, at the height of the UK’s summer season, the nation experienced its highest ever temperatures recorded. While it was hot on the news for days, numerous houses became engulfed in flames due to the extreme heat, and on-ground firefighters struggled to contain them. One firefighter based in Kent said that his team was stretched so thin due to the lack of resources, they “were at breaking point” and barely had time to rehydrate.

The UK  has never seen temperatures like this before, and it is expected to get worse. Yet, the nation does not have its own aerial firefighting capabilities, and in recent years has cut its funding for firefighting services. So, what options does the UK have to be prepared for the next fire season before it’s too late? 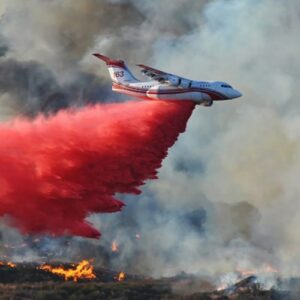 One obvious answer would be for the UK to buy its own aerial firefighting tankers. Australia recently made moves to acquire its own, and the EU is considering purchasing more ahead of the next dry season.

While the UK is silent on its next moves, one aviation veteran hopes things will change soon. Richard Thomasson, who has worked with Rolls-Royce, BAE Systems, and then the US Air Force, has launched a petition to establish sovereign aerial firefighting capabilities in the UK. He hopes the government will act now, instead of wasting time “on a pointless court of inquiry to establish why nothing was done”, Thomasson told AEROSPACE. “I think by the way things are going, if we do nothing, then we’re gonna see more homes and more countrysides destroyed”, Thomasson exclaimed.

Currently, the UK does not have the sovereign capability when it comes to aerial firefighting, which made sense in the past when wildfires were fairly uncommon. Ideally, Thomasson’s main desire is for the government to invest in at least two aircraft under sovereign control. One would be based in Northolt, London, and another in Glasgow. He believes deploying these two would easily cover the entirety of the UK, – if traveling at 400 mph cruise – dropping roughly 3,000 gallons in a single pass.

Amid drier seasons in the summer, the UK would typically contract firefighting aircraft from companies such as Canada-based Coulson or Neptune, but Thomasson says the nation shouldn’t be overly reliant on overseas contractors when “they’ve got problems of their own”. Plus, overseas contracting can sometimes take months for delivery, ultimately wasting crucial costs and time. 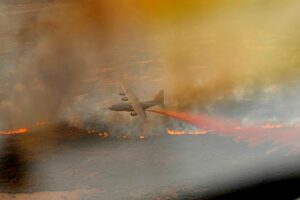 Another alternative, that might be just as pragmatic, is to modify existing aircraft to have firefighting capabilities. Thomasson is confident in this type of procedure, after being involved in converting the first BAE 146 into a firefighting aircraft in Canada in 2009. He said that the same aircraft, or similar models, could be modified to fight fires.

It isn’t a new concept and has been successful in the past. Among many others, one example is Boeing’s 747 Supertanker. After entering into service in 2009, despite its ongoing financial difficulties, the aircraft operated for about 13 years, being deployed to multiple US states, Israel and Chile to mitigate wildfires, before it retired in 2021.

However, the conversion process takes time. Thomasson explained that it obviously includes the contracting process, plus stripping the aircraft of its passenger comforts, embedding a water-filled tank into the middle of the fuselage, manufacturing a way to dispense the water, sort through a tender process, and then train relevant crew. This puts the UK in a time crunch, as the whole process could take up to a year. 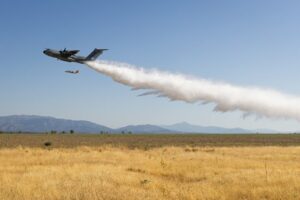 Alternatively, and potentially a cheaper option, could be a waterbomber kit – like Airbus’ A400M. During the month of July, Airbus completed a test campaign of a removable waterbombing kit retrofitted into its A400M military transporter in Spain. The test saw the aircraft fly about 150ft in the air at speeds of 125kn, then dropping about 20t from the tank within ten seconds. The tests were carried out with the Spanish Air Force and validated the turboprop’s ability to carry out the role with the kit quickly. According to Airbus, the solution is a roll-on, roll-off kit that can be input into any of the A400M fleet, without modification. Next up, the manufacturer is set to test it during nighttime conditions.

Thomasson said that like the A400, temporary solution kits could be a sufficient firefighting capability in the UK, and could work in multiple models, like the Boeing 737, Airbus A319, and the A320, or the C130. 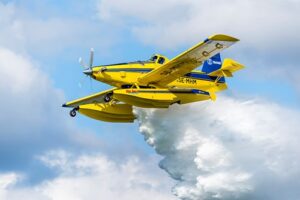 Thomasson said that sovereign capability is like having your own battleships – “they’re there when you need it”. He believes there is really no other way to fight fires efficiently if the UK doesn’t have its own aircraft. While the costs might be large in the short term – depending on whether the government purchases aircraft, removable kits or modifies existing aircraft – it will be cheaper overall, due to overseas contracts being extremely costly.

Australia is a good example to look at. The nation found itself in a similar situation during its 2019/2020 Black Summer bushfires when it was forced to contract multiple LAT and VLAT from other countries. The inefficiency caused more deaths than there should have been, which ultimately led to a national inquiry that forced the nation to rethink its capabilities and whether it really was ready for the next dry season. While the country has since then taken more responsibility, it was almost too late.

Plus, the firefighting industry in the UK is already vulnerable, and cannot afford to be unprepared. Early last year, it was revealed that the UK government had been slowly cutting its fire services by £140m since 2016. 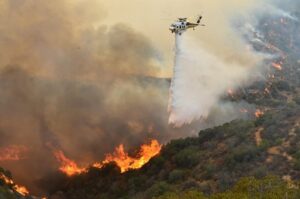 If the petition reaches 100,000 signatures over the next six months, the government will respond and potentially debate it in Parliament. But this will just mark the beginning of a long journey. Thomasson made it clear that stronger capability would not just benefit current generations, but those to come. “Why am I doing any of this?” he said. “Well I have two daughters and I want to do something to mitigate the effects of the changing climate. I am not a scientist, but as an engineer, this is something just maybe with some support, could be put in place.”