Alaska is called many things: The Last Frontier, The Great White North, and the list goes on. But, one thing you would not expect Alaska to be known for is a state with a sizeable aerial firefighting company. Anchorage-headquartered Pathfinder Aviation has called Alaska home since beginning operations in 2001.

Mike Fell founded the company and started Pathfinder exclusively operating the Bell 206. He initially ran charter operations that included the unique mission of rat eradication conducted in the Rat Islands of the Aleutian chain to the far southwest of Alaska and the South Pacific.

Aerial firefighting work was initially sought with the Bell 206B3 and 206L models. Being type three platforms, contracts for that type of helicopter were more sparse than the larger airframes at the time.

During the 2001 to 2014 timeframe, the company also began to lose a lot of its core government work to operators using the R44, as the State of Alaska began to allow the single piston market to bid for government contracts. That, along with the introduction of the R66 in 2010, was seriously eroding the ability of the Bell 206 to compete.

As government resource work began drying up for Pathfinder in 2012, the company started to pivot away from the 206, looking to the Bell 212 for continued growth, providing services to the blossoming oil and gas market in Alaska at the time. The company’s first foray into the twin market came with two IFR-capable Bell 212’s after winning a contract to provide services for Hillcorp Energy, operating year-round, both day and night transportation services out to the company’s rigs in the Cook Inlet.

Mike Fell, Pathfinder owner at the time, was, with the help of his staff, focused on putting together an effective safety management system for the company, pulling from his experience as a former Delta Airlines captain.

“He wanted a robust safety management system that wasn’t just on the shelf collecting dust as most of them were. We were trying to polish it to present to the oil companies and show them that we had a working and functional SMS program. Our entry into the oil & gas market wouldn’t have been possible without it. With his airline background, Mike had that vision of needing to meet this standard because other helicopter companies, like Era and Bristow, were operating at that level. So that’s what brought us to the table in the oil and gas market,” said Rogan Parker, now CEO of Pathfinder, of the work that went into putting together the contracts that cemented Pathfinder’s successful growth over the following years. 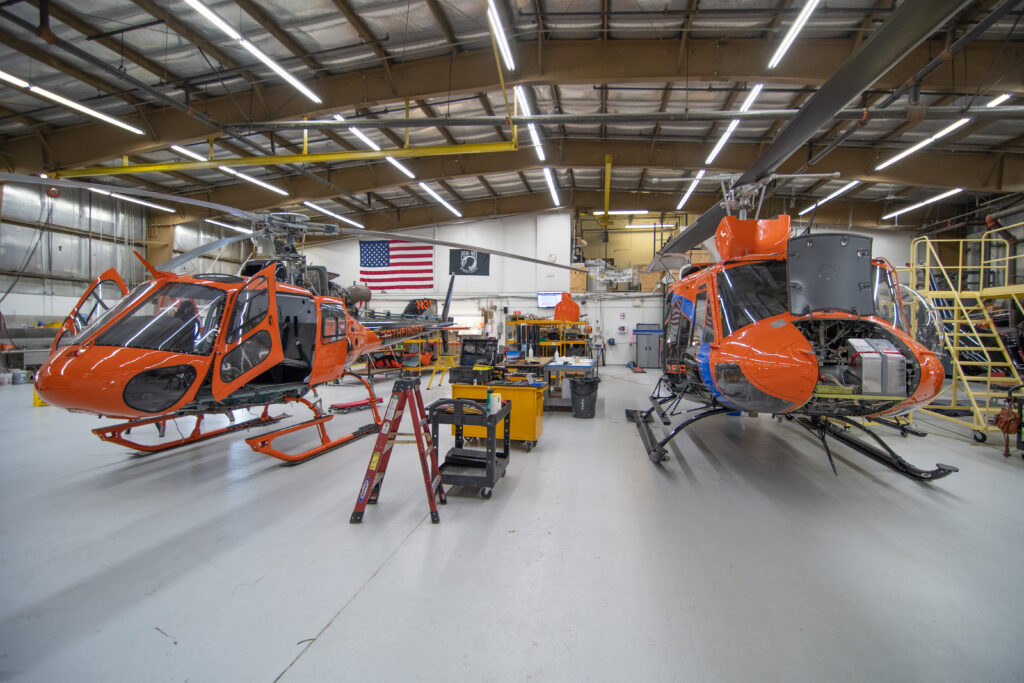 As Pathfinder continued to grow with the success of several oil and gas contracts, the company was sold to a private equity firm in 2017. However, the company’s trials were not over. In 2018, Alaska’s oil and gas market began a rapid downturn, forcing yet another pivot by Pathfinder to regroup and change its business model to stay profitable.

It was soon decided that Pathfinder would begin to pursue more fire-related contracts with several high-time pilots having fire experience, and the company had previously done call-when-needed fire contracts in Alaska.

Pathfinder began repurposing their previous oil and gas 212 fleet into aerial firefighting aircraft, focusing more on the type two aircraft market versus type three. It was successful enough that they had to initially lease several aircraft from Canada’s Eagle Copters to meet demand. This also opened the door for the company to see the benefits of the 212 Eagle Single aircraft. The company operating from their base at or near sea level allowed the aircraft to use the extra 700 pounds of useful load over the 205 platform, which Rogan considers their “perfect aircraft for our stomping grounds here in Alaska.” 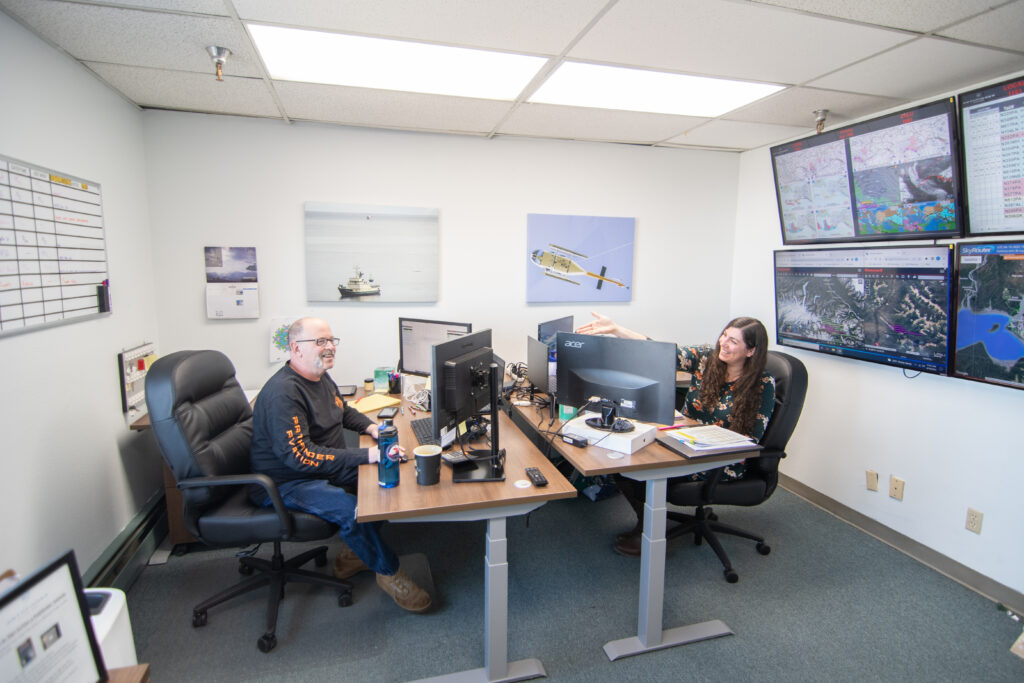 In 2018, Pathfinder was awarded two type-two contracts with the State of Alaska and secured a type-three contract in 2019. This has since grown to several other agreements, including ongoing exclusive use and call-when-needed work in the lower 48.

Due to an initial error in the performance charts of the Eagle 212, the aircraft was passed over numerous times for federal fire contracts; however, with the addition of the BLR Fast Fin system and revisions made to the performance charts, it was proven that the initial numbers were wrong. The 212 Eagle Single is now a competitive alternative to the 205 and UH-1H on contracts.

The company operates 13 AS-350 B2 and B3 models, although only one is currently working on a type-three fire contract. Also in the Pathfinder fleet are three 212 Eagle Singles, two of which can be equipped with a Simplex (now DART) fire tank, two Bell 212 HPs, a 412, an EC-135, and a Cessna 206 to support AOG response, crew transportation, and equipment movements. Pathfinder said goodbye to the longstanding Long Ranger fleet with the final sale of their last Bell 206 in 2021.

The minimum experience required for pilots has never been a big concern for Pathfinder. Pilots that work for the company average around 5400 hours of flight time, which allow Pathfinder to be highly selective. Between firefighting and their other complex mission contracts, Pathfinder works in some of the most inhospitable locations on earth.

Most of Pathfinder’s pilot staff work full-time on mineral, exploration and fire contracts, with oil and gas making up only a small portion of the business. Pilots can also work a mix of fire and heli-ski seasons that equate to the 182 work days that make them full-time employees of the company. The company looks for that unique skillset of pilots trained in the 212 and the Astar as the perfect fit for their business model.

With Pathfinder being remotely located for those living in the lower 48, the company does not require pilots to relocate to Anchorage. Those pilots residing in the lower 48 are paid travel allowance to and from wherever their work location is at the given time.

Maintaining such diverse business operations requires keeping pilots trained and up to speed. A task that Pathfinder takes incredibly seriously. For each discipline, pilots are trained separately for the specific job they will be performing, be it heli-skiing, aerial firefighting, or mineral exploration.

Due to the unique nature of working in Alaska, PAthfinder is investing in mission-specific training in real-world environments involving customers in most cases. Also, they leverage simulator training with FSI, Helisim/Airbus, third-party factory equivalent courses, and IIMC training with the locally based Fly-It sim. 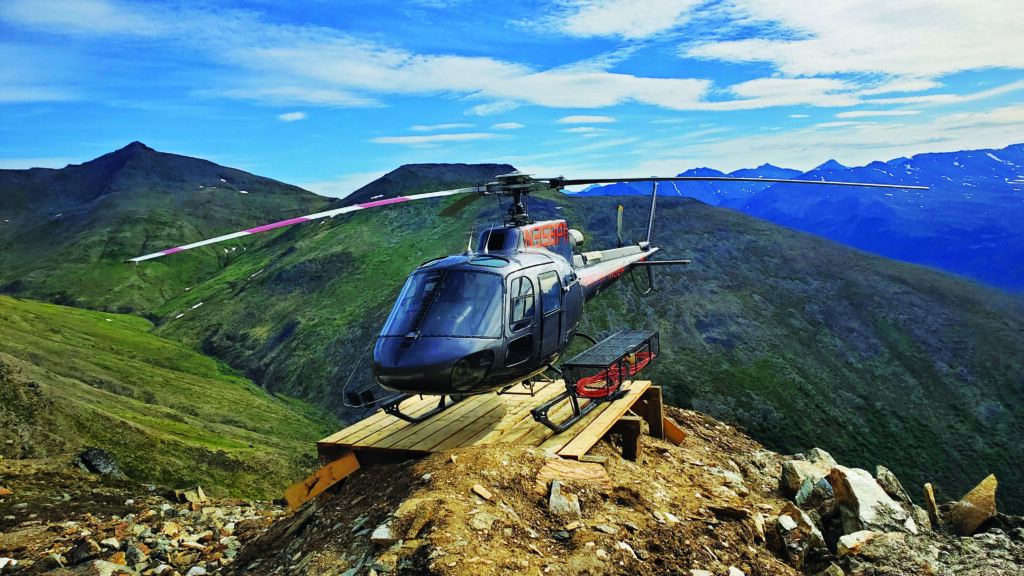 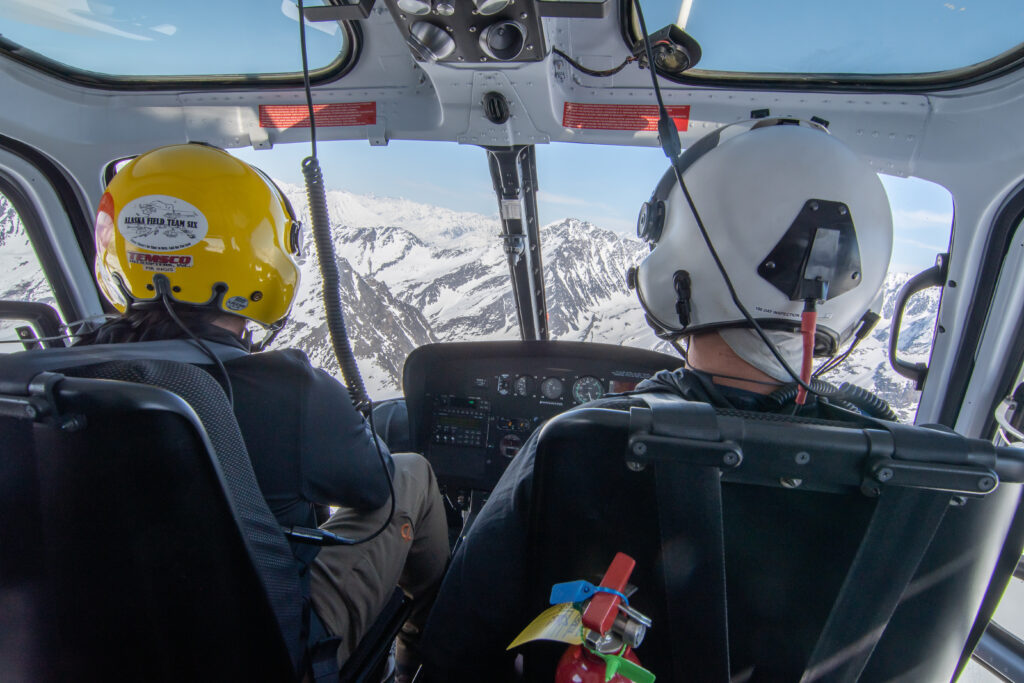 Previously, as a part of the oil and gas contracts, Pathfinder had a second-in-command program to bring up lower-time pilots. Thanks to Pathfinder providing stable year-round work, many pilots are long-time employees with ten or more years with the company.

Unlike many companies, Pathfinder pays their pilots not only for what they have accomplished by way of total hours but believes in paying their tenure and with what tasks they are uniquely qualified for regarding the company missions and equipment.

“Our pilots have a base salary, and then the more aircraft they’re qualified to fly, and the more jobs they’re qualified to do, the higher their daily rate. More holistically, we need depth in our pilots; we, as helicopter operators, need that. So the more we can cross train and provide an opportunity for folks, the better off we all are,” said Parker.

Pathfinder’s maintenance operation is the most bustling area of their operation at Merrill Field in Anchorage. Seemingly endless maintenance tasks are being completed on their fleet of 20 aircraft, which in the company’s mind is now part of a more comprehensive look at how they can improve their operation as they are rapidly outgrowing their space and their ability to maintain all of their aircraft as the fleet continues to expand.

Thankfully, plans are in place to expand their Merrill Field facility to accommodate their growth, with remodeling planned to start soon. Maintenance on the company’s Astar fleet is typically carried out from September through December, which is when the Bell medium fleet begins returning for that part of the fleet’s scheduled maintenance. This means the window is getting tighter and tighter thanks to lack of space and when contracts run longer than expected, when fire seasons extend, or other extenuating conditions. With such a large fleet, the goal for the Astar fleet will be to do one 600-hour inspection each month through 2023.

In addition to having a robust and constantly evolving SMS program at Pathfinder, the company also has a dedicated and full-time safety manager that drives the SMS program and everything related to in-house safety procedures, from maintenance to pilots and aircraft. With a fleet of 20 helicopters, the company also has an Air Operations Center within its headquarters that tracks all aircraft movements in real-time.

As the brainchild of previous owners Mike Fell and Rogan Parker, the center was modeled after a similar setup run in the Gulf of Mexico seen by Parker in the oil and gas helicopter industry. It is staffed by three aviation safety professionals that track not only aircraft movements through SkyConnect and Garmin InReach, but hours flown, pilot flight times, AOG status, parts and people movement, and any other operational tasks needed for the day-to-day operations of the company. This includes maintenance flights and monitoring through GPMS and coordinating replacement aircraft or mechanic transport in the case of an aircraft breakdown in the field.

While the aircraft fleet continues to grow for Pathfinder, the company will continue upgrading its Astar fleet. They will eventually phase out their B2 models for the B3s due to the high maintenance and overhaul cost of the Safran Arriel 1D1 engine over the updated equipment on the B3 model.

Like many companies competing for government contracts, Parker shared concerns about the MATOC contract issues and aircraft requirements many operators have spoken out about since the draft was released for comment in 2021, which drew massive resistance from the industry. 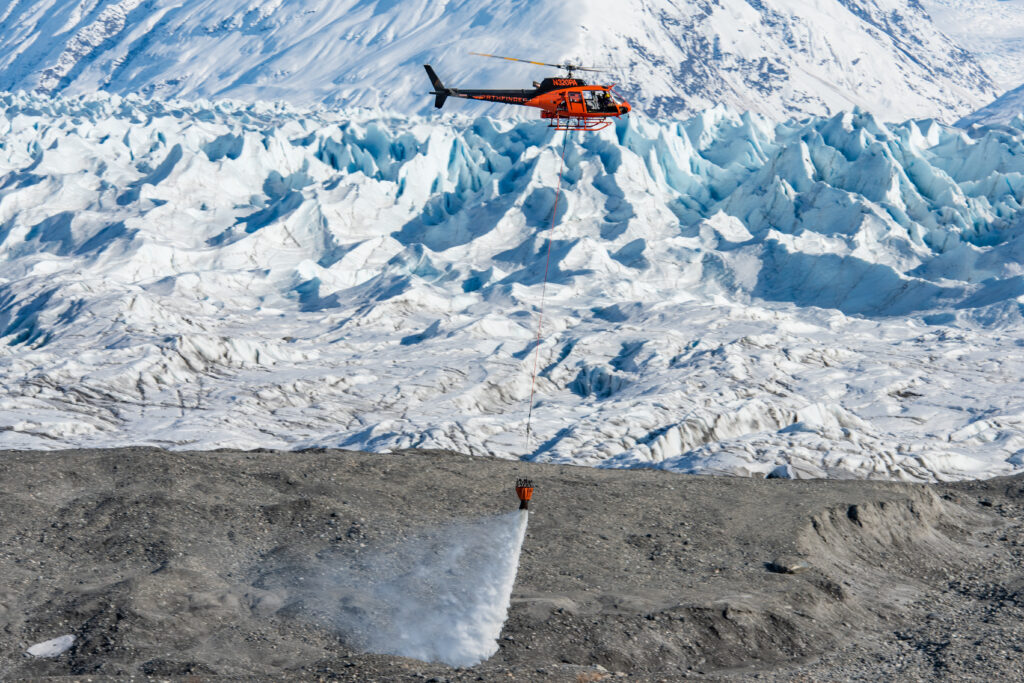 “We are definitely in a steady state, but not stagnant. We’ve had a lot of growth over the last few years, from an employee count and utilization standpoint but not much regarding the fleet size. We have adapted to the ever-changing environment of the helicopter industry; we’ve gone from flying year-round IFR contracts with 212s back to our roots of fieldwork. Just with different or reconfigured airframes. The MATOC will drive further adaptation, but our direction isn’t yet concrete.

While the industry still struggles with contract issues on the federal side, Pathfinder continues to do what its name suggests, finding a path to continued growth in the industry. That path has led the company to multiple pivots in its decades of operation. Despite the need to make drastic changes when required, Pathfinder continues to succeed where many others may have stumbled, finding a way to success through providing elevated safety to its customers and staff.