Unlike other countries, where aerial firefighting operates a little more autonomously in relation to agricultural aviation, Brazil’s industry is driven by it. During the last year, the Brazilian National Association of Agricultural Aviation (SINDAG) has intensified its work to support this aerial firefighting.

In addition to promoting several conversations with industry players (and renowned experts), the institution created a board for aerial firefighting and has provided technical assistance to various government levels for structuring contracting programs.

Thiago Magalhães, operator and president of SINDAG, shared his background in aerial firefighting. His family’s company, Tangará Aeroagrícola (one of Brazil’s biggest aerial application companies), started aerial firefighting in 2010 when they bought their first Air Tractor. They sought out foreign instructors since there were few specialized professionals in the country then. They helped to structure a contracting program in São Paulo for aerial firefighting in natural reserves. Afterward, they helped foster activity in the private sector, and today they provide services to the region’s large sugar and alcohol industry.

The company has also helped develop new equipment to adapt agricultural aircraft for firefighting, collaborating with the Brazilian manufacturer of fire gates. Thiago told us a little about their trajectory with these technologies:

“Our first aircraft were equipped with longitudinal gates. But we needed a solution that would meet agricultural demands (applying pesticides and dispersion of solids.) Brazilian aircraft sometimes operate as ag spraying and firefighting aircraft in the same 24-hour period. Then we came to need equipment that was as efficient as possible to control fires in high-density vegetation, so Sérgio Zanoni developed the 13-inch gate, and we installed the prototype. The results since 2019 are quite interesting. Even with a transversal gate, we achieve great efficiency, even in denser vegetation“. 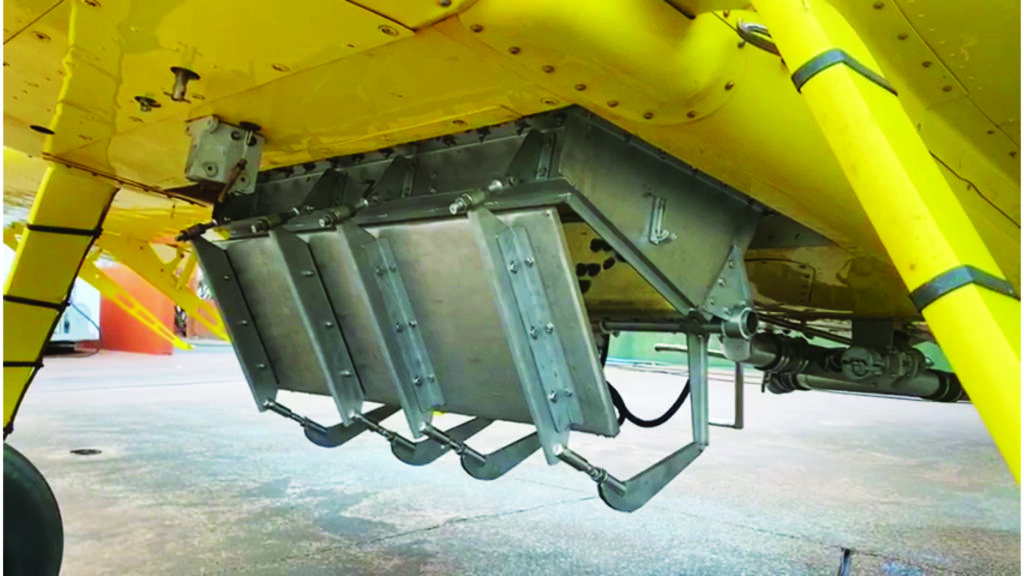 In addition to being an operator, Thiago has been helping the Brazilian firefighting industry through leadership, pushing the virtues of providing both services since the beginning of his first term as president of SINDAG in 2019.

“The demand for this service has always existed, but almost nobody was aware of using our aircraft to provide it. As aerial firefighting continued and became more widely seen, people were getting to know it and realizing they could also have access to it. Over the last ten years, we’ve increasingly used agricultural aircraft. SINDAG has helped a lot in solving the mystery of aerial firefighting and making it possible for all agricultural aviation companies to offer this service. I believe that this should intensify a lot in the coming years, especially with the private sector (farmers) contracting agricultural aircraft to fight fires both in crops and in the natural reserves of their properties [in Brazil, every agricultural producer is obliged to allocate at least 20% of their land to environmental preservation – reaching up to 80% in the Amazon region].”

Thiago also highlighted the increased visibility that the service generates for the ag aviation industry:

“Using agricultural aircraft in firefighting has helped us generate another vision for society about our work. The media is constantly reporting our importance for the environment, which contributes to breaking down prejudices that we suffer. We are flying this path to publicize the activity and have great success”.

He also gave us his perspectives on law 14.406/2022, which was recently approved to regulate the use of agricultural aircraft to fight forest fires:

“With the new legislation passed by the government, we will have more security for the agencies to hire. This will also spill over into the private sector: farmers and the whole ag industry will see the need to hire aircraft and realize that it is a tool that works and that it is viable. The law will certainly be a tool for expanding the service in the country”.

Authored by Senator Carlos Fávaro, the law includes using agricultural aviation in government guidelines and policies for fighting forest fires. The project provides for the outsourcing of firefighting aircraft, reinforcing the idle capacity of the more than 2,300 agricultural aircraft of the “Brazilian agricultural air force.” This will considerably reduce costs concerning the acquisition of aircraft in a country where the public budget constraint is always present, as highlighted in its explanatory memorandum:

“Instead of buying aircraft, hiring pilots, and bearing the entire cost of installations, maintenance, training, and personnel (a structure that would remain idle for eight months), the public authorities would outsource shifts and hours flown only in the dry season.”

The new model will be implemented as part of an integrated management system, adopting various measures and instruments that consider local, geographic, climatic, social, and economic requirements as part of a national strategy for preventing and fighting forest fires. It will be part of the National Environment System (SISNAMA), a structure formed by the Federal Union, States, and Municipalities agencies. It will contain general guidelines for using agricultural aircraft in contingency plans to fight forest fires over Brazil.

According to the law, environmental agencies’ contingency plans for fighting forest fires must have guidelines for using ag aircraft in these operations, including standards for the technologies and qualifications for the professionals. The law also provides for the possibility of public support for the industry, including the education and training of pilots.

In a country where agribusiness is so frowned upon by radical environmentalist fakes, the flying cowboys are the ones who have been at the forefront of forest protection.