Last week, the first aerial firefighting research station in Latin America was inaugurated. Established in São José do Rio Preto (state of São Paulo, Brazil) at the operational headquarters of Brazilian company Imagem Aviação Agrícola, the project was structured together with three other aerial application companies (Pachu, Produtiva, and Vale do Paranapanema), in addition to manufacturer Zanoni Equipamentos and the consulting firms SABRi – Sabedoria Agrícola and RTC – Gestão of Risk and Training.

The open-air laboratory was implemented to evaluate the performance of agricultural aircraft in firefighting, a first for Brazil, measuring the drop area and the effectiveness of each drop with different pieces of equipment. The data collected is of great importance for aerial firefighting in Brazil, allowing the industry to analyze the effectiveness of each ag aircraft for different types of fires, enabling Brazil to develop best practices for the industry. 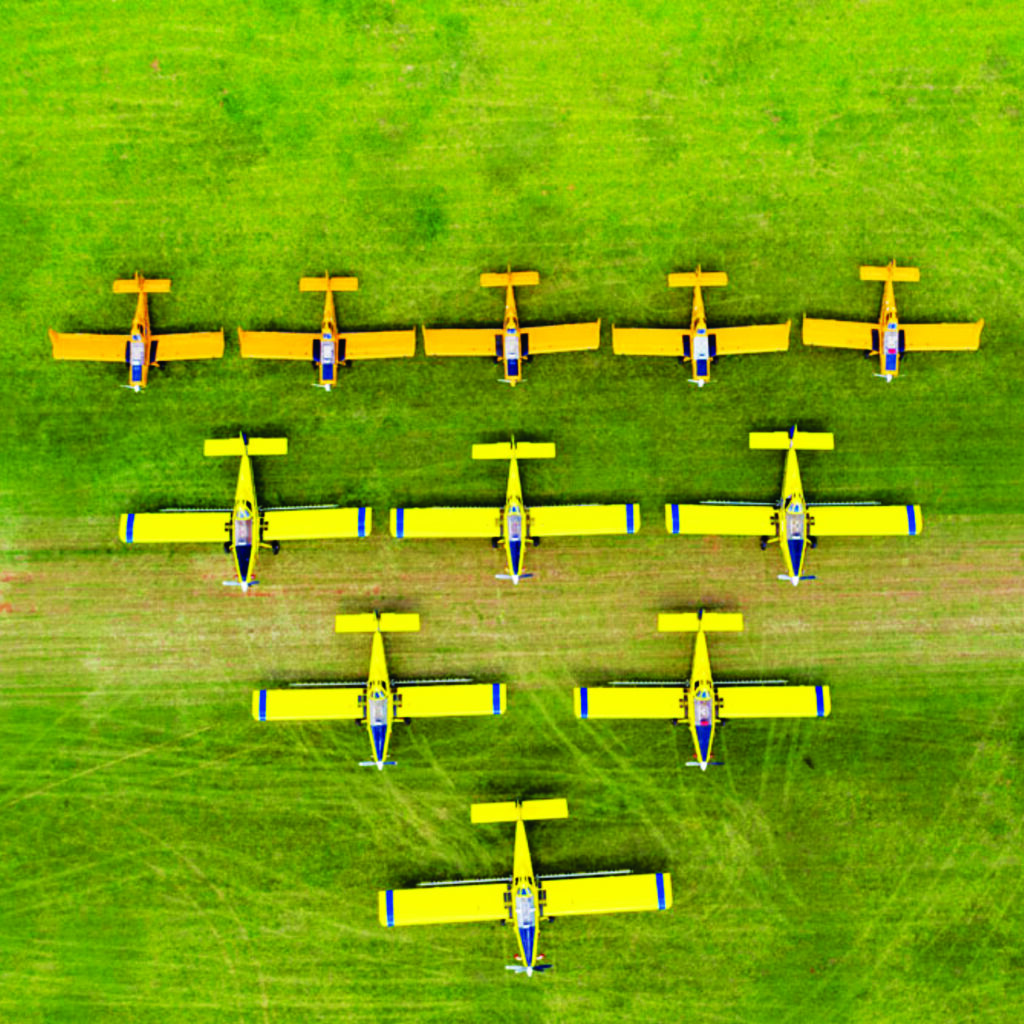 Six aircraft were evaluated in the first research protocol: the Ipanema 202, a native South American manufactured aircraft; Air Tractors 402, 502, 602, and 802; and a Thrush 510, all equipped with Zanoni fire gates. In addition to helping contractors (such as sugar mills, farmers, and governments) better understand aerial firefighting technologies, the information collected will be an “international case” for discussion on the use of agricultural aircraft in aerial firefighting.

The research mobilized more than 50 professionals and was supported by Brazil’s SINDAG (Brazilian National Agricultural Aviation Association) and the agronomy faculty of the Centro Universitário de Rio Preto (UNIRP) university.

Imagem Aviação Agrícola is an aerial application company located in Brazil’s sugar and alcohol hub, one of Brazil’s most significant exports globally. Incorporated in 2000 in São José do Rio Preto, the business is the result of a partnership between Rodrigo Fernandes, an agricultural pilot since 1997, and Jorge Humberto Toledo, agronomist and vice president of SINDAG since 2019. With two operational bases (in the state of São Paulo), almost all of its spraying work is in sugarcane crops. The company is one of the leading operators in Brazil, operating a large fleet that includes six Embraer Ipanemas and seven Air Tractors (one AT402, five AT502, and one AT802). 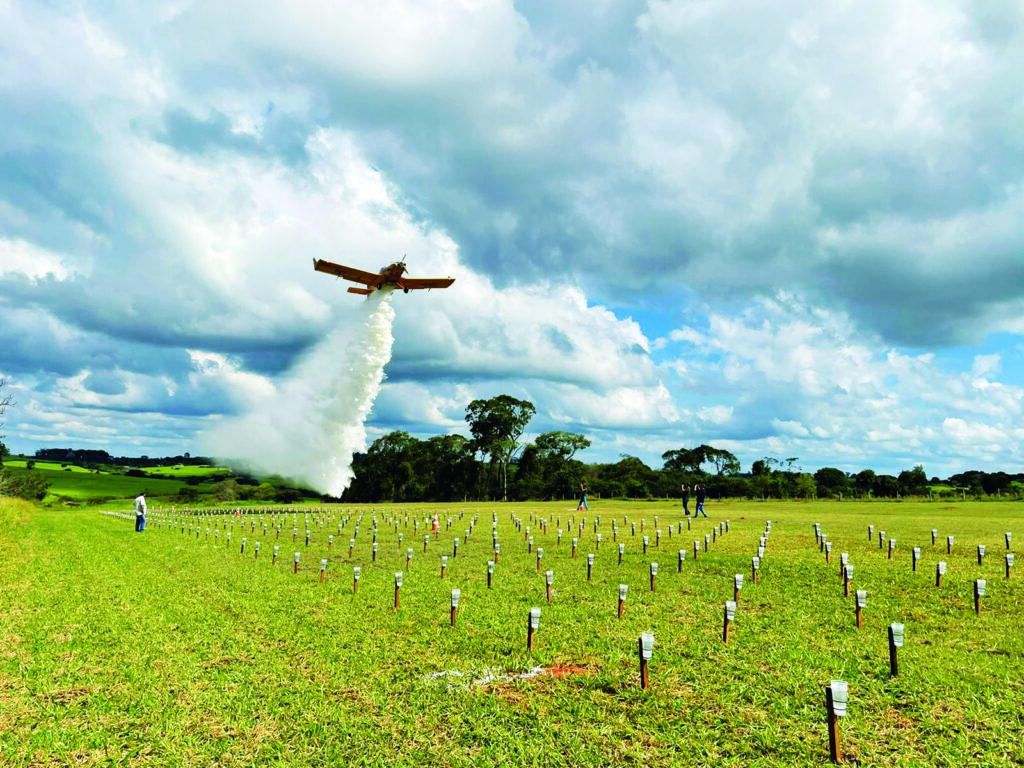 Imagem started firefighting operations in 2014, working for the state of São Paulo, being one of those responsible for helping the local government’s aerial firefighting program. In addition to providing services to the civil defense (fire department) and the federal government in protected areas over the last several years, the company also offers services to the sugarcane industry on a call-when-needed contract with large sugar mills at a fixed rate per hour.

The two friends, who have been at the forefront of aerial firefighting in Brazil for years, have now helped develop the first scientifically based study of airborne asset effectiveness, building the first research station for the use of ag aircraft in this activity, contributing to the industry globally.

“This work only demonstrates the high degree of maturity that the Brazilian ag aviation industry has reached in fighting fires. We have advanced with a lot of research and development to reach a standard of excellence that meets the needs of Brazil. It is necessary to offer great professionalism in aerial firefighting operations within our area, which adapts to our country’s needs”, highlighted Toledo.
THE REASONS
There is an appropriate use of specific aerial firefighting technology for each type of fire, with each crop requiring a different amount of water to control hotspots. An aircraft is an auxiliary tool in firefighting, fundamental for cooling areas where ground brigades are working or for reaching initial fire outbreaks in places difficult to access by foot. 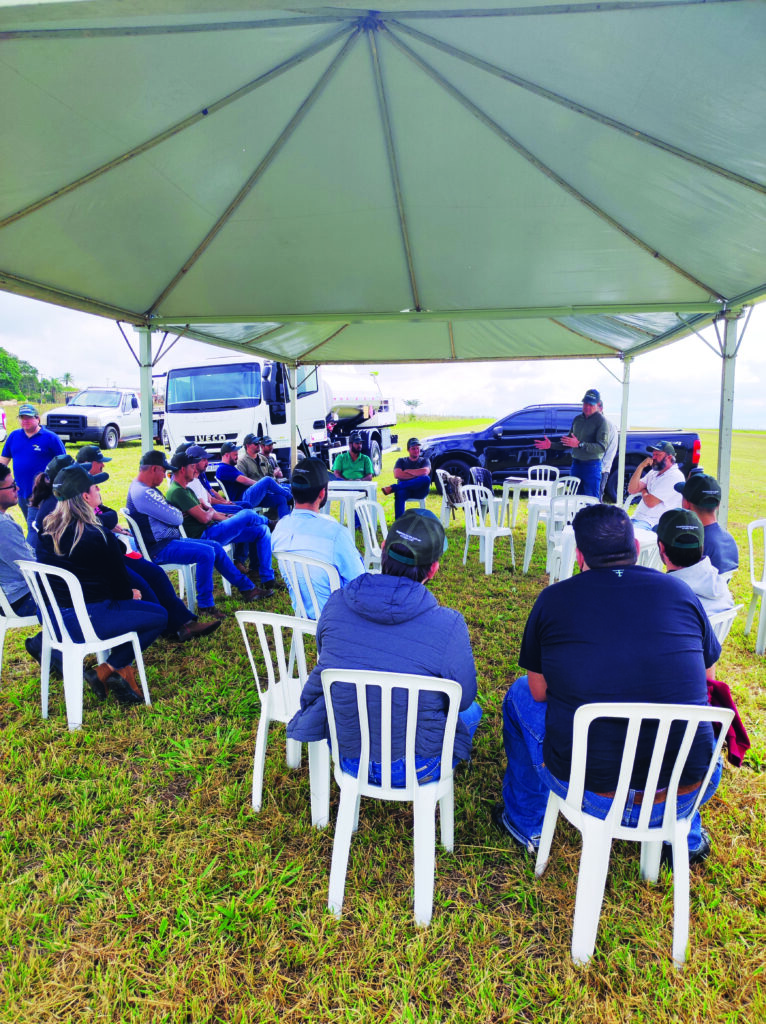 The efficiency of aerial firefighting (whether it is carried out by multi-engine, single-engine, or rotary-wing aircraft) is measured by the density/coverage of liquid over the target. In other words, how much fire retardant (water or chemical) reaches the ground when it is released by air?

The main indicator for its evaluation is in liters per square meter (L/m²) or gallon per square foot (gal/ft²). The scientific literature determines the ideal deposition of retardant for an effective application according to each vegetation type. According to the National Fire Danger Rating System (NFDRS), the required coverage is as follows:

From these parameters, it is possible to assess whether an aerial firefighting tool is efficient or not for a given type of fire. An aircraft dump will offer different depositions at different locations of the total drop location. Thus, it is not enough to find only the maximum coverage provided at a specific point (i.e., it is inaccurate to say that an aerial firefighting technology offers a particular deposition in L/m² or gal/ft²). It is also necessary to assess which proportion of the drop location falls within the parameters mentioned above. 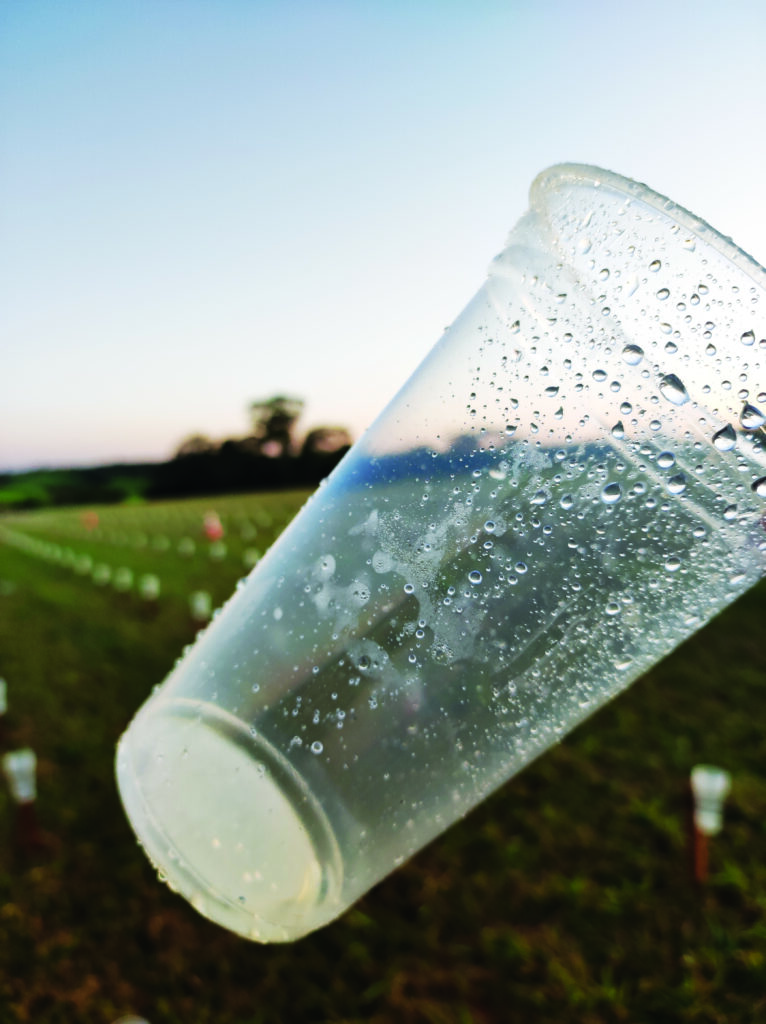 That said, the research station was established for two purposes: to foster the professionalization of the industry (demonstrating the importance of proper equipment and helping to develop a “certification protocol”) and to present/compare the Brazilian technologies with other models around the world.

After a week of work evaluating the most popular agricultural aircraft in the Brazilian market, the research found the two main indicators of aerial firefighting technologies (ground penetration in drop location and dispersion) for each of them equipped with Zanoni gates:

After the first stage of the project, some interesting conclusions were found to contribute to Brazilian agricultural aviation and the use of SEATs around the world, highlighting: (1) the total incompatibility of the standard agricultural aircraft system for this work; (2) the possibility of using smaller aircraft for low-density vegetation fires (3) the potential of excellent results with transversal/hybrid fire gates.

In several countries worldwide, it is still common to see attempts to carry out aerial firefighting with standard ag-gate boxes. The fact is, discharging water from the aircraft leads to the belief that this will contribute to controlling fire. But if it does not reach the required dispersion volume, its use can mean not only a waste of time and resources (since it will not generate significant results in controlling the fires) but also create the opposite effect. If the amount of water or retardant dumped by the aircraft is not enough, the mass of the liquid can only “push” more oxygen toward the fire source, increasing the fire strength even more.

A second interesting finding from the research was related to the use of small agricultural aircraft. For a few years, using piston aircraft (such as the Embraer Ipanema and Cessna 188) for firefighting in Brazil has been common among farmers. Although there was always a theoretical discussion that small-capacity aircraft would not be efficient for this service, during all drought seasons, they had been performing this task. 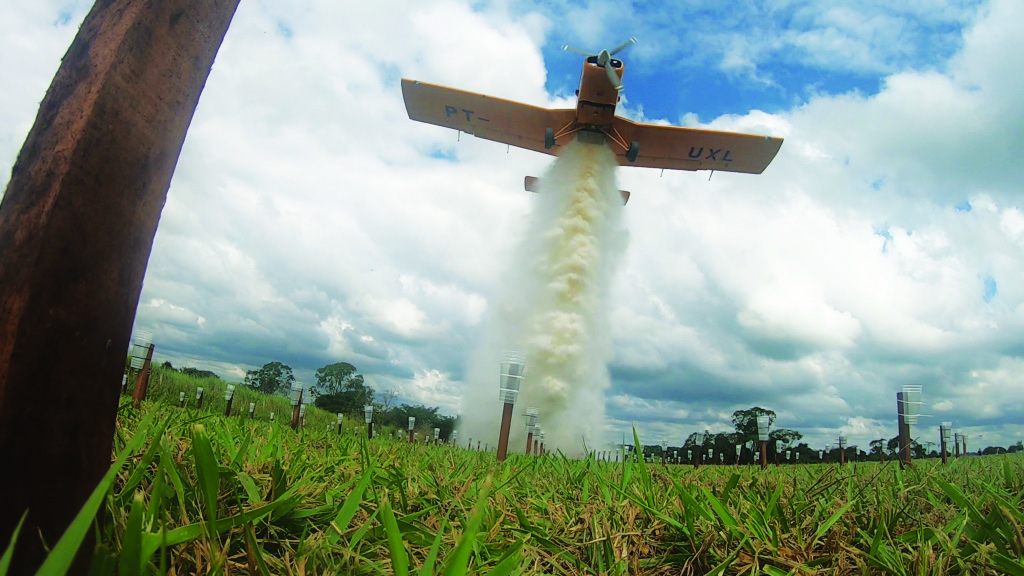 The data collected by the project indicated that, with the proper equipment, a 200-gallon aircraft could indeed be viable in controlling fires in pastures and crops. Using these new technologies makes it possible to use a fleet of more than 1500 Brazilian small ag aircraft to protect farms around the country.

Finally, the research indicated that transversal opening gates (single door) could offer excellent results and are suitable for fighting fires in high-density vegetation, such as savannas, tropical forests, and pine plantations. Countries with weaker public sectors and smaller state budgets have stood out for developing an aerial firefighting model different from countries in the northern hemisphere (where contracts are usually governmental).

In reality, this activity has been driven by the private sector, where several farmers and agribusiness companies have contracted aerial application services to protect crops and private forests against fires. The bigger single-door gates fit perfectly for this demand.

In addition to offering excellent dumping for firefighting in high-density vegetation (with scientific proof for this work), they are compatible with the agricultural system and work for liquid application and solid spreading. The routine of ag pilots in these regions, with up to three crop seasons, often involves spraying agrochemicals in the morning and fighting fires at the end of the day. 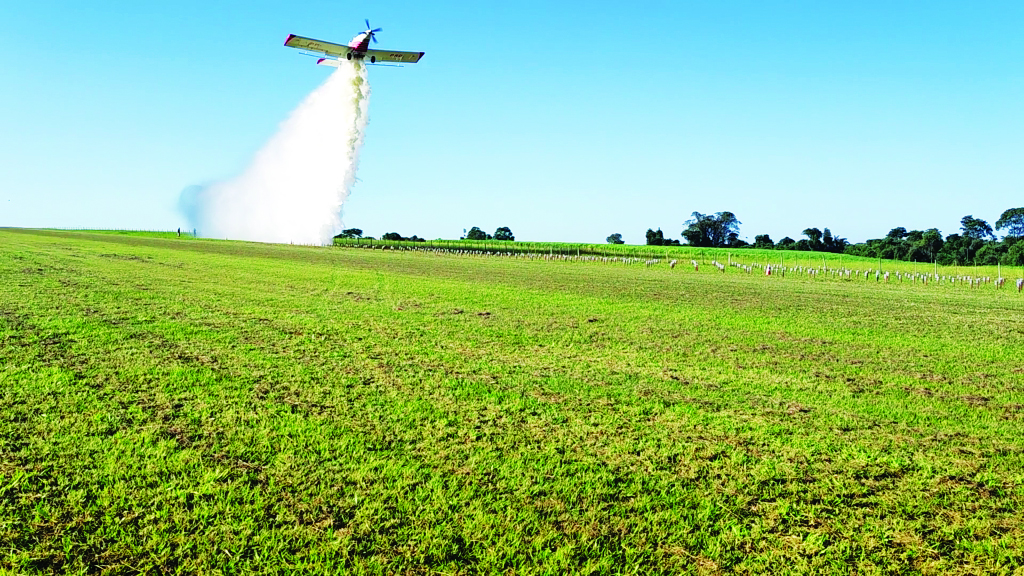 Bridger Aerospace Expected to Begin Trading on the Nasdaq