On Tuesday, November 22, 2022, the Hellenic Air Force’s 355th Tactical Transport Squadron, which operates Greece’s fleet of super scooper aircraft, celebrated its 75th anniversary. The event was hosted in the squadron facilities in Elefsis Air Force Base, with the presence of many officials, including the Chief of Staff of the Hellenic Fire Corps, Lt. Gen. Alexios Rapanos, the Hellenic Air Force Chief of Staff, Lt. Gen. Themistocles Bourolias, Deputy Minister of Defense and former Secretary of Civil Protection, Nikos Chardalias and his Excellency, the Ambassador of South Korea, Jung Il Lee.

Upon arrival on base, the guests were greeted with the sight and sound of two CL-215s starting up and getting ready to depart on a training sortie. The fire season may have passed, but the squadron personnel trains hard, preparing for next summer.

The event was also attended by retired personnel who served in the Squadron in its long history, including Korean War Veteran Lt. Col. (ret.) Akrivos Tsolakis, who was invited as a speaker for the event. 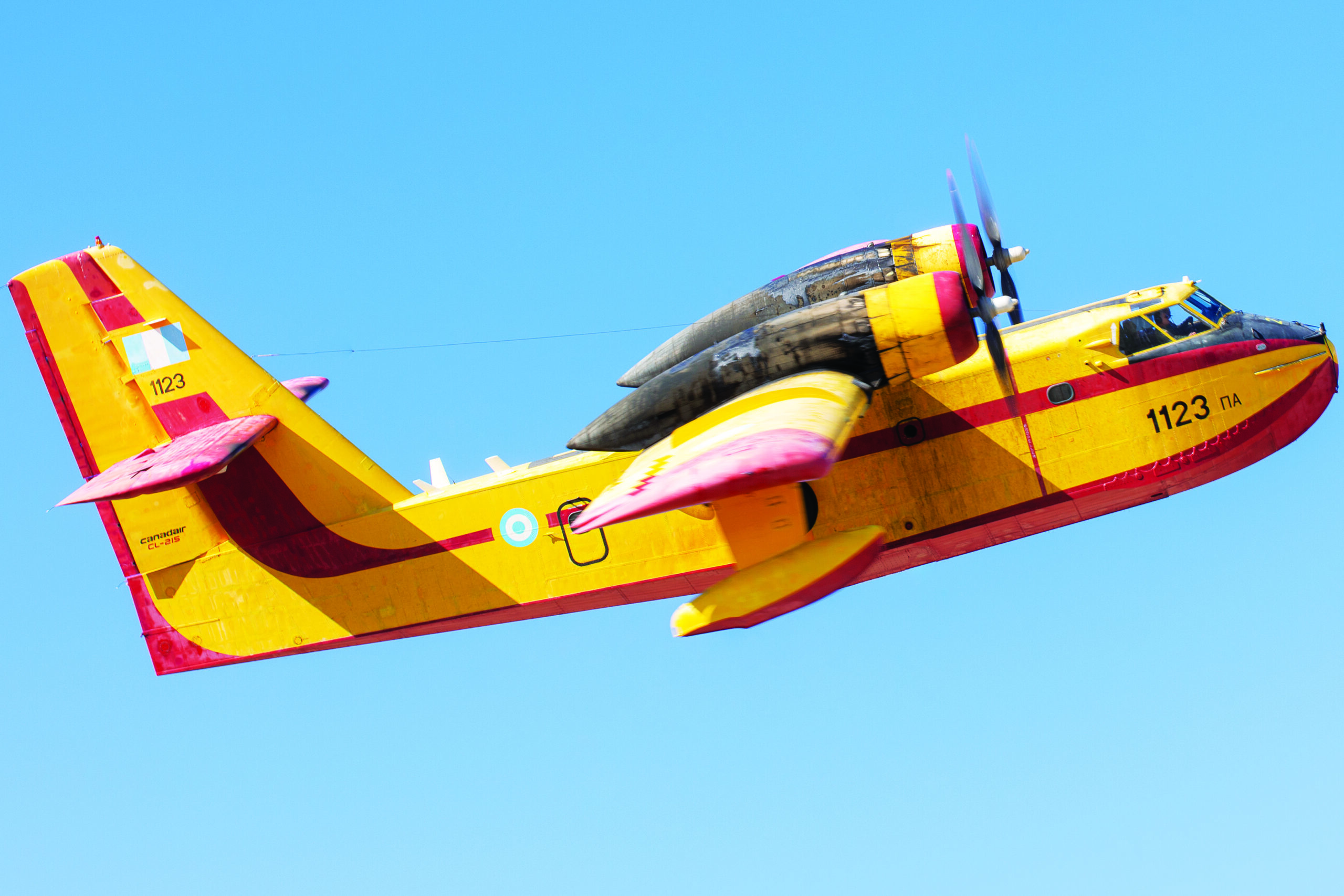 The ceremony began with the greeting of the Squadron commander, Lt. Col. Elias Veloudos, who addressed the attendees, officials, and current and former personnel of the Squadron.

The Squadron hosted a memorial service for its fallen aviators, followed by the Chief of the Hellenic Air Force General Staff, Lt. Col. Bourolias, greeting the Squadron and its personnel, active and retired, and referring to its history and its worth as an asset dedicated to the protection of Greek forests and the lives and property of Greek civilians.

Following the Lt. Colonel, the Deputy Minister of Defense took to the podium, highlighting the Squadron’s role as the tip of the spear in aerial firefighting from first to last light each summer. After thanking them for their heroic service, the Deputy Minister highlighted the demanding conditions the crews face when flying their missions. 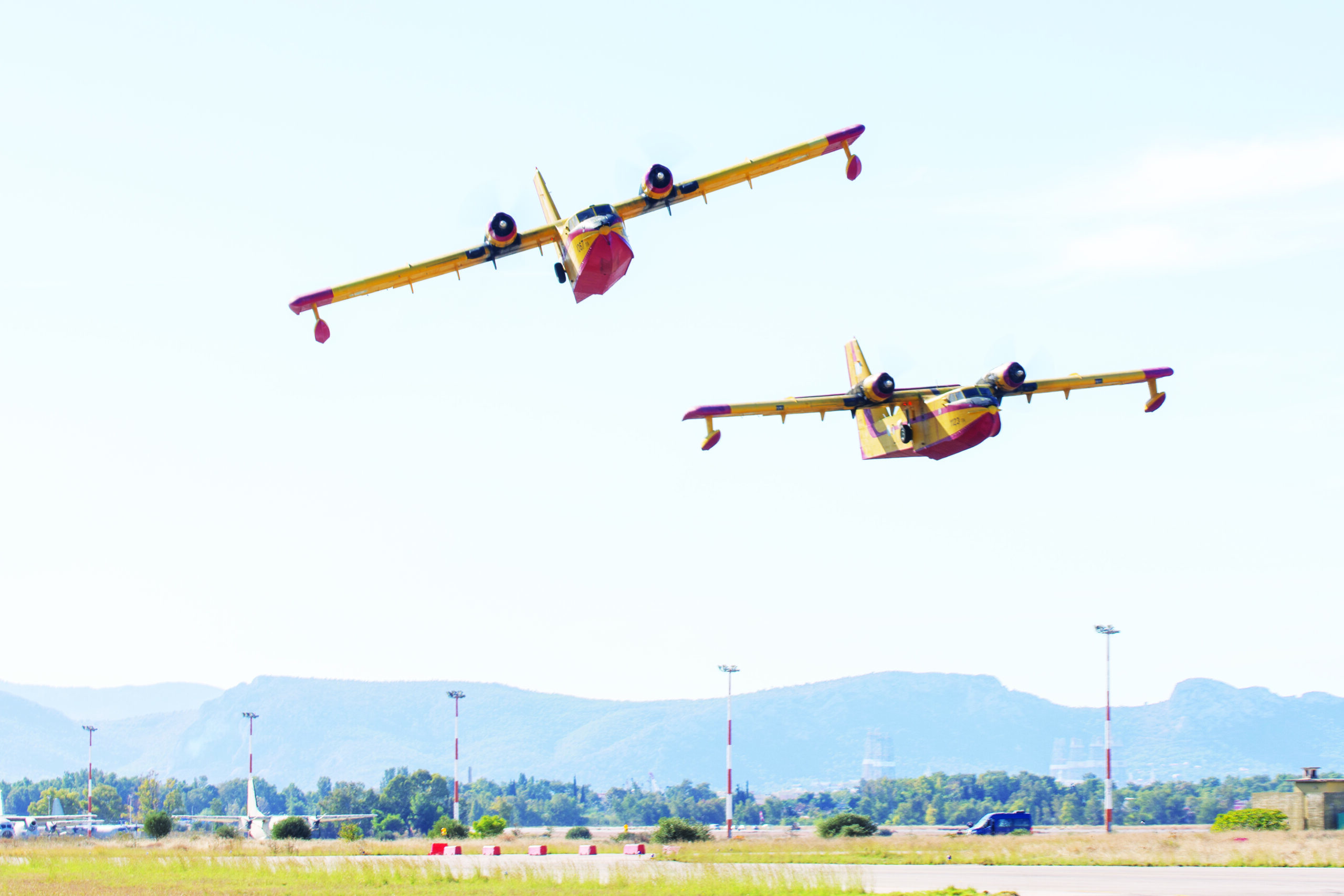 After the Deputy Minister’s speech, a speaker from the Hellenic Air Force History Directorate, Maj. Evangelia Tsoumaki presented a history of the Squadron from 1947 to 2022, detailing the Squadron’s successes over the last 75 years.

As the presentation concluded, 92-year-old Lt. Col. (ret.) Akrivos Tsolakis gave tribute to the squadron members and their arduous mission and the history behind the squadron’s history of saving lives, both inside the borders of Greece and abroad during their deployments in Korea, the Republic of Congo, Cyprus and Turkey.

Lt. Col. Tsolakis gave a very powerful speech which concluded with his Excellence, the Ambassador of South Korea in Greece, Jung Il Lee expressing his personal gratitude to the veteran for the Squadron’s service and then presenting him with one of nineteen letters written by Korean students, descendants of families rescued during the Squadron’s deployment. The students in the Department of Greek Studies at Hankuk University of Foreign Studies in Seoul. The letter was read over the microphone to the attendees of the ceremony by the Deputy Minister of Defense Nikos Chardalias.

The event concluded with a low pass made by two CL-215s who completed three low passes in total, demonstrating some of the demanding maneuvers required by the crews during the fire season, culminating with a break above the aircraft placed as a static display in front of the ceremony. 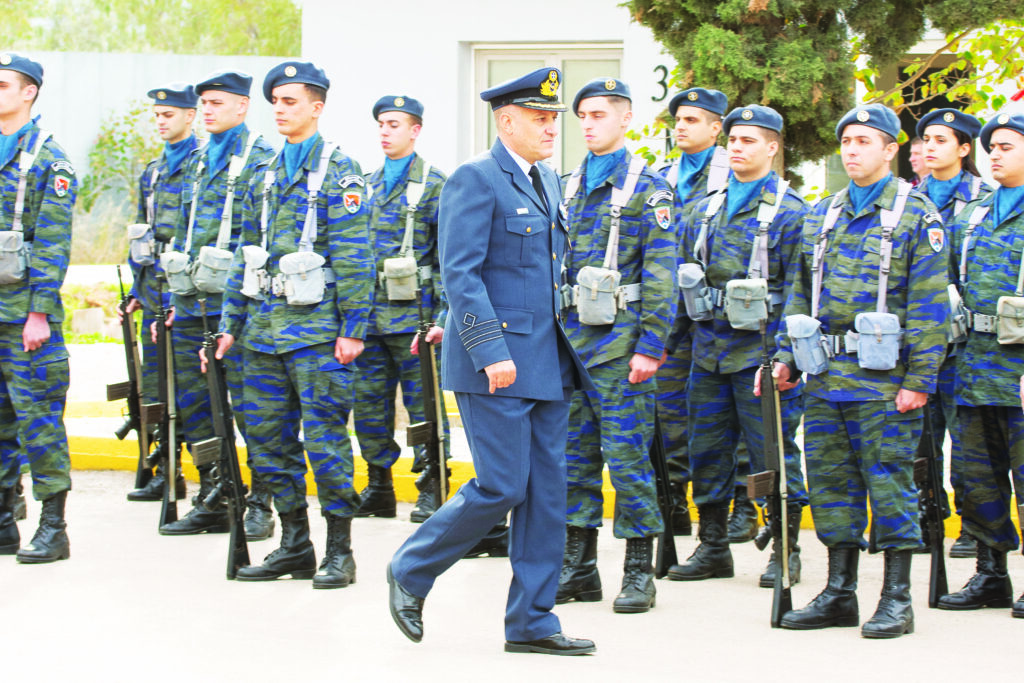 The 355th Tactical Transport Squadron began as an evolution of the 13th Light Bombardment Squadron, as the 355th Transport Squadron, formed in 1947 – with its initial base being the former Hellenikon Airport in Athens – using C-47 Skytrains. Eight months after its inception, the Squadron moved to Elefsis Air Force Base, where it remains.

In 1950, a flight of seven aircraft and their crews, named the 13th Group, flew to South Korea, taking part in the Korean war flying logistics and medical evacuation missions. From July 17 until August 5, 1960, the Squadron flew evacuation missions for Greeks living in the Congo. A similar mission was repeated in 1961, but with UN-supplied aircraft.

In December of 1975, the Squadron received the first five Canadair CL-215 aircraft, beginning its career as an aerial firefighting squadron. The Squadron changed its name from 355 Transport Squadron to 355 Tactical Transport Squadron and began flying firefighting missions to protect the country’s rich forests under the supervision of the Agricultural Ministry. Deliveries of the CL-215s were completed on May 11, 1990, with aircraft #1123.

In July of 1982, the Squadron received the last few remaining Nord Noratlas after disbanding the 354th Tactical Transport Squadron, which would become known as the “Noratlas Group.” Dornier Do-28 Skyservants would later replace these Noratlas aircraft. In 1987, the Skytrains of the 355 Squadron flew to Sedes airport, where they would be based, flying as the independent 355.1 Group until their retirement in 2008. The last Dornier Do-28 Skyservant retired in 2010, making the 355th Tactical Transport Squadron one dedicated to aerial firefighting.

In May of 2003, due to the large volume of aircraft and crews, it was decided by the Chief of Staff that the Squadron would split its assets. The more modern CL-415s were detached, creating a new Squadron, the 383rd Special Operations and Aerial Firefighting Squadron. The technicians were split between the two aircraft squadrons and the newly formed Aircraft Maintenance Squadron.

To this day, the 355th Squadron carries the name “Hephaestus,” after the Greek god of Fire. However, they are more affectionately known as “Dragons” due to the roaring sound of the two Pratt & Whitney R-2800-83AM Double Wasps, which power the aircraft.

In its long history, the Squadron has mourned the loss of thirty-one aviators, nine of whom perished fighting fires in Greece, with its most recent one being on July 15, 2000. These aviators are depicted in the Squadron’s new crest with two branches of laurels with thirty-one leaves surrounding the number 75. 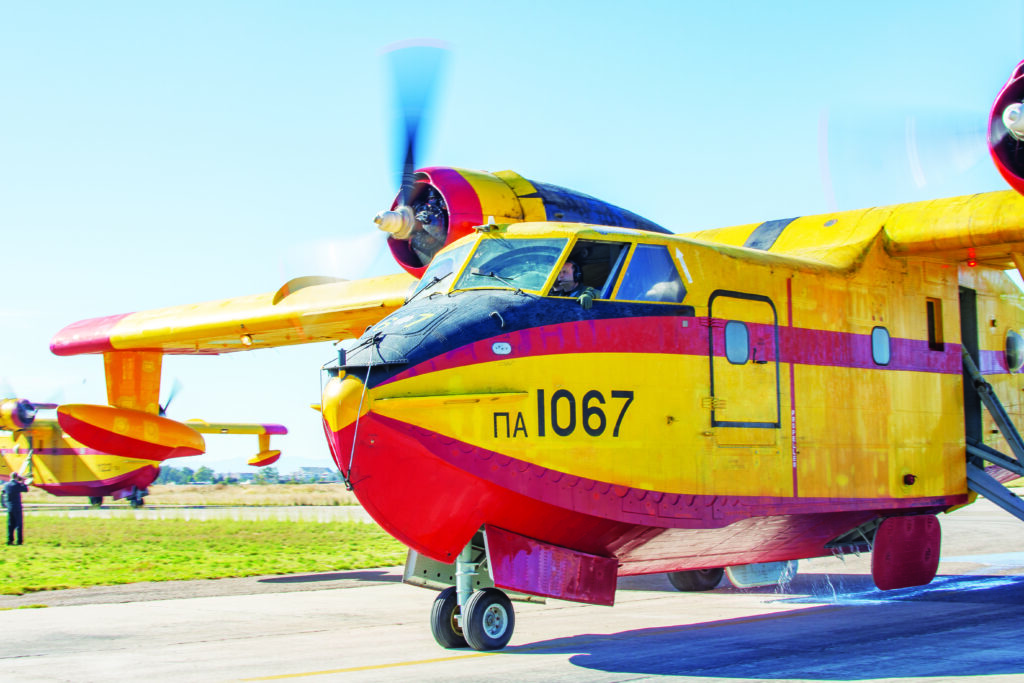 The 355th TTS flies the unmodernized, “classic” CL-215. Crews can fly missions from 3 to 3.5 hours of firefighting per sortie, after which the aircraft return to base for refuel and inspections before taking off for the next sortie.

Every year, during the fire season, the Squadron deploys aircraft and crews alongside the country’s other aerial firefighting assets to various airports around Greece to provide a shorter response time and a longer intervention. As seen in recent years, summers in Greece bring along a season of wildfires, some devastatingly large. This means the aircraft need to be as close as possible to the incident to ensure maximum effectiveness.

After a full day’s work during mega-fire incidents, ground crews fight their very own battles, as the aircraft need to be inspected, serviced, and prepared during the night and ready to take off at first light. Sometimes, another aircraft must be prepared on short notice to take part in the incident. Groundwork is critical, and during the fire season, these crews carry out the task of keeping these “dragons” in the air and ready to intervene at a moment’s notice. 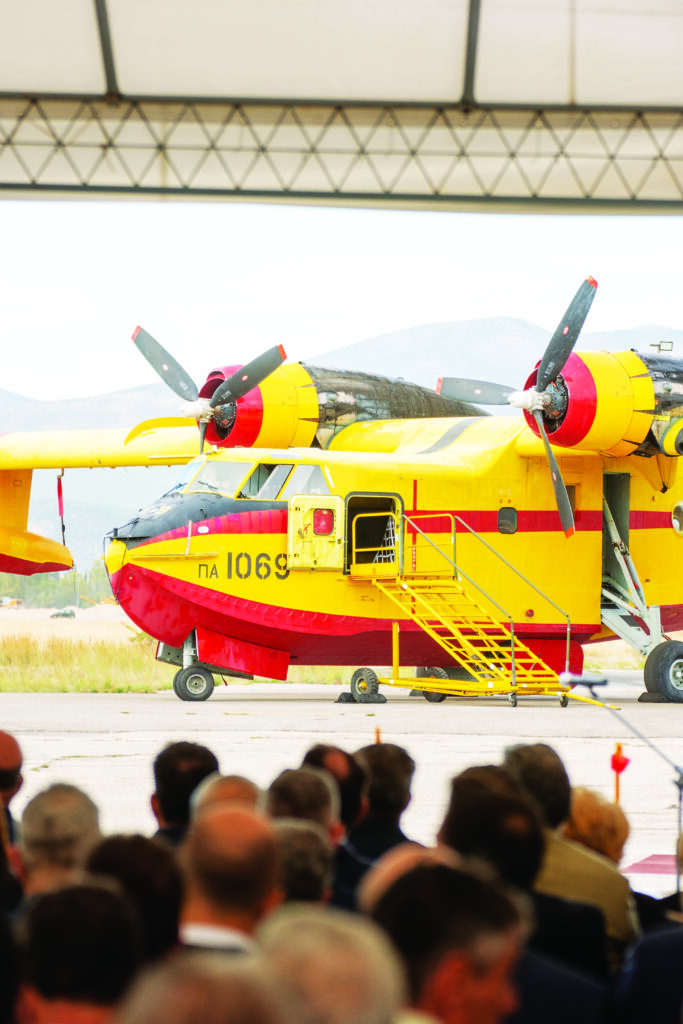 Given the engines’ older technology, Pratt & Whitney had set a maximum allowed ambient temperature – 38oC or 100oF – above which the engine cannot be started. To solve this, the Squadron deploys aircraft to nearby island airports that offer cooler weather, allowing the aircraft to start up without issues.

The Squadron’s history, however, could be about to receive a new chapter. Nikos Chardalias, in his term as Secretary of Civil Protection, announced that Greece would reinforce its aerial firefighting assets by purchasing 36 Air Tractor aircraft and inducting in its arsenal the future Canadair CL-515 aircraft, along with an upgrade of 7 of its CL-415s. In this case, the Squadron will continue its crucial work for many years to come.