In 2002 the Sacramento County Government identified a need for aerial firefighting support entrusting that support to Sacramento Metro Fire District. After a feasibility study recommended that the county budget could sustain the development and ongoing ability to operate an aerial program, Sacramento Metro Fire District, like many other agencies looking to begin operations in aerial fire suppression, looked to the 1033 government surplus program to obtain their first few airframes. 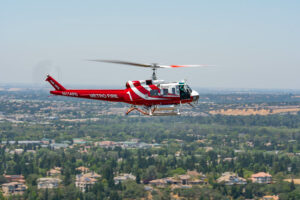 This move by the agency happened right as a merger between Sacramento County Fire and the American River Fire Department occurred to form what is today Sacramento Metro Fire, with the increased capacity of the combined agency, so too came the ability for the larger agency to take over the space of the McClellan Fire Department property. Now called station 115, the station house that was initially part of the separated department before the merger is now where Sacramento Metro Fire’s aviation unit is now based on McClellan airfield. Station 115 at the time of the union was used as a cadet base for the agency to run drills; that location is also where Sacramento Fire pilot Bryce Mitchell began his first assignment as a teenage cadet, where he would eventually return as a pilot.

Beginning a two aircraft program, the agency obtained several UH-1H airframes from the California National Guard. N114FD, known as Copter 1, began service with the agency shortly after inception. Though the aircraft now boasts a myriad of new equipment, the first UH-1H for the agency was equipped with an Isolair tank and an internal hoist system. Although the agency does have Bambi Buckets available, due to the agency flying over congested populated areas a majority of their flight time, the agency decided to initially use a belly tank, which they have continued with over the years. 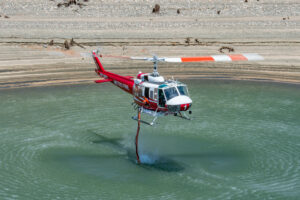 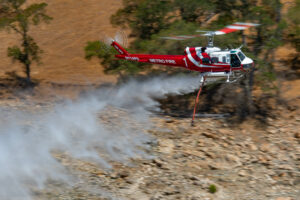 Throughout their nearly twenty years of operation, the agency has modernized tanks, switching in 2006 to a Simplex (now DART) 364-gallon belly tank for both aircraft the agency flies.

In 2008, Sacramento Metro Fire obtained a second UH-1H and began upgrading both aircraft to be as capable as possible for aerial firefighting and search and rescue missions, adding external hoist capability. Over time as budget allowed, both aircraft were made NVG capable in 2016, which increased the agency’s response availability for aerial firefighting and search and rescue operations from daytime-only operations to full 24/7 capability when needed.

This increase in capability also allowed the aircraft and crews to be fully deployable on state and federal deployments for both fires and search and rescue operations as needed in California for both day and night operations.

Initially, the agency had staffing of just a pilot and a flight officer each shift, but as the department’s needs have evolved over the years, each aircraft is now staffed with a pilot, flight officer, and a third rescuer role. The Rescuer is responsible for all aft cabin duties and EMS care. The flight officer manages the aircraft, mission plan, operates the hoist and coordinates with air attack or other aircraft. 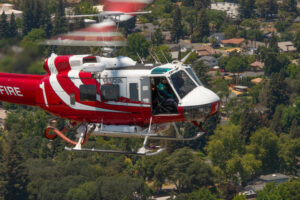 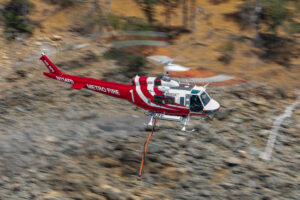 The crew can increase to four when the aircraft is dispatched to a search and rescue mission, adding the fourth crew member as a dedicated rescue team member that will perform the winch rescue and life-saving measures and stabilization of patients to be airlifted in the helicopter. These team members are sourced from ground units and activated on shift when needed. 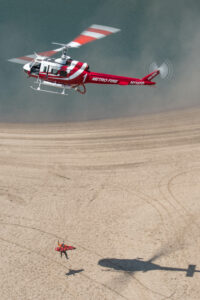 Starting the unit involved tapping people’s experience within the agency, tapping one of the first pilots for the crew. This prior Vietnam-era Huey pilot worked for the agency as a battalion chief at the time. Flight officers were also sourced from previous aviation and military backgrounds, along with some initial team members that functioned in the crew chief role that had previously worked on helicopters and as members of helitack crews for other agencies both in the United States and overseas.

While it may surprise many, Sacramento Metro Fire’s aviation operation is still seasonal from May through mid-November. The base is manned 10 hours a day by a crew of three for one aircraft, although that can change instantly at the onset of a large fire, a deployment, or if a search and rescue operation is underway requiring a fourth crew member to join the aircraft. The remainder of the hours during the peak season, although available 24/7, is dealt with on an on-call basis with a response time of being skids up in under an hour. 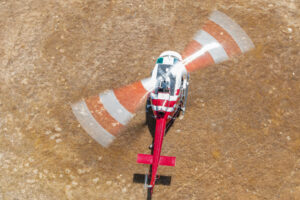 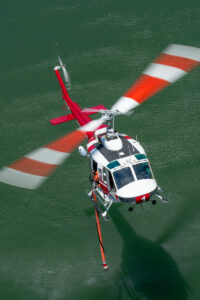 While Captain Mitchell states that it is always a fluid situation, the aviation budget and staffing are constantly changing. However, due to the workload continually increasing, he envisages that hopefully, within the next several years as budget allow, the unit will eventually morph into a full-time operation that is staffed 24/7—allowing full-time crews to better serve the citizens of Sacramento County and their surrounding response areas.

Being an agency that has grown slowly over time, pilot selection, training and retention have often been one of the most complex struggles for the unit. Formerly sourcing all of the agency’s pilots from external applicants who had either law enforcement or military flying experience, the agency has completed the first round of selecting and training their first pilot from within the agency. Captain Bryce Mitchell is the first pilot in command of an aircraft to come from the department’s internal ranks.

The task of getting the agency to agree to internal applicants was assisted by the unit’s Chief Pilot Montie Vanlandingham, who persisted in explaining the benefits of internal hires and training from the ground up. The agency eventually agreed after it was explained that there was a potential for failure in the future as current pilots’ attrition and age started to become a potential issue. 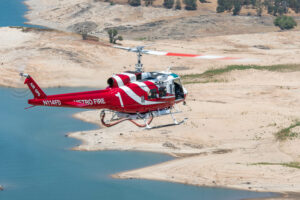 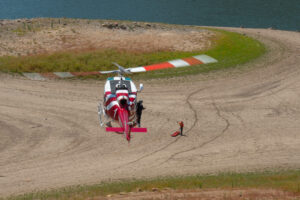 While there are no hard and fast requirements for non-flying roles within the unit, a pilot must have 1000 hours rotary experience, while rescue crew members are selected from within the firefighter ranks as needed and trained for the specific role. From there, each crew member can train to cover the other positions within the aircraft and move up to the flight officer role when deemed ready.

Bryce Mitchell is the epitome of gaining all the right qualifications and making the right sacrifices to be the first internal pilot candidate. After being a cadet and watching the delivery of what would become Copter 1 for the agency, Mitchells’ mind was made up; he wanted to fly a helicopter for the agency. As he continued to accrue years of firefighting experience, Mitchell also went on to gain his fixed-wing rating initially, then moving on to helicopters, acquiring his commercial license, then his CFI rating. Finally, buying an R22 and opening a flight school on his off days to continue building hours, even going as far as relocating to an RV to pour every spare cent he had into gaining more flight experience, should the opportunity arise to fly for the agency. 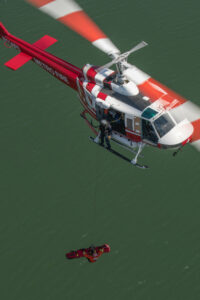 Michell stated that other primary flight crew members, seeing the road he traveled, began to take similar paths. Two of them jointly purchased an aircraft to begin completing their ratings, then moving on to helicopters, hoping to be the next in line of logical choices for the agency to make the step from primary flight crew to the pilot seat in the future.

Both aircraft are fitted with Simplex (now DART) tanks that are identical; both feature high skid landing gear to accommodate the tank, along with NVG capable instrument panels, dual G3X 10-inch touch screen map displays that are IMC capable. Currently, ship 1, the primary response aircraft, is fitted with an Aerocomputers moving map system, with plans as budget allow to purchase and install an additional system into ship 2 in the future. Each operational aircraft also operates a non-mounted iPad with Foreflight and fire-specific applications such as pulse point for dispatch operations during flight operations. 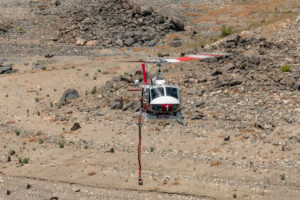 Each aircraft operates six radios to cover everything from aviation frequencies to firefighting operations. Search and rescue operations are completed with a 600lb capacity Goodrich Winch system, featuring a 250-foot cable for use by the winch operator. Ship 2 currently features an internal hoist that will eventually be replaced with an identical external Goodrich hoist for consistency as the budget allows.

Each aircraft is equipped with a Becker Avionics PA system and internal audio, which is often used when conducting search and rescue operations to communicate with the party being rescued before a rescue crew member is lowered. 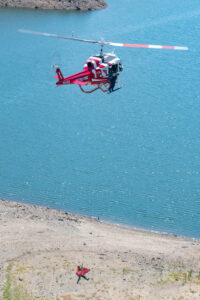 Over the last several years, as agencies have retired the Huey platform,  an increase in parts availability has been an enormous benefit for Sacramento Metro Fire. The additional influx also allowed for the purchase of what will eventually become ships three and four in the fleet that are currently in the early stages of the fit-out for the agency’s mission.

The agency is frequently called in for rescue operations where other agencies air assets either can’t get to where the rescue operation is, their hoist cable may be shorter, or their operational rules prevent them from operating into nighttime hours, where Sacramento Metro Fire has designed their program to be as fully capable of operating in the harshest of conditions, be it fighting fires or performing search and rescue, the agency that currently doesn’t work with a full-time budget is able to bat above its average thanks to the hard work and determination of everyone in the unit pulling for an above-average outcome to save lives through firefighting and search and rescue. 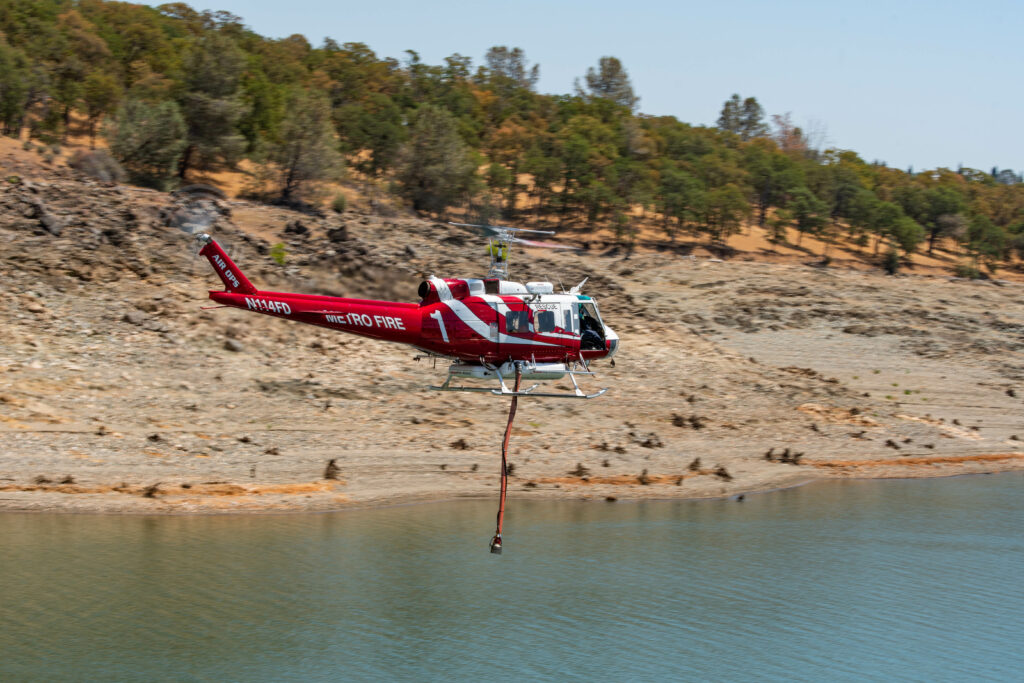