Having worked in the agricultural aviation industry for over 20 years, Bill Garrison’s entry into the aerial firefighting world was somewhat non-traditional. Garrison started working in the ag aviation industry in 1996, starting his own company Ag Air Services Inc., in 2000. After many years flying multiple types of ag aviation aircraft, Garrison’s operation settled on Air Tractors, flying the AT-301 and two AT-400s serving Kansas and surrounding states. 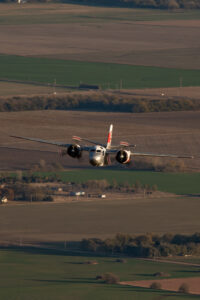 The AT-301 began his aerial firefighting career in Kansas after being approached to assist in dropping water on some smaller fires over several years by local agencies.

In 2017, the wind-driven grass fuelled Highland wildfire tore through Kansas, garnering national attention, scorching over 7,000 acres, and forcing thousands to evacuate. At the time, Garrison called the Fire Chief in Nickerson, Kansas, to see if he could assist with the blaze. The Fire Chief told him to bring whatever he could to help. Over the next eleven hours fighting the Highland fire, Garrison would drop more than 20,000 gallons of water alongside the only other air assets available, a pair of Kansas Army National Guard Black Hawk helicopters using Bambi buckets.

During firefighting efforts over the Highland fire, Garrison realized that there was a lot of heavier brush in some areas. He felt that a bigger airplane would be better for aerial firefighting than the Air Tractor he was using with just a standard agricultural gate.

Garrison’s first thought was potentially the much larger 800-gallon Air Tractor AT-802F. However, at over a million dollars, it was too large of an investment to make on something that may not make enough money back to support it. So he began to start looking for an available and affordable solution. “I’d kind of narrowed it down to a Neptune or Tracker. As for the Neptunes, we looked at one that Evergreen used to have, but it had been sitting outside way too long and started having corrosion issues, so that ruled out the available Neptune at the time.” With Evergreen’s Neptune out of the running, Garrison then stopped in California to look at some S-2 Trackers that were available and found several more located in Carson City, NV. 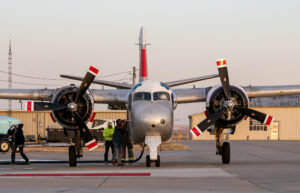 In Carson City, Garrison met Rick Clements, the Cactus Air Force Wings and Wheels Museum owner, who had two Grumman Trackers that the museum had purchased as surplus aircraft from CAL FIRE. Garrison looked over the plane, telling Clements what he wanted to do with them, eventually striking a deal to buy a flyable Tracker from the museum.

Several months later, Garrison and his mechanic, Tim Coons, arrived back at the museum in Carson City to start working on getting one of the S-2 Trackers into airworthy condition. In addition to the mechanical work that needed to be completed, the data plate had been lost when the museum purchased the aircraft as surplus from CAL FIRE. Garrison had to obtain a data plate reissue from the FAA. Additionally, a maintenance program needed to be written for the veteran aircraft. A ferry permit was also required to fly the Tracker from Carson City back to Kansas. 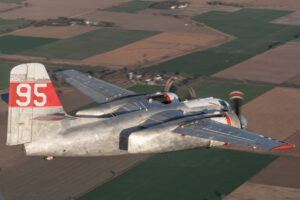 The process of getting the Tracker flying again wasn’t considered problematic. However, it was more time-consuming than anything, said Garrison about the overall experience of bringing the S-2 back to life. Everybody involved in getting the aircraft ready to ferry, including Garrison, had extensive maintenance experience, not so much on S-2 directly, but a great deal of expertise on radial engines. The two spent the next two months working on the S-2 at the museum in Carson City, spending money on hotel accommodations and copious parts purchases. Along with 16-hour workdays, that was what it took to get the aircraft airworthy for its eventual ferry flight to its new home base at the Hutchinson Regional Airport in Kansas.

Upon the aircraft’s arrival at its new home, the additional work of getting the aircraft ready to fight fires began. Due to Garrison having to keep up with the ag spray season during the summer months, the complete restoration would take Garrison the better part of a year. During this time, he replaced all of the oil and hydraulic hoses, then moved through the rest of the associated systems to get the S-2’s four-door, 800-gallon belly tank/ fire suppression system operable. Upon the aircraft’s retirement, CAL FIRE had disabled the aircraft’s wing fold system, which Garrison chose to leave as it was for the time being. The next order of business was getting the Automatic Dependant-Surveillance Broadcast (ADSB) installed and radios using the same band as the Kansas Forest Service’s (KFS’s) radio equipment. Meanwhile, Garrison was also working with the Federal Aviation Administration (FAA) to issue an airworthiness certificate. 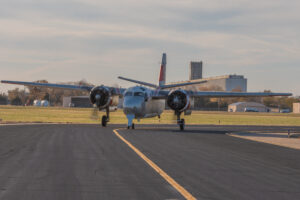 Initially, Garrison had bought three engines for the S-2 in cans from a salvage dealer in the Denver area, which was the total of spare parts he had while bringing the aircraft online. During a type rating check ride, one of the engines on the S-2 failed, which quickly used up one of the spare engines, bringing the replacements now down to two. Since then, Garrison has bought another S-2 in military configuration, which he is currently using as a parts aircraft for QECs (Quick Engine Changes), and other spare parts as needed.

Garrison also has a good relationship with the Wichita Flight Standards District Office (FSDO), who he asked to come out several times during the restoration process, so there was knowledge of the aircraft when it came time for the issuing of a new certificate for AAIP (Approved Aircraft Inspection Program). “While it took a little bit, I would say it went pretty darn smoothly,” Garrison stated. 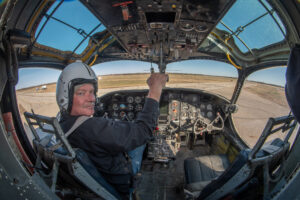 Kansas’ fire season, unlike west coast seasons, typically runs from late November through May, which is when Garrison then switches back to ag spraying in the summer months. Garrison currently foots the bill for his labor of love, restoring the S-2 and using it to fight fires. “The Forest Service didn’t front any of the money for this. I was doing it on my own, in the hopes that if I could do it, and do it right, I could get a contract.” As one might imagine, the KFS had been interested in seeing Garrison’s progress and if he would be able to get his air tanker project off the ground. So, while all of the maintenance, flight training, and preparations were at his own expense, Garrison knew that if he could have the airplane up and running, they would call when they needed him. Nearly a year after its ferry flight to Kansas, Garrison’s Tracker was finally ready to fight fires, receiving a two-year call when needed (CWN) contract with the Kansas Forest Service.

Despite all of the work and effort that had gone into getting the aircraft airworthy and once again ready to fight fires, perhaps one of the most challenging aspects of the entire project for Garrison was dealing with all of the different agencies involved in getting an aircraft such as the S-2, which is only currently in use as a turbine in California, approved for use. 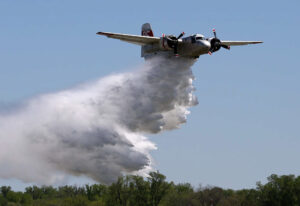 Garrison was able to get through the hurdles and red tape by remaining determined and focused on getting this program started while also doing his best to maintain good working relationships with those various government agencies throughout the process. Now that his aircraft is finally in the air and performing the missions he had purchased it to do, Garrison takes great pride in the fact that he has “proved that it can be done and even though it was an older aircraft and everybody thought I was nuts – I’ve proved everybody wrong.” Looking back on the entire project as it has come together, Garrison is very happy with how it has all come together and can’t put his finger on any one thing that he regrets or wishes went differently than it did, except perhaps that he may indeed wish that he had gotten a second, flying S-2.

The S-2 tanker can respond anywhere in the region in a matter of minutes, whereas it may take the National Guard hours to ready their aircraft. Garrison has flown his Tracker under contract on three fires so far this year, and now that the first fire season of his two-year CWN contract is under his belt. 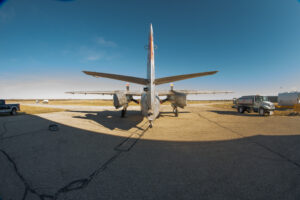 Chris Hanson, the District Fire Management Officer for the Kansas Forest Service, stated that while unconventional in its inception, the S-2 program has proven to be a welcome addition to the state’s aerial firefighting program. It has evolved from its initial beginnings to be a program that now utilizes a state agency member as a fire management officer with Garrison in the cockpit that acts as a fire controller in the air onboard the S-2 during fire operations directing the state’s role in the firefighting effort.

Hanson stated that since the program’s inception, the S-2 had flown operationally for 81 hours on fires over the last several years, fighting everything from small fires to 10,000-acre fires like the Cherry Creek Fire in Cheyenne County.

While the aircraft-dropping retardant is still an option, the complexities of Kansas having to set up retardant bases is still a somewhat far-off option in the future due to the logistics involved for the state, said Hanson. 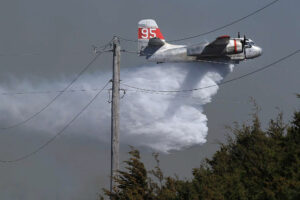 Garrison and the Kansas Forest Service also spend a great deal of time educating local fire agencies on the operation of the S-2, often flying the aircraft to different airports around the state to teach local fire agencies how to reload the aircraft with water so that when there is a need for local assistance, the response from local firefighters is swift and speeds up the refilling operation of the aircraft while completing the refilling in the safest manner possible for the ground units assisting.

When compared to other programs, Garrison’s S-2 program is most certainly still in its infancy. However, from Garrison as the pilot, down to the maintenance crew, ground operations staff, and the cooperation from the State of Kansas; all involved are doing their best to ensure that they do everything right, every time – adhering to a ‘crawl, walk, run’ approach when it comes to this unique air tanker program. 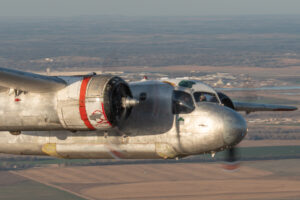 Deconfliction over fires can be a complex issue on extensive fire grounds; however, much of the time, Garrison is the primary or only responding aircraft, unlike many other more congested fire grounds seen in other states. Usually, the only other aircraft on the scene would be the Black Hawks from the National Guard, if they’ve been requested, which typically only occurs after several hours of being on a fire ground. Hanson stated that the state response to fires is relatively quick, being that a local agency can request help from the state. The state then puts Garrison into action, sometimes within the same hour. In contrast, if the National Guard is asked for, that has to go through the national requisition process, which must go through NIFC and then on to the National Guard request process, often taking several hours for the aircraft to get on scene. 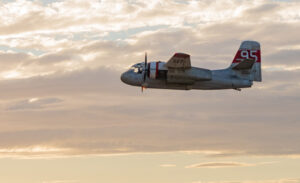 While Kansas may not be at the top of the list when you think about fire danger, the state does have years that could be devastating without the intervention of the Kansas Fire Service and their ability to employ the use of a non-traditional system like that of Bill Garrison’s S-2. The teamwork between Garrison and agency representatives like Chris Hanson, who strive to make a difference in aerial firefighting, shows that the future of the industry in Kansas looks bright. 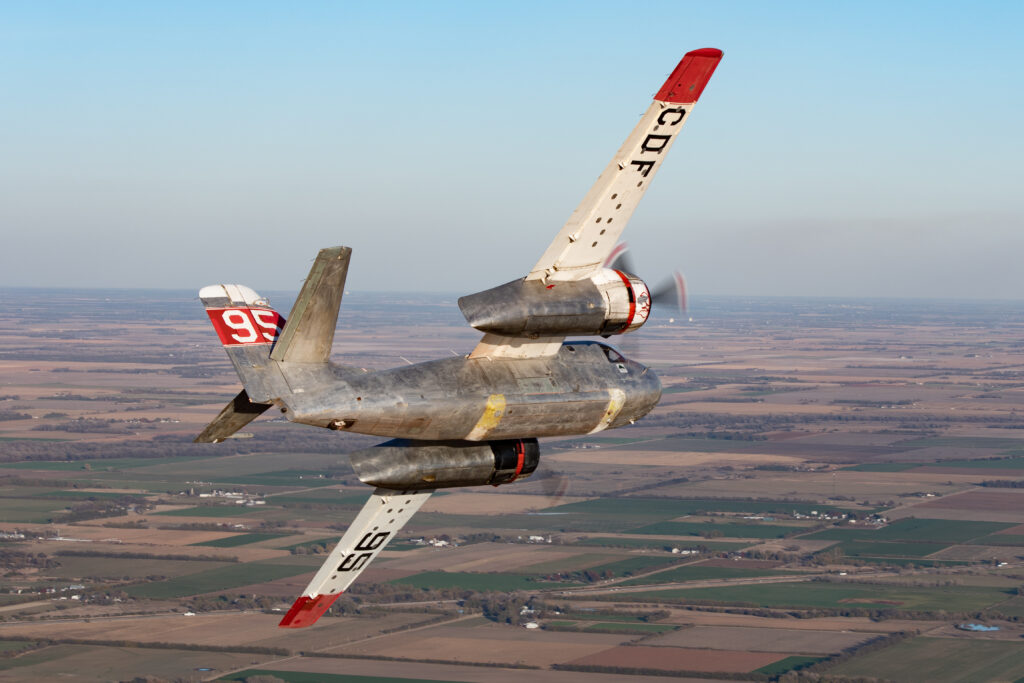