Growing up on Catalina Island in Southern California, helicopters became a mainstay in Kyler Burke’s life at an early age. His mother owned a business on the mainland and would often take the 15-minute flight to the mainland instead of the hour-long ferry ride. As the story goes, she was light, and he was small, so the pilots frequently found enough room for him to tag along. As if this wasn’t enough to convince young Burke to learn to fly, he was also childhood friends with the son of the founders of Island Express Helicopters. Burke explained that his friend’s dad was one of his childhood heroes. 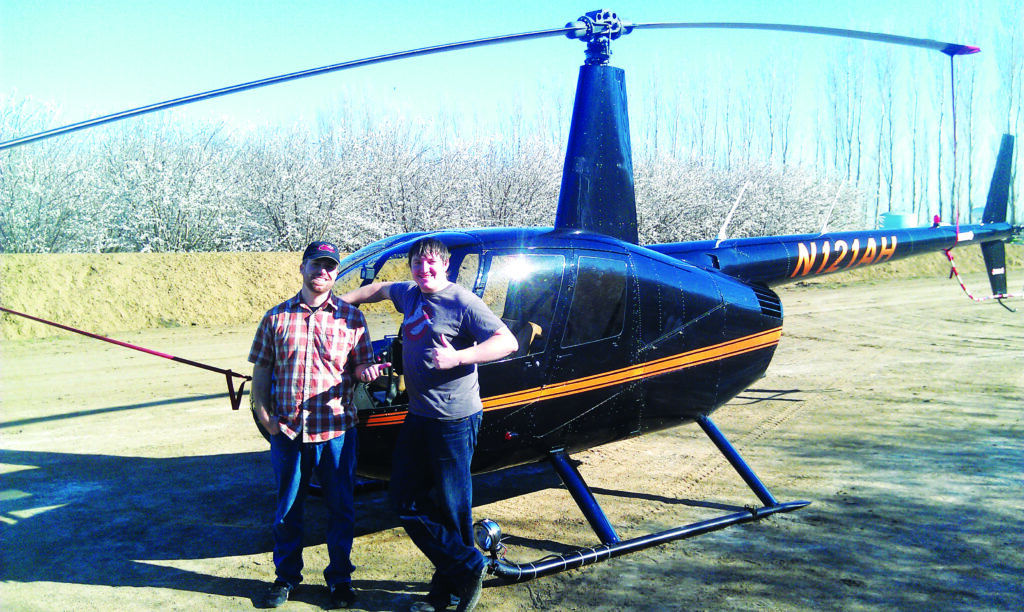 During his junior year of high school, Burke met the girl who would later become his wife. Though they went to different schools, they quickly became serious about their futures, and as Burke kicked around a plan of possibly joining the Army to pursue flight school. She explained that she had zero interest in becoming an Army wife. Faced with the daunting notion of trying to become an aviator in the Army and the growing desire to one day make this lady his wife, Burke decided to take the civilian flight training route but shelve his rotary wing dreams for a while and look for a regular job right out of high school. 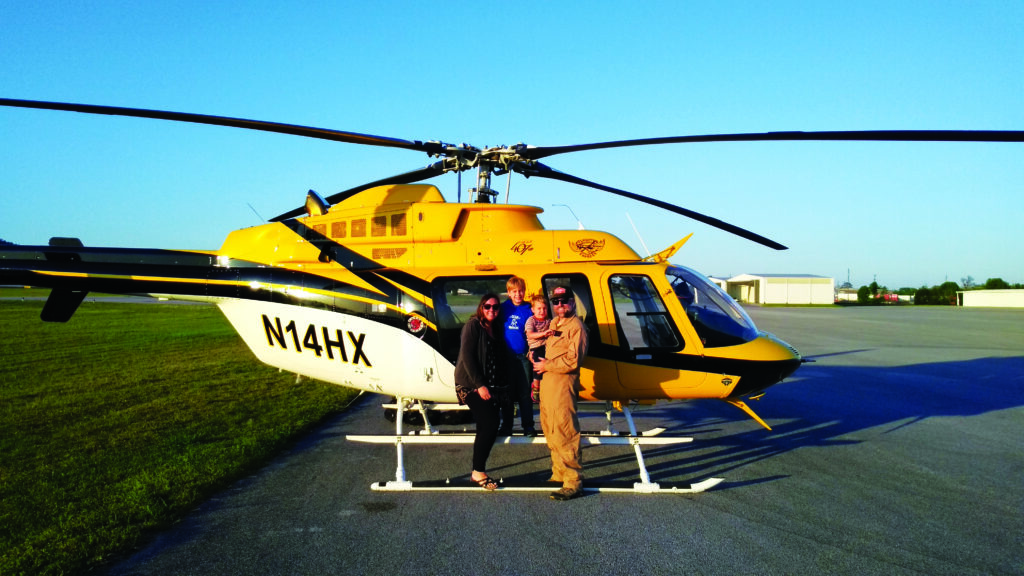 One day, while living and working in Orange County,  California, Burke arrived at work, and a co-worker looked at him and said, “Hey didn’t you tell me you wanted to be a helicopter pilot?” Burke replied, “Yeah, I don’t recall mentioning that, but yes, I do.” His co-worker continued, “well, I heard a commercial on the radio this morning, and they say they’ll take you from zero to flight instructor, and then you can become a commercial pilot… I’m even thinking about doing it.” Burke couldn’t attend the seminar announced in that advertisement but decided to hop on his motorcycle a few days later and ride up to Chino to check things out. “I was 19 at the time. I didn’t know a lot, but I had a hunch that piecemealing my way through flight training and paying by the hour as I was able probably wouldn’t work for me. Then Silver State came along and said, we’ll take you from zero to hero for $60k, and I thought, well, I can get financing, go after it, and get it done. So, that’s exactly what I did.” 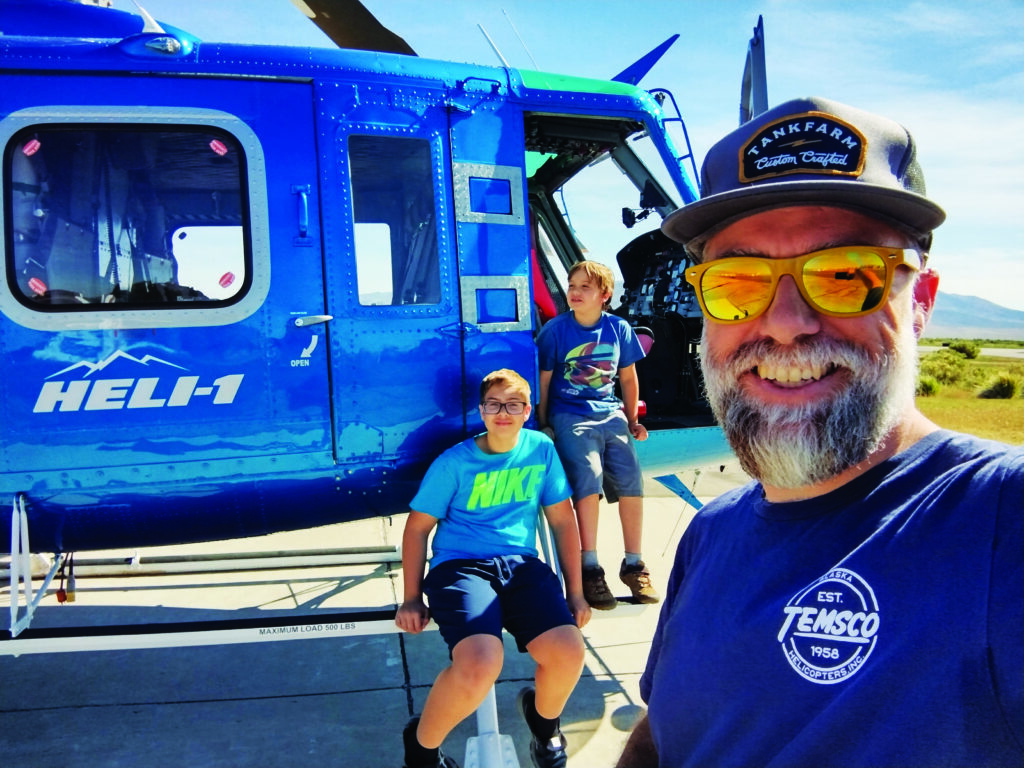 It was a slow start for Burke and the first batch of trainees in Silver State’s Chino program. There were roughly 120 students and only one R22 at the time. “In the beginning, all we did was study and put time on the simulators,” recalls Burke. Eventually, the program began to work out its early kinks, and Burke and his classmates progressed through their flight training and later became flight instructors working for Silver State. Burke had been working for the company as a flight instructor in Jacksonville, FL, for about eight months when one day in December of 2007, he and a student had an Overspeed in a practice autorotation in a Robinson, and Burke was fired because of it. “Which was probably the best thing they could have done to me because I moved back west to Redding, CA, and took another job as a flight instructor. By February of 2008, Silver State folded, and 350 of my friends were out looking for jobs on the same day. Unfortunately for some, what happened with Silver State ended their careers.” 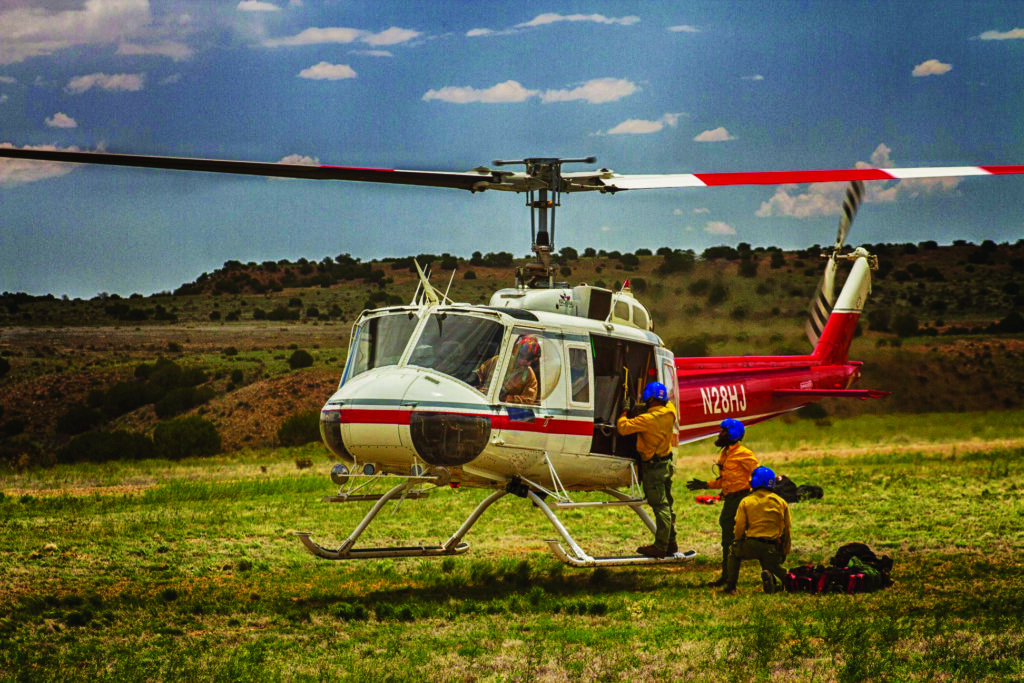 Luckily for Burke, the summer of 2008 ended up being a hectic year for fires on the west coast, and that summer, tons of aircraft showed up at his airport to battle the SHU Lightning Complex Fire in the Shasta Trinity National Forest. “I had never really considered firefighting; I thought the idea of flying long line fighting fires was nuts.” He explained.

One day Burke met up with a pilot flying a Huey for Withrotor. After going out to lunch with that pilot and his crew, he and the pilot exchanged their contact information. A week or two later, word got back to Burke through another Withrotor pilot that the company was looking for a relief copilot on S61s. “He put me in touch with the owner, and I brought my resume – three days later, I was flying in an S61 as a relief copilot, and that’s what catapulted my utility career.” 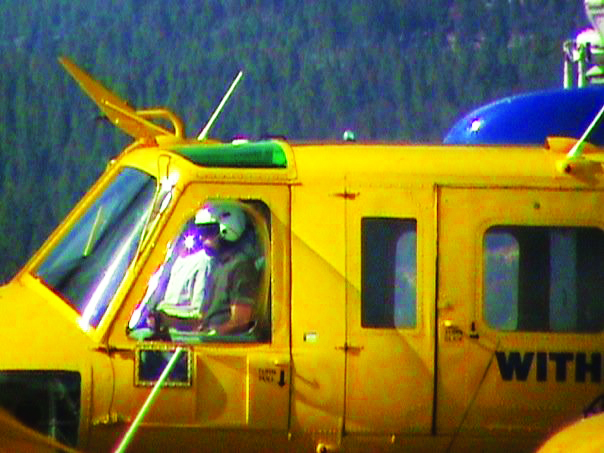 Burke continued to work at Withrotor for the next couple of years. While it was still several years before he could make a decent year-round income, that job was an excellent opportunity for him to build time, learn to fly Hueys and long lines, and gain much more exposure to utility flying.

Burke took whatever gigs he could get for five to six years to build his skills and hours. Luckily, many of his contracts gave him turbine and medium time. Unfortunately, that was not always the case. There were also times when he had to return to flight instructing, making just enough money to fill his gas tank, and he augmented his income with web design and graphic design work. Undaunted, he continued to hustle until he finally hit 1500 hours and managed to get on year-round as a line pilot with PJ Helicopters. There he flew missions like aerial firefighting, LiDAR inspection, and patrolling power lines to law enforcement recon and short-haul and charter work.

Like many others in the business, some of his greatest personal satisfaction comes simply from ending a day of safe operations, primarily when he has supported the men and women on the ground, protecting lives and property.

As Burke’s career has progressed in utility and firefighting, in recent years, he found himself transitioning from being a line pilot to spending time as the Chief Pilot at two different helicopter operators in the Northwest. Burke explains that the biggest challenge of being a Chief Pilot is what energized him the most about the role – acting as an advocate for the pilots and the company. “At the end of the day, what the company wants from the pilots is safe, profitable operations and loyalty. What the pilots want out of the company is compensation, safe aircraft, and career stability.” Not so different in their ideals, but there can be quite a bit of maneuvering involved in getting the two sides to line up, even if it doesn’t align perfectly every time.

Burke also notes that as he returns to the line, his perspective has forever shifted from one of just personal logistics such as: “Is my aircraft airworthy? What is my project today, and where are we ending the day?” to one of a wider field of view and greater introspection with thoughts like; “Who am I? What are my motivations? Who are we as an organization?” Burke enjoys weaving into his consideration the cultural aspects and values of the company, right alongside his mindset and beliefs. “Weirdly, I liked forming SOPs; I also loved the responsibility of hiring, placing, and mentoring people in their new positions. Those guys have remained friends and colleagues to me, and it feels really good to help make a great team.” He hopes to continue doing these things, regardless of role or title. 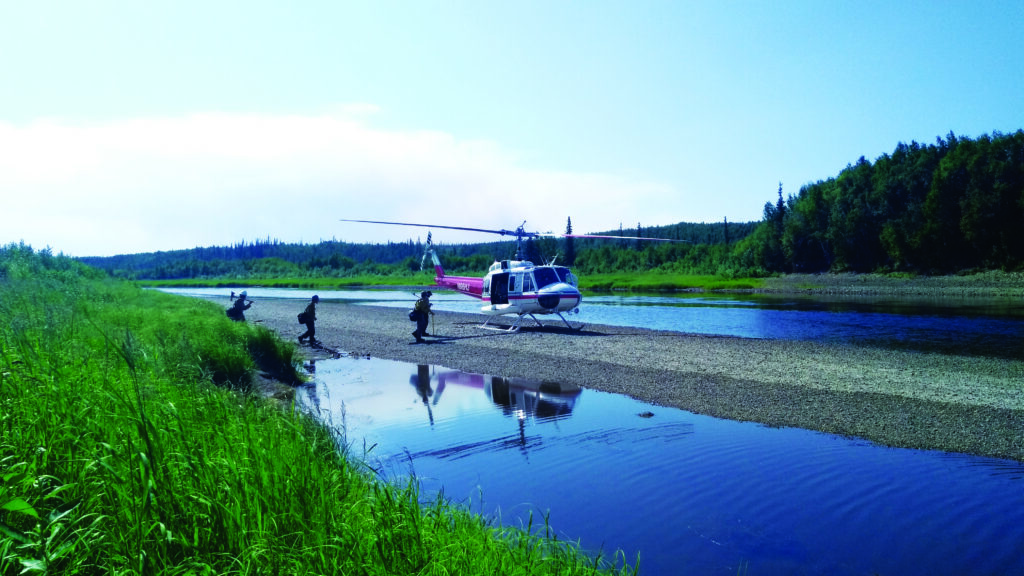 Much like one of his mentors Gary Wiltrout, Burke takes to heart his faith and strives to exemplify that in how he flies, relates to people, and serves the people around him. “I hope that when it’s my turn to retire, people will similarly think of me. I am grateful for my encouragement and what I was able to teach and share with them because of how grateful I am to Gary for having that influence on me.”

Burke believes that one of the greatest things instilled in him by his mentors was the encouragement to stick to his guns and his values. There are always opportunities to cut corners to get the job done or save money, but he feels like those points can also be tipping points leading to potentially unsafe practices. “It was difficult at times to follow my convictions and do what I felt was right, but later finding out that people noticed what I did and echoed that I did the right thing is a really good feeling. It’s probably one of the biggest things that have kept me safe and alive. It’s not always easy to stick to it, but it’s the right thing to do.”

It took a lot of varied experiences in different types of aircraft to get to where he is today. For those interested in exploring fire or utility flying, Burke suggests that bringing a positive attitude, a willingness to work hard, and wearing multiple hats can mean the difference between getting those golden opportunities during a flying career or not. “Back when I was a low timer, I did graphic design and IT work for one of the companies I flew for, and that convinced the owner to keep me on through the winter when many of the other pilots were just seasonal. Even today, they wear the t-shirts I designed 13 years ago.” 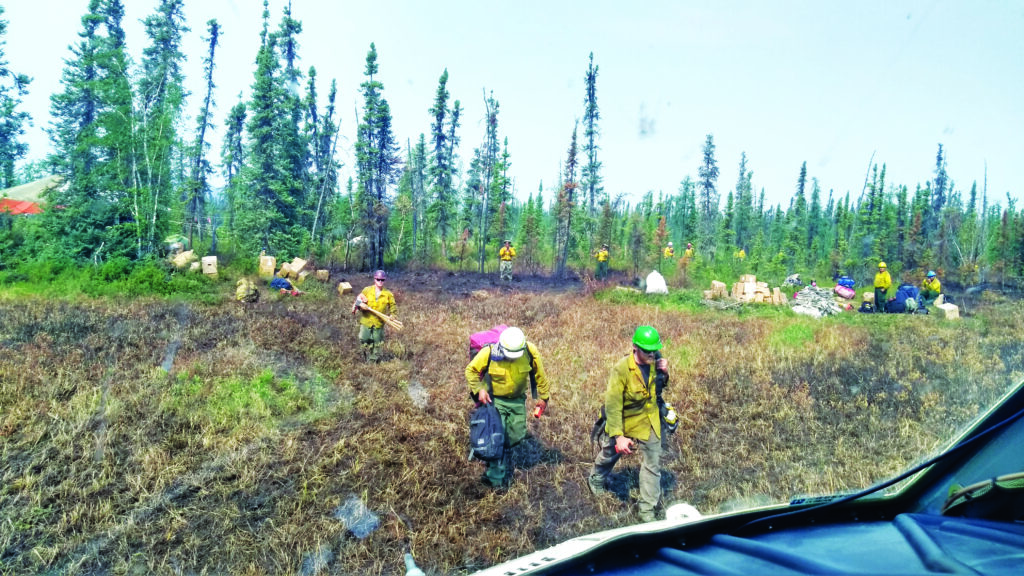 Finding ways to make yourself more profitable to the company and showing your loyalty can be crucial and make the company want to invest more in you. He also advises that it’s easier to pay one’s dues and do those low financial reward opportunities when “you’re still young and energetic” because it’s harder to afford to do them later on. The experience gained will pay dividends later on and likely develop a career faster.

At nearly 4,000 hours into his career, Burke still feels most at home behind the controls of many of the Bell products found over fires in North America. Specifically, he is most fond of flying the Bell mediums, especially the 205, UH-1, or 212. “Whether it is utility work or fighting fires, I love how they feel and maneuver. There’s something so cool about getting in that groove and flying buckets or doing various lifts in a Bell medium all day.”

Not surprisingly, while the flying he’s done has evolved over the years (and continues to evolve today), he continues to enjoy the fulfillment of the many great relationships he’s formed while loving doing what he has always known he was meant to do. “You don’t get into helicopters because you think it’s lucrative or prestigious; there are no guarantees; it takes a lot of hard work and hustle. You get into helicopters because you believe at your core, regardless of how logical or illogical it is, that flying helicopters is what you were meant to do and maintain the conviction to stick to it.”

Comments
Previous articleFighting Fires in the Brazilian Sugar and Alcohol Complex
Next articleDown to the Last Drop!